Commercial bins to be taken off roads and pavements 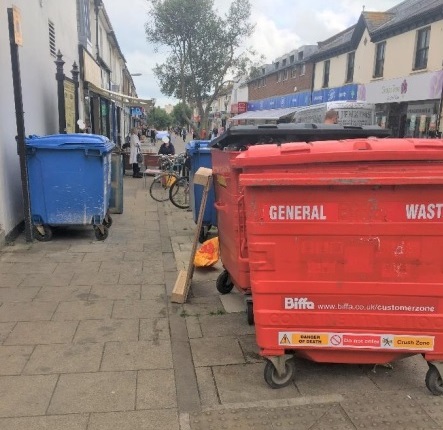 City centre businesses who keep their bins on the pavement or road have until February to find somewhere else to put them or face a fine.

Brighton and Hove City Council have drawn up a list of hundreds of streets in central areas – including Brunswick, Hanover and Kemp Town – where businesses will only be allowed to put bins on the public highway at strictly specified times.

Businesses with an address in the areas, called time-banding zones, or T zones, will have an agreed day of collection, when they can put out their bins between 6am and 9am or 6pm and 9pm.

Even then, they must not block the pavement or road – and cannot be left out at other times, even if the waste is not collected. They cannot be placed in non-T zone streets either.

And all commercial bins throughout the city will have to display a sticker saying who they belong to.

Environmental enforcement officers will patrol the T zones and can fine businesses £110 if bins are put on the highway outside their assigned times.

The plans were nodded through at a meeting of the council’s environment, transport and sustainability committee in June, after a public consultation.

A report, written by the council’s head of service improvement and modernisation Lynsay Cook, said the council regularly received complaints about bins on the highway.

She said: “Brighton and Hove City Council previously enforced against commercial waste bins on the highway but this service stopped in approximately 2009.

“Since this date there has been a proliferation of commercial bins placed in locations across the city.

“City Environment receives a number of complaints about commercial waste bins on the highway, including issues caused by their placement, the volume of them and the anti-social behaviour they encourage.

“Where complaints have been made about Brighton and Hove City Council commercial waste bins, efforts are made to find alternative locations or recommend that the business uses the trade waste sack service, if they are in the permitted area. Where other complaints are made, council officers have requested they are moved, but this is not always complied with.

“It is recognised that times are hard for businesses at present. However, there needs to be improvements as to how commercial bins are managed.

“Many businesses already store their bins or waste sacks on site and only place on the highway at the time of collection. This needs to be replicated in the T zones.”

The consultation received 522 responses, of which three quarters agreed bins on the highway were a problem in the city, and a third supported the introduction of time banding.

The list of streets in T zones and more details of the scheme can be found here.