A Hove seafront cyclist gives her verdict on ‘duplicate’ lane

Dear Councillors, I am very disappointed by the plans for the A259 Hove seafront and the so-called consultation process you have set up.

It seems like the council doesn’t want our opinion on this as the questionnaire is very weak and lacks important information about the impact these changes will have on residents and visitors to the area – just the usual dogma about the cycle lanes.

Hopefully, enough people will show their anger at these badly designed and unnecessary changes that these plans will be reviewed or even better halted.

But I’m not confident that will happen sadly and worry that the seafront in Hove is going to be as ugly as Brighton soon with plastic wands and a build up of traffic due to the reduced lanes and lack of parking.

Not great for those of us that live on the seafront or those that visit and park here for a day at the beach.

Having to cross the bike lane for access to the bus is the most stupid idea of all the plans and just shows how little thought has gone into this rush to get as many cycle lanes in the city no matter what the cost.

I hoped the council had learned from the disastrous Old Shoreham Road scheme to pay better attention to residents’ opinions and plan cycle lanes more carefully.

But no, yet again you want to plough on without careful planning and consideration of the voting public by giving us a token questionnaire with limited information.

Additionally, just two days in the King Alfred in December to meet with you was disappointing as sadly I was unable to attend even though I really wanted too. The timing was just not possible for me and I doubt I am alone.

I am a keen cyclist and ride along the seafront every day and do so all year. I also walk along here most days as I live in a flat and don’t have a garden so this space is hugely important to me and many other residents in Hove.

The loss of another lane of traffic to add a second lane is going to cause traffic build up for no reason.

I have lived and cycled on the seafront for 11 years. I have a good knowledge of how many bikes use these lanes and even if the amount of people using them increased fivefold it still wouldn’t need an additional lane.

There is never congestion on the bike lane even during the busy summer months but there are issues with people trying to park and these plans will reduce the amount of parking spaces – so again, badly planned.

Another massive issue for me is the ugly plastic wands you have used in Brighton and plan to use here too.

They are not environmentally friendly. They look unsightly and they make the seafront look like there is permanent roadworks. 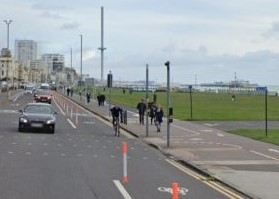 I have also seen drivers ignoring them and cutting into the bike lane to get around traffic turning right on the seafront near Brunswick and Palmeira because you have removed the second lane and stopped the flow of traffic.

Nothing about these plans is good. It’s all pointless and will not improve the area or safety of cyclists (or pedestrians) as the current cycle lane on the pavement is much safer has no car doors opening on to it.

The number of people still refusing to use the new lane on the A259 in Brighton is a testament to this.

I sincerely hope that enough people have heard about your plans, as they have not been widely publicised, to stop these terrible mistakes happening.

Why the council ploughing money into a bad scheme in an area that already has a great cycle lane rather than using the money to add lanes on roads that currently don’t have cycle lanes, of which there are many in Brighton and Hove, is utterly incomprehensible to me.

This just shows how little attention is being paid the real issues regarding encouraging active travel and is just a way to get money from the government and pat yourselves on the back.

I am sure there are many other roads in our city that would benefit from this funding and help encourage people on to bicycles but you are choosing the easy way out by just making the great cycle lane we already have bigger.

It’s a total waste of our taxes that will achieve nothing except to make residents angry and put tourists off coming to Brighton and Hove.

Joanne Heuston is a Hove seafront cyclist and resident.