Reef surf a wave of adulation in Brighton 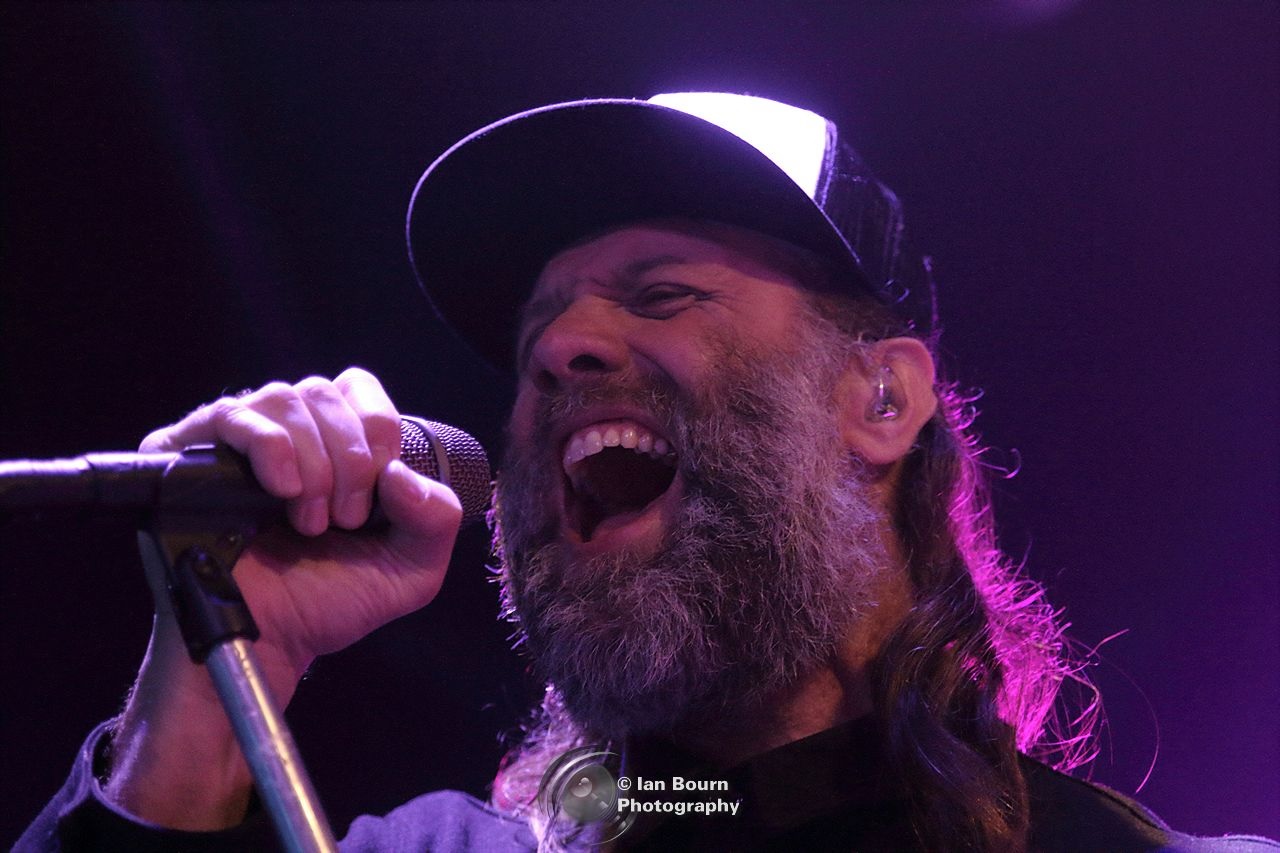 Reef formed in Glastonbury and came to prominence in the mid-1990s with their lively brand of blues-tinged, surfer-dude classic rock. Having signed a deal with Sony, their single ‘Naked’ featured in a TV advert for that company’s MiniDisc format, which helped push the debut album ‘Replenish’ into the UK Top 10. Follow-up release ‘Glow’ topped the UK charts in 1997 and provided Top 10 singles ‘Place Your Hands’ and ‘Come Back Brighter’. The former was re-worked into a theme tune for the ‘It’s Your Letters’ segment of cult TV show ‘TFI Friday’, raising the band’s profile still further. Two further albums followed, which were popular but couldn’t quite match the success of ‘Glow’. By 2003, Sony were losing patience and a proposed fifth album was shelved, the recordings reduced to providing four new tracks on a greatest hits compilation. The band split shortly afterwards, with members concentrating on solo projects. 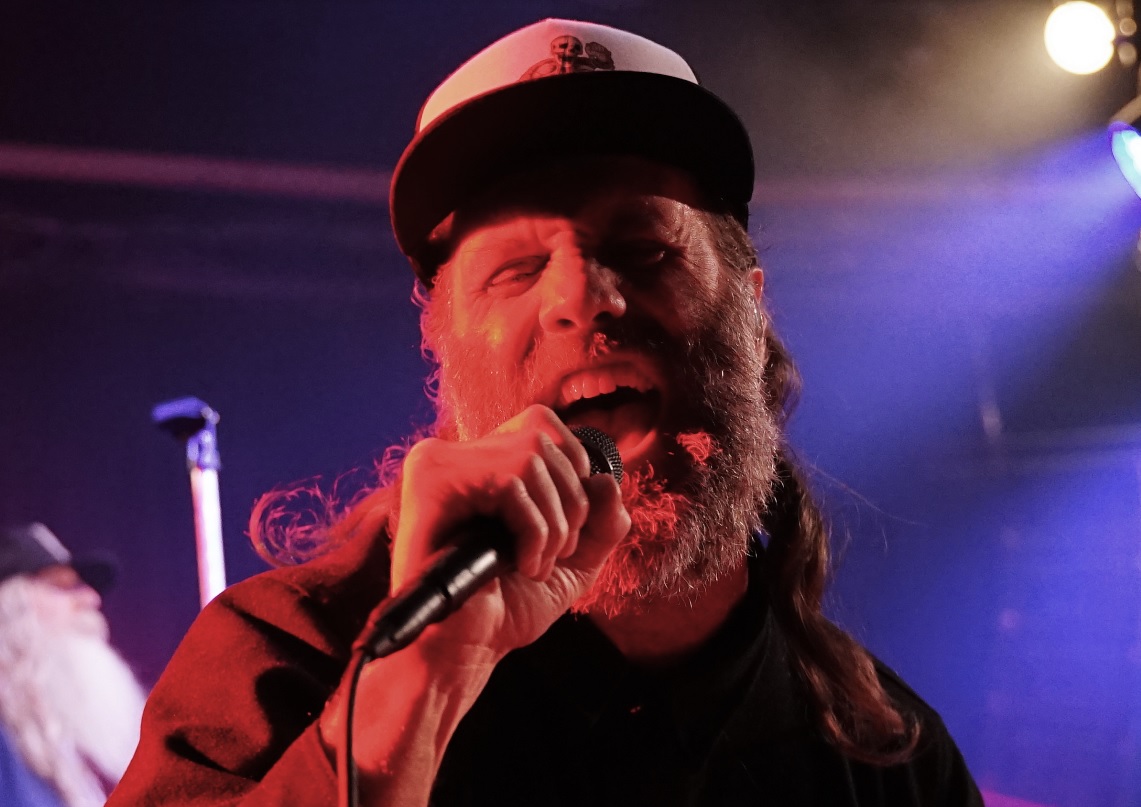 Having reconvened in 2010, Reef continued as a popular festival act, albeit with some lineup changes. They returned to recording with 2018’s ‘Revelation’, and there has been a notable buzz of anticipation in advance of ‘Shoot Me Your Ace’, their sixth studio album, released on 29th April 2022. The accompanying tour rolls into Brighton’s Chalk venue tonight, amidst considerable excitement. 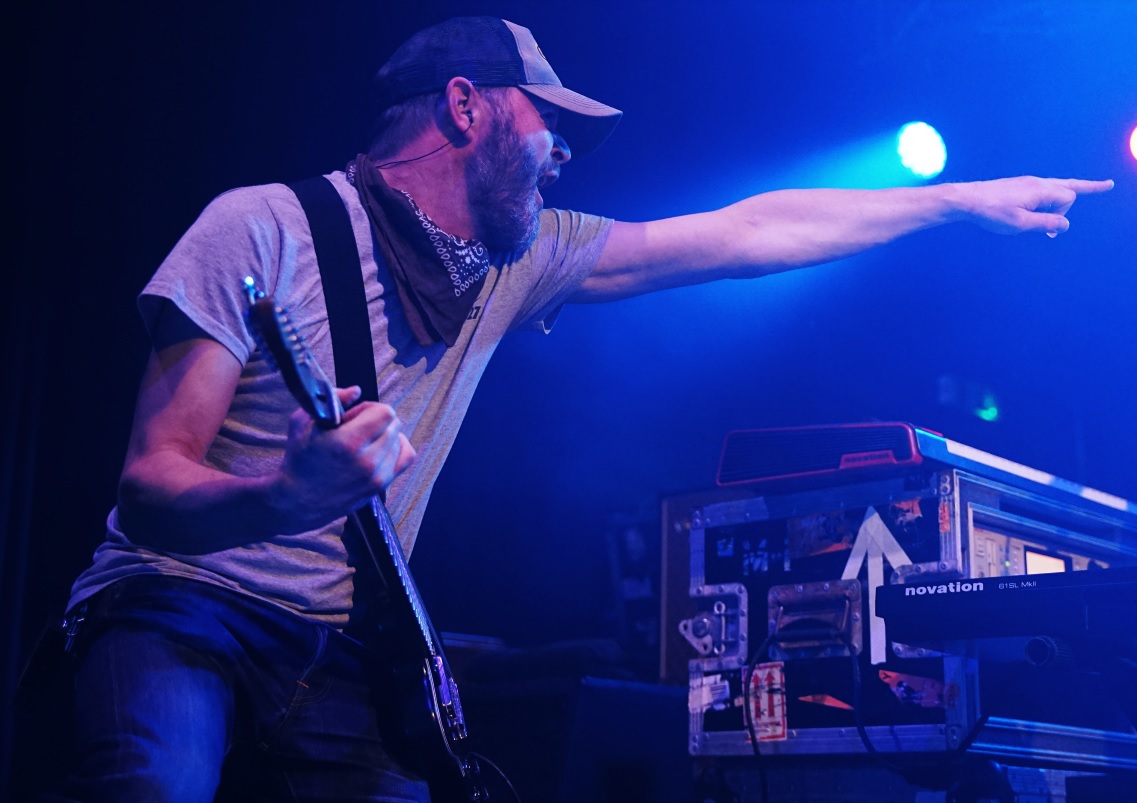 Support is from alternative rock band A, from Suffolk. Their third album, ‘Hi-Fi Serious’, hit the charts in 2002, with accompanying single ‘Nothing’ reaching the UK Top 10. The band takes the stage to a respectful cheer. It is something of a family affair. Jason Perry is out front, with his twin Adam behind the kit, and their brother Giles on keyboards. House left is long time friend Mark Chapman on a left-handed guitar. Across the stage, bassist Tim Hillier-Brook, the most recent recruit, completes the lineup. Unusually, they have nothing to promote, having released no new albums since 2005, but they continue to tour. Jason is doubtless kept busy by his parallel career as a record producer. 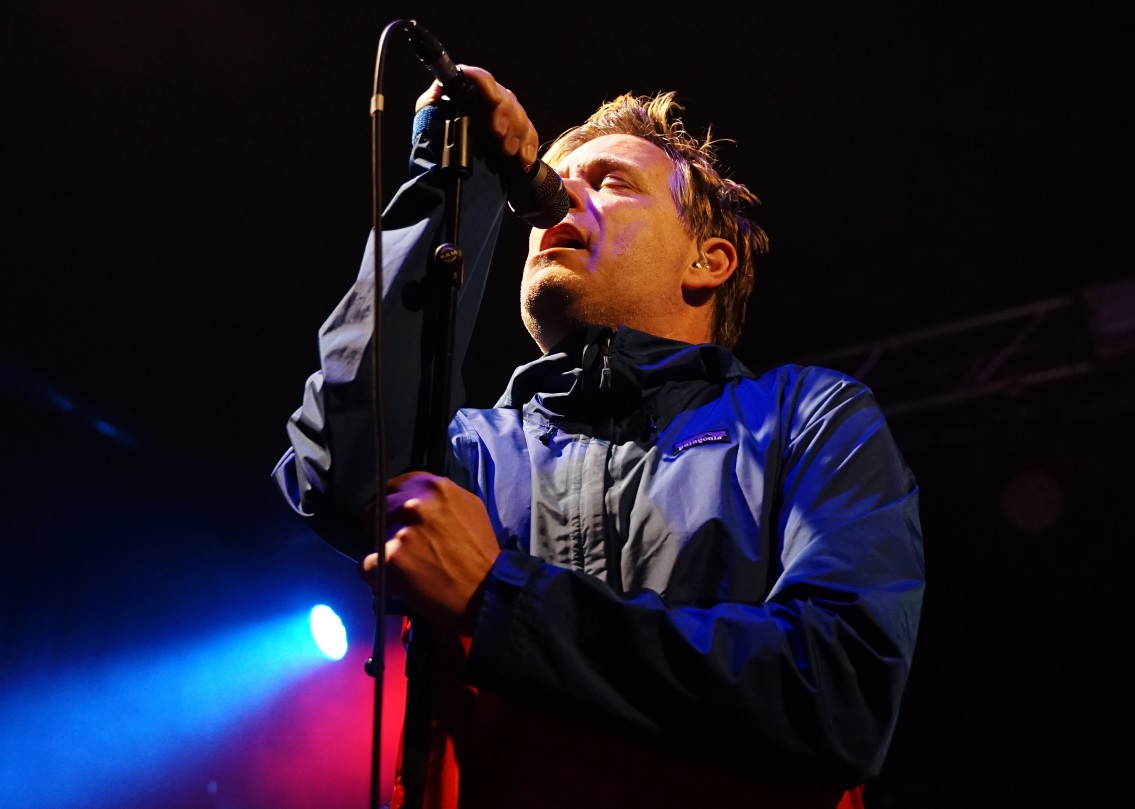 It’s warm indoors, but the frontman is bundled up in a red and blue anorak. It’s certainly keeping his humour dry, and very self-deprecating. “We’re A, by the way. Sh*t name but we don’t care anymore. We’re too old to care.” Opening number ‘Took It Away’ is driven along by a sparse, bass-led groove, before expanding into a big, bouncy and very catchy chorus. Singalong hit ‘Starbucks’ has an accompanying arm swinging dance. While demonstrating it, Jason hints that he has a shoulder problem, so the coat might just be covering up some strapping. It’s a cracking song, and I’m impressed how many people around me know the words. I find myself joining in with a commendably enthusiastic crowd chant of the refrain “Don’t want your job in Starbucks.” 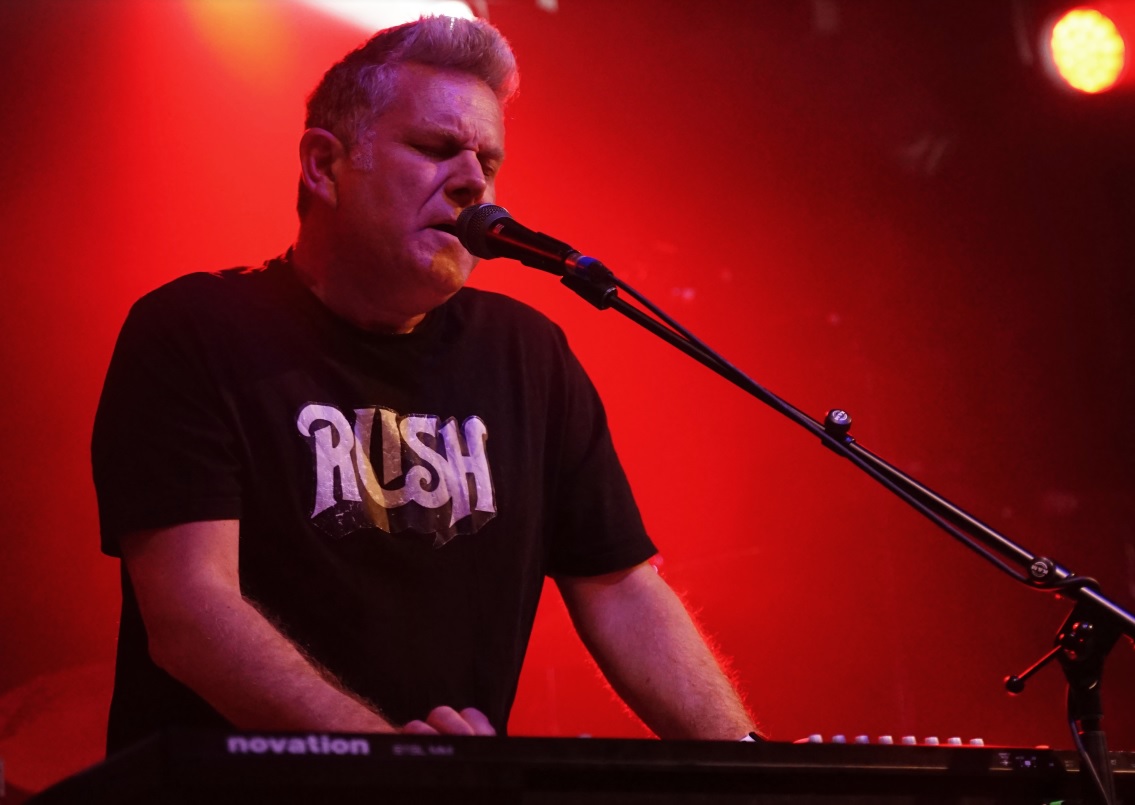 There’s some semi-serious chiding of the tech crew for not correctly synchronising the lighting to the songs. I’d like to think this is some sort of in-joke with the team, but it doesn’t come across very well to the casual observer, and makes the frontman appear a bit charmless. There’s nothing much wrong with the playing though, with Mark Chapman’s impressive guitar shining through a massive instrumental section concluding ‘Here We Go Again’ that flits between prog, psych and even a hint of jazz. Naturally, the big hit is saved for last. ‘Nothing’ is a huge air-punching chantalong, embellished with some nicely contrasting DJ scratching samples. It’s a fine end to the set, and a fine start to the evening’s entertainment. 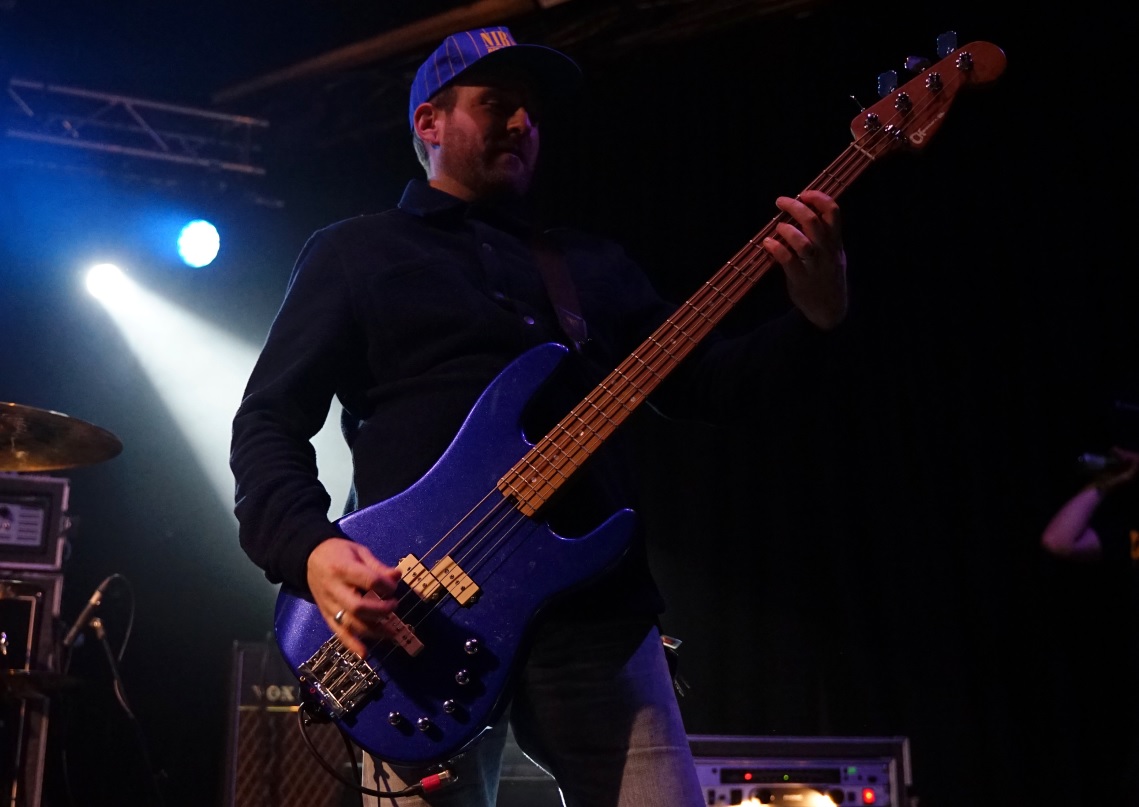 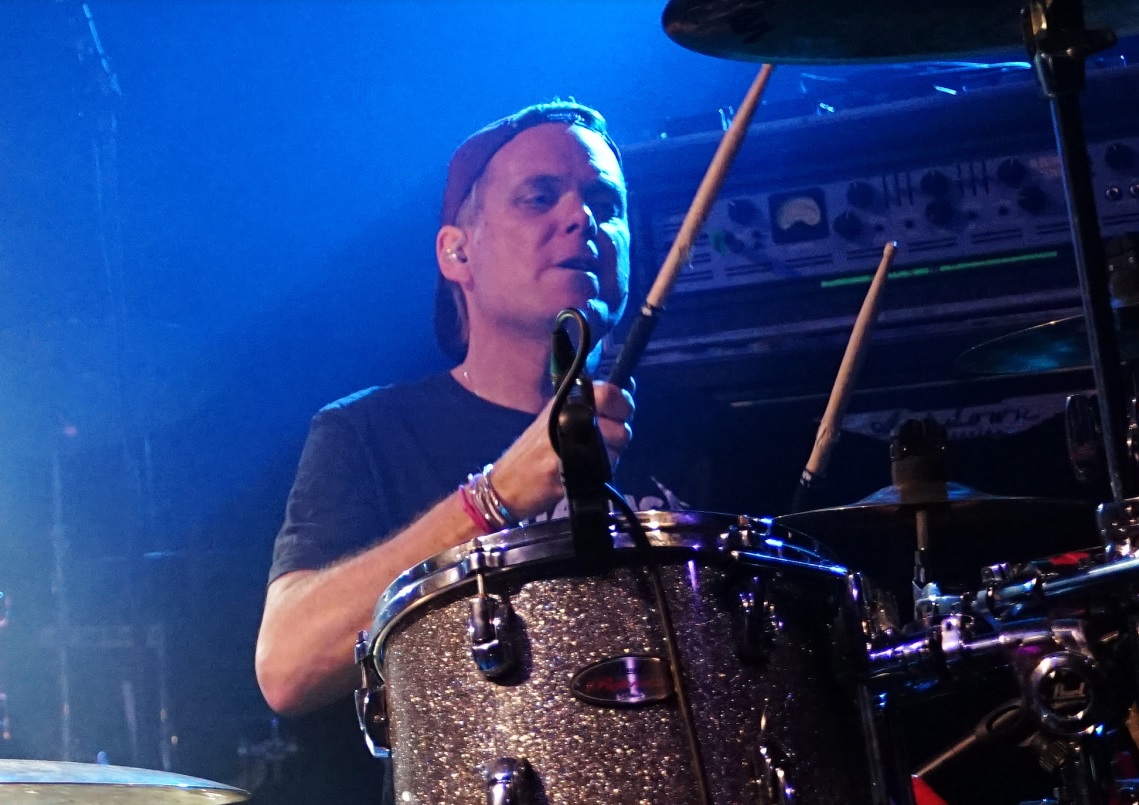 A setlist:
‘Took It Away’, ‘Something’s Going On’, ‘Starbucks’, ‘Summer On The Underground’, ‘Here We Go Again (I Love Lake Tahoe)’, ‘Nothing’ 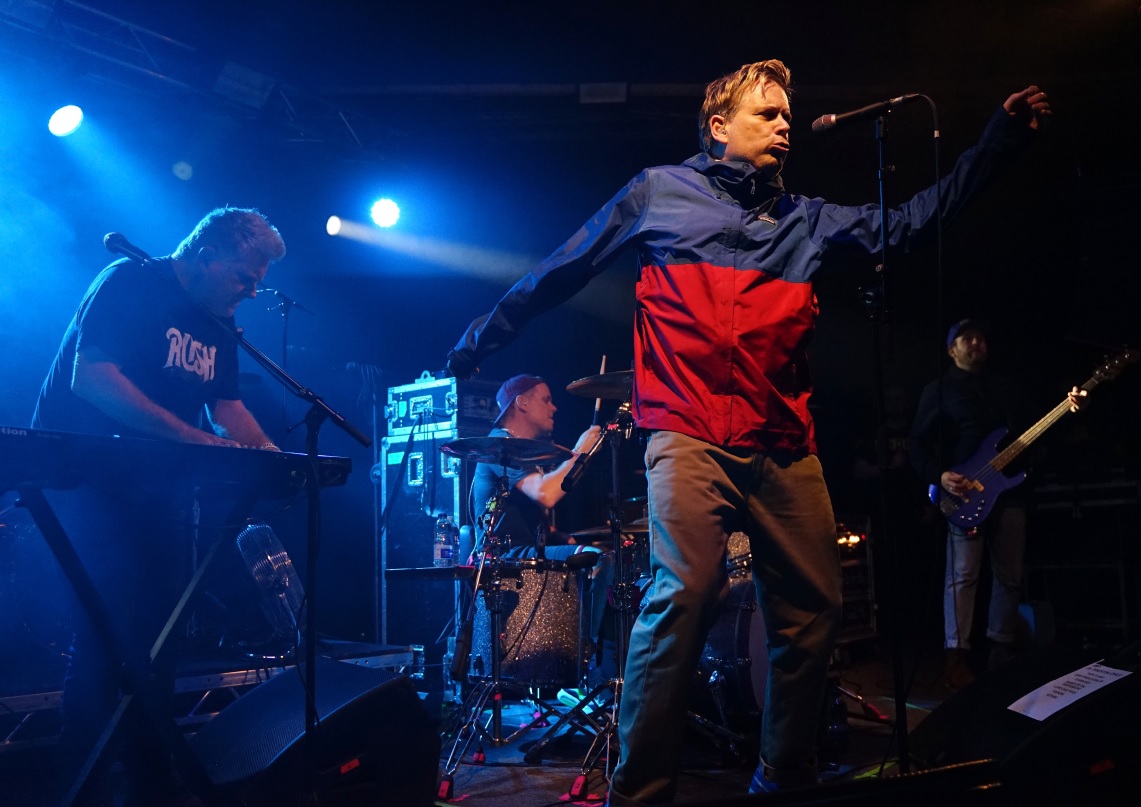 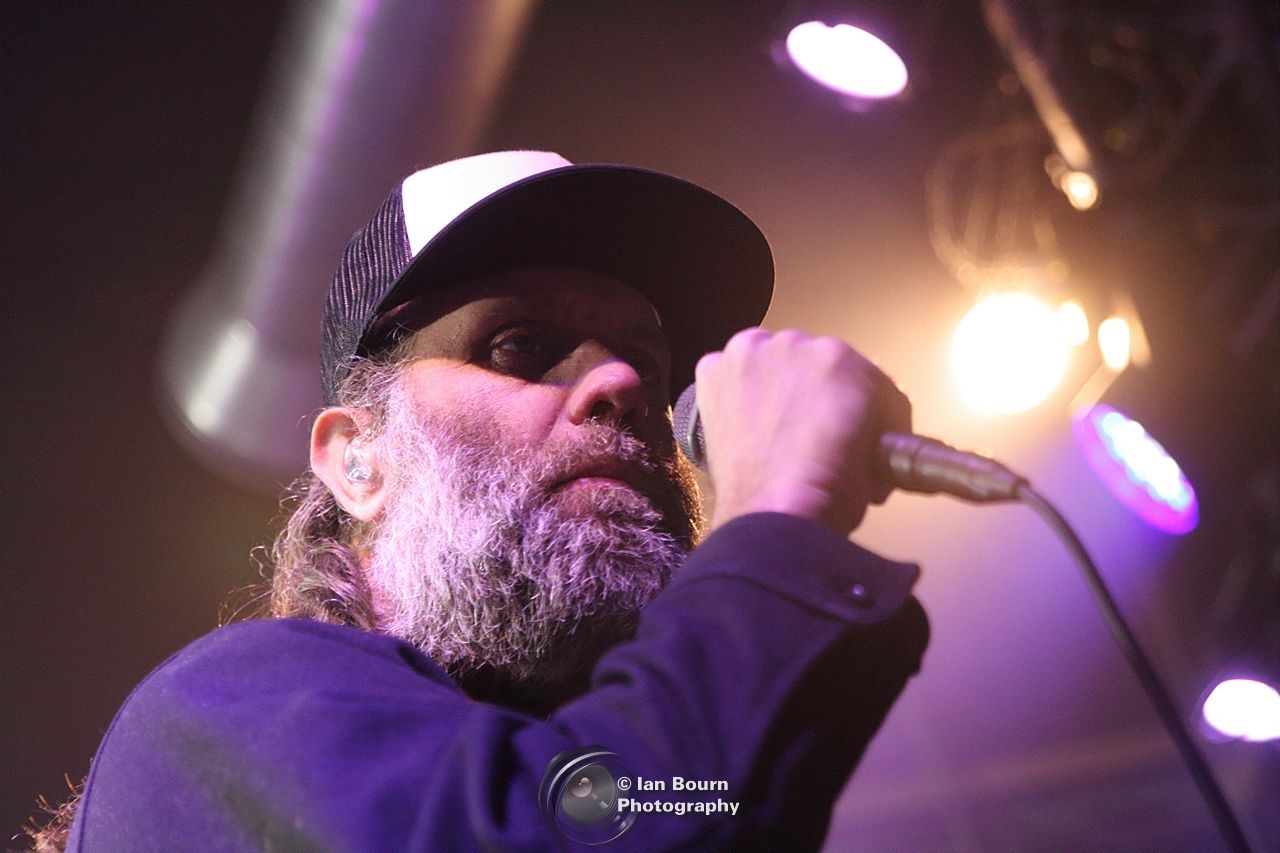 A sense of excitement and anticipation is building as the stage is prepped for the headline act, and the room suddenly seems very full. Reef come on to a loud cheer and some enthusiastic chanting of the band’s name. An insistent guitar riff ushers in the briskly motoring ‘Shoot Me Your Ace’, title track of the new album. 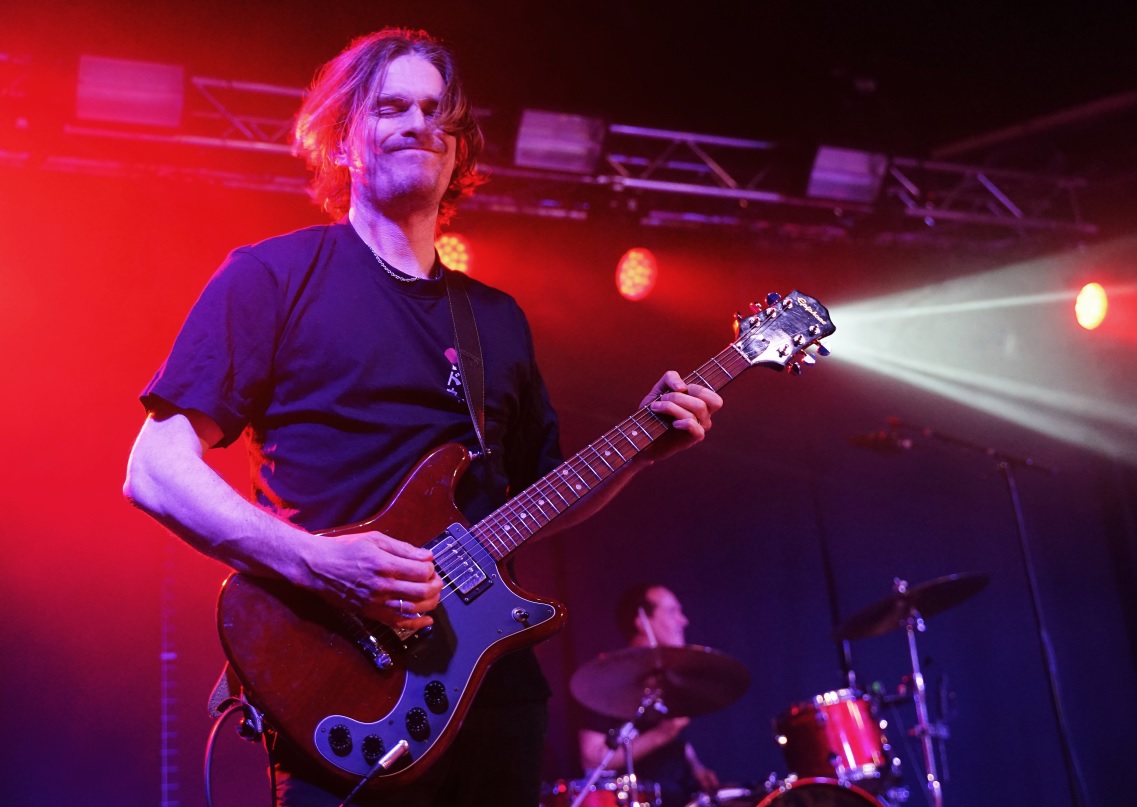 Clad in black, house left is Jesse Wood, son of Rolling Stone Ronnie in case you were wondering. Jesse took over from original guitarist Kenwyn House in 2014. His riffing is supplemented by another guitarist, Amy Newton, toting a Les Paul on the opposite side of the stage. On a central riser, Luke Bullen thunders around a red Premier kit. He’s also a recent recruit, original drummer Dominic Greensmith having left in 2018. Out front are the familiar figures of two stalwart founder members. Vocalist Gary Stringer sports a trucker’s cap and a bushy grey beard, and is animatedly engaging with the crowd. Bassist Jack Bessant was always a tall and angular figure, but his mature look is spectacular, with an enormous cascade of grey hair and beard. He looks like Charlton Heston’s depiction of Moses, if the Old Testament commandment bearer had decided to surf the Red Sea rather than have it parted to walk through. He is hunched over a low slung and particularly fancy Blast Cult custom bass in a sparkly green finish. Cool? This guy is ice cold. 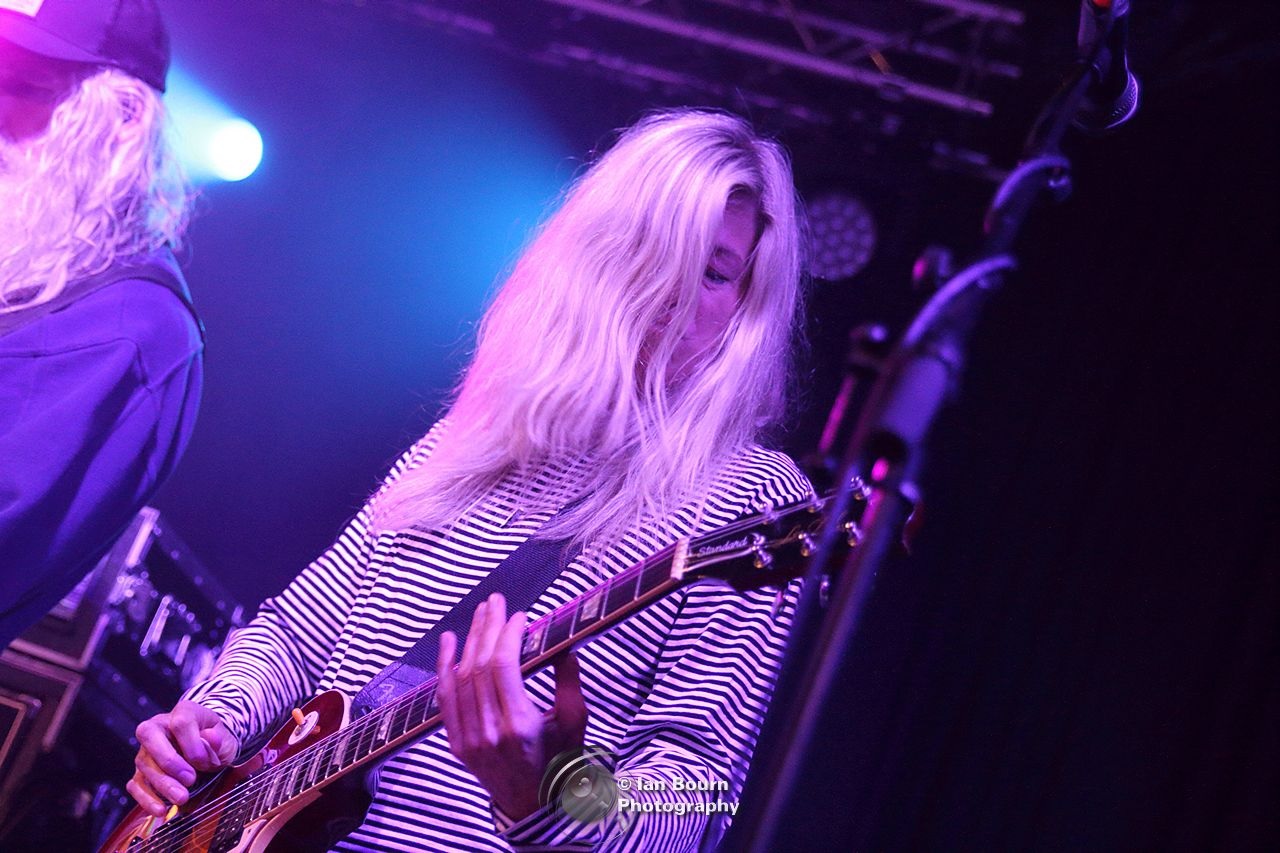 Luke is getting busy around the toms on ‘Stone For Your Love’, one of the numbers that made it onto the valedictory ‘Together’ compilation back in 2003, and there’s the familiar bouncing riff of that early single ‘Naked’. If I had a MiniDisc on me, I’d throw it out of the window. The more reflective ‘Consideration’ provides a change of pace, and we’re right up to date with ‘Right On’ from the new album, which is sounding good alongside the more familiar material. Guitarist Amy provides a high harmony vocal. 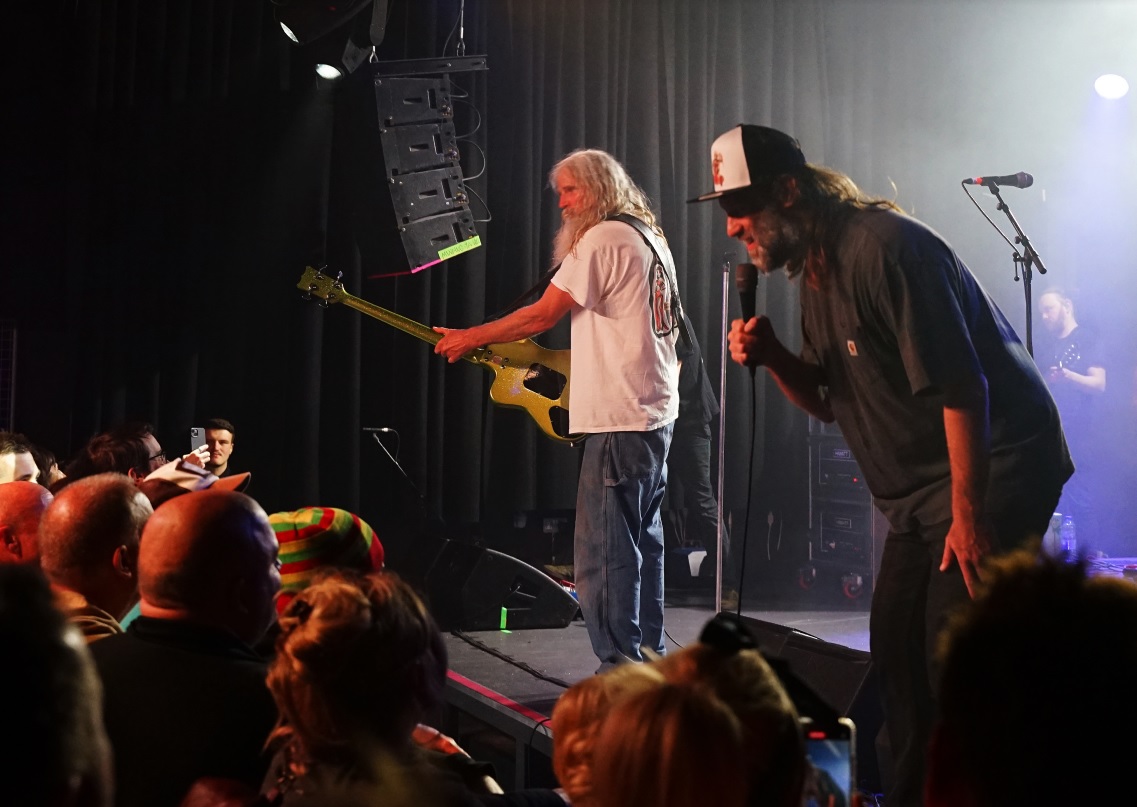 Big hit ‘Place Your Hands’ gets an enthusiastic reception from the crowd, the raucous mass singalong appropriately accompanied by a sea of waving hands. It looks really impressive. Everyone keeps clapping at the end as the house lights go up for Gary to snap a few photos of the crowd. 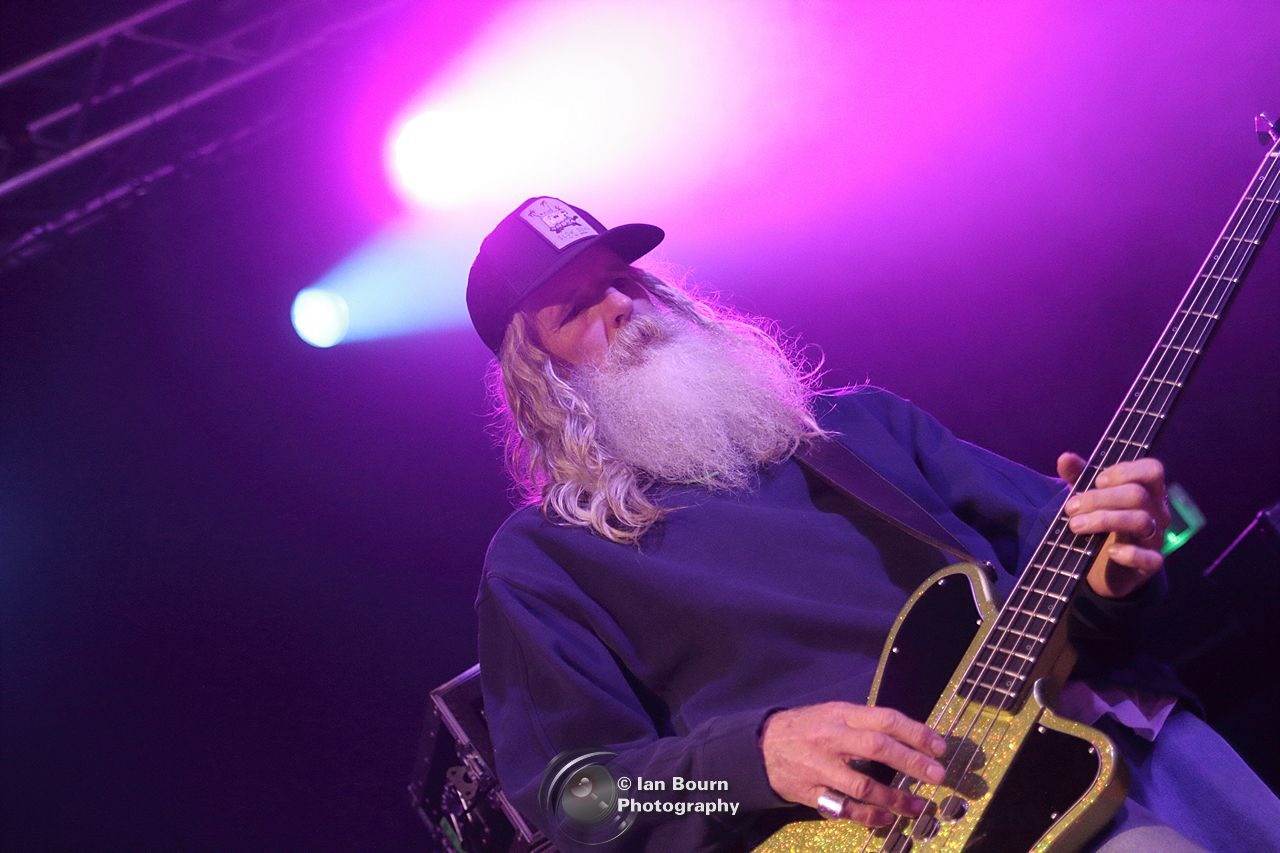 ‘Best Of Me’ is a particularly impressive track from the new album, and sounds like classic Reef. Gary’s mic is on a straight stand with a counterweight that returns it upright, Weeble-like, when the singer flings it away, and Jack is sweeping the neck of his bass above the front row. We get ‘New Bird’ from the sometimes overlooked ‘Rides’ album, and there’s soon a massive surge, bounce and chant underway as the familiar strains of ‘Come Back Brighter’ start up. Everyone is playing hard, with Gary putting some serious passion and intensity into his performance. 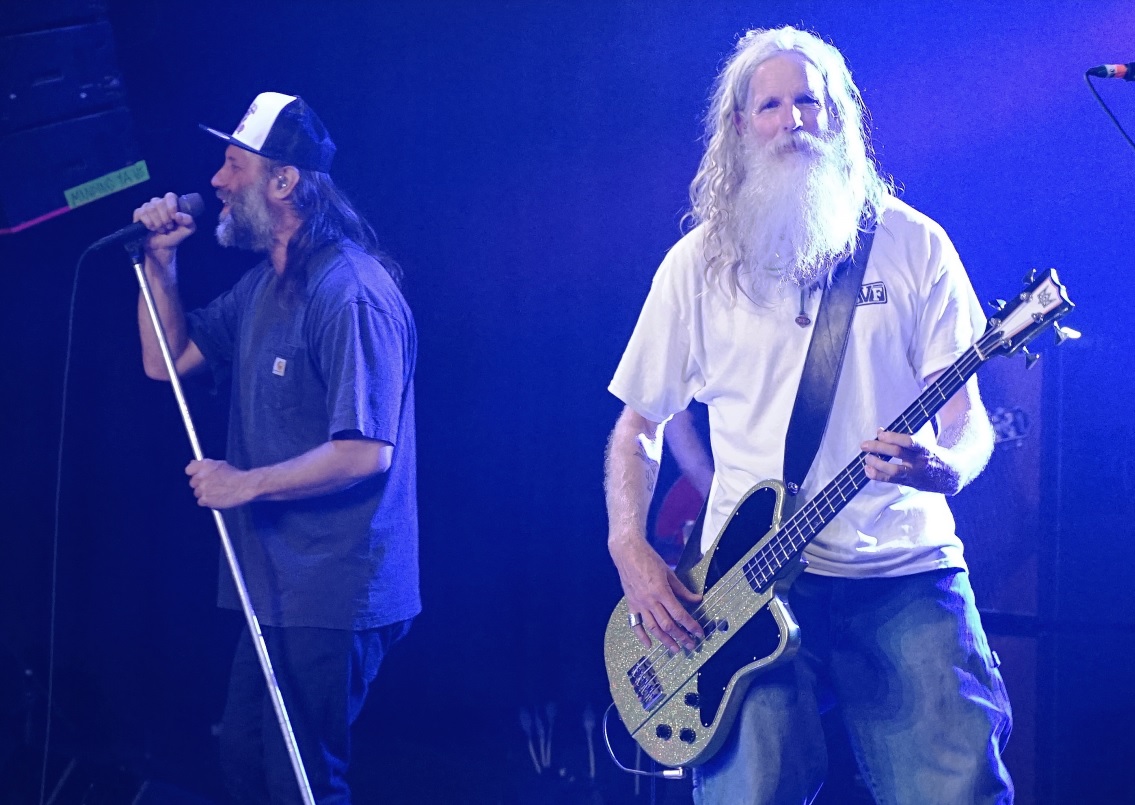 The tracks from ‘Glow’ tend to stand out, although the more recent ‘Precious Metal’ from ‘Revelation’ holds its own with a fantastically insistent riff. ‘Don’t You Like It’ inspires a full-on mosh with plenty of movement in the vertical and horizontal planes. 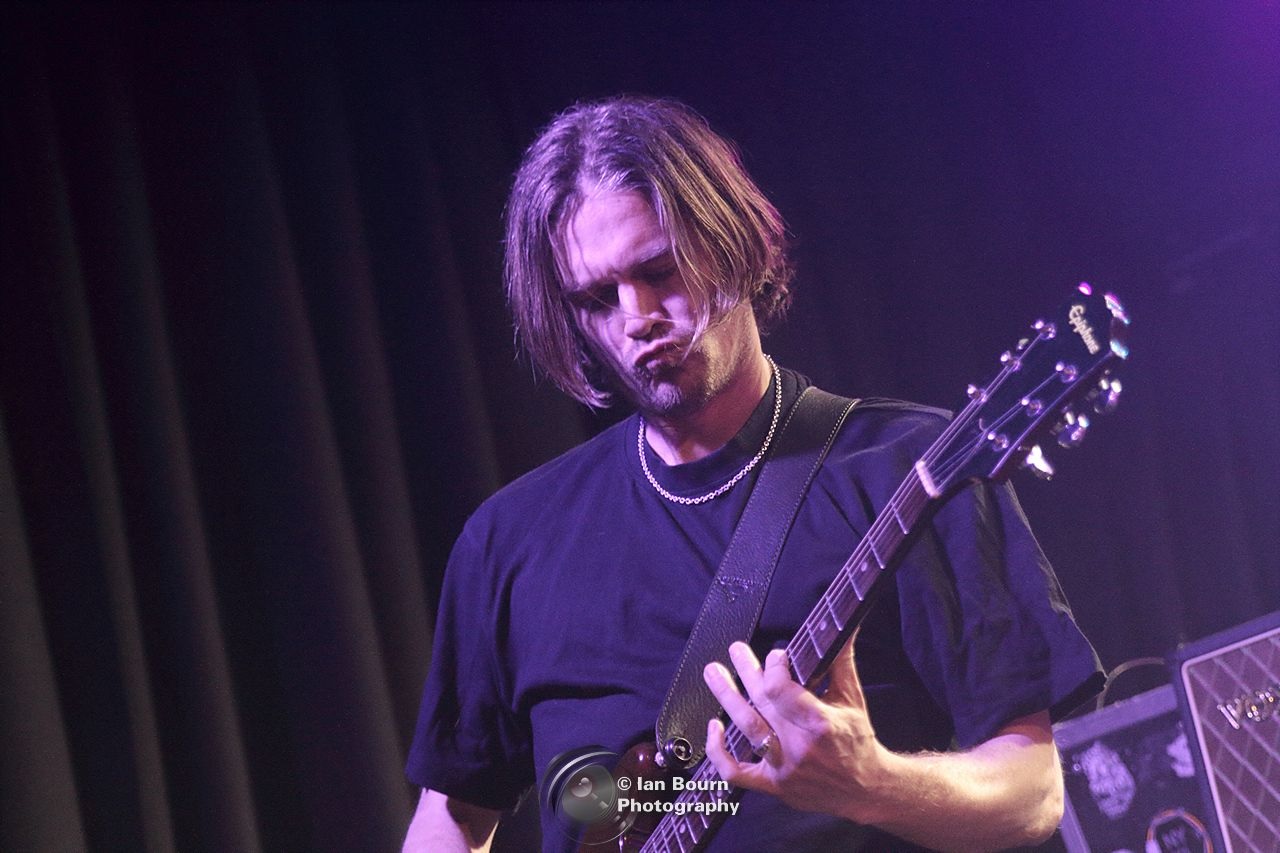 Gary introduces Jesse James Wood to the appreciative crowd, revealing that the guitarist has played on with a cut finger. Jesse’s guitar tech has been working hard too, with frequent changes of instrument. Epiphone seems to be favoured, with a cherry coloured Willshire and a semi-acoustic in a similar finish being handed back and forth. 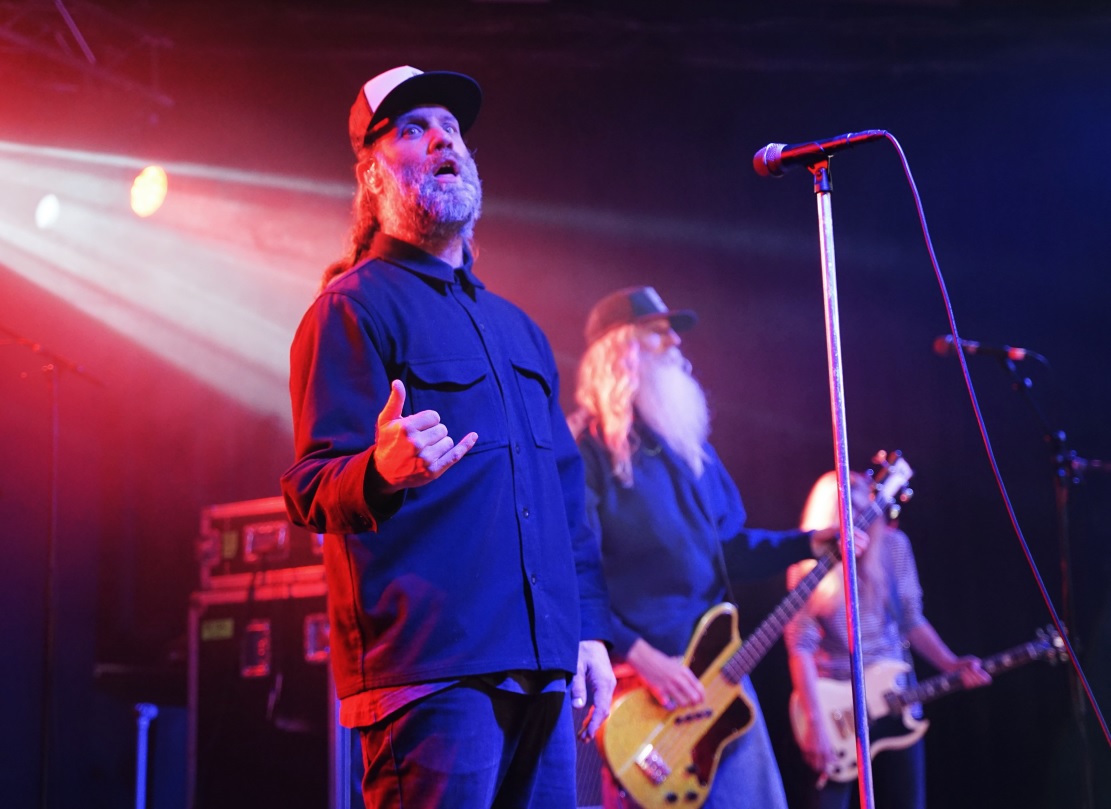 The main set finishes on a high note with the infectiously lolloping ‘Summer’s In Bloom’, and there is no doubt whatsoever that there will be encores. The first is a bit of a treat, a splendidly executed cover of Fleetwood Mac’s classic ‘The Chain’. Apparently Jack has been badgering Gary to play this for the last thirty years, and he certainly seems in his element during the famous bass-led breakdown, instantly familiar as the theme tune for TV coverage of Formula 1 motor racing. Equally familiar is the warm comforting guitar groove of ‘Good Feeling’ from the first album. Everyone here is having an absolute ball. “Alright, Brighton!” yells Gary, as a mass clap-along gets going. 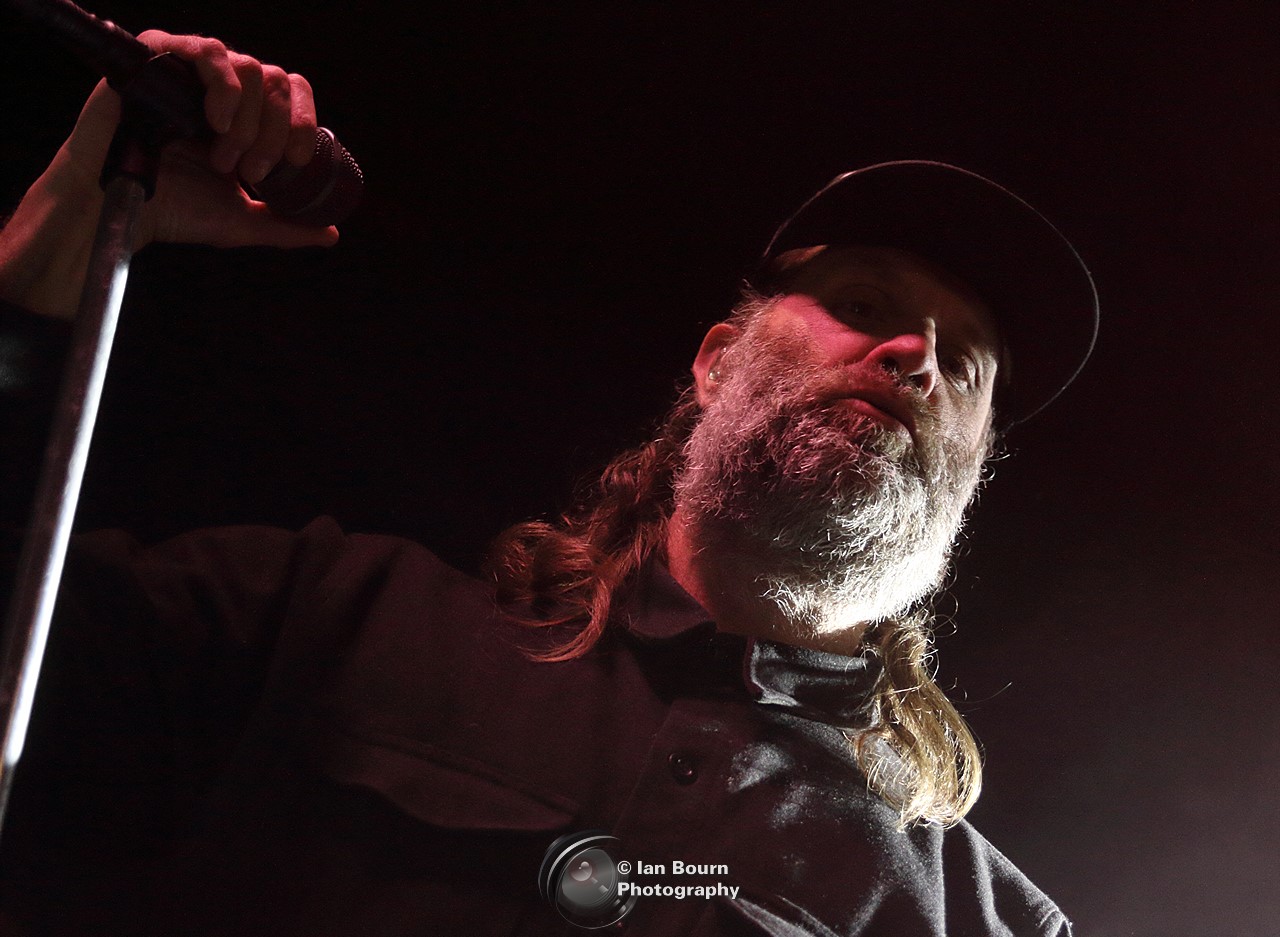 “Thank you old rockers and young rockers alike,” he quips, introducing ‘Yer Old’, which is the band’s ‘My Generation’ moment. The insistent beat provokes a roaring dance storm down near the front. My companion and I felt quite old going to see this band twenty-odd years ago, although the audience demographic seems broader now. Reef are as much fun as they ever were, and on the basis of the tracks I’ve heard tonight, their new album is going to be essential listening. 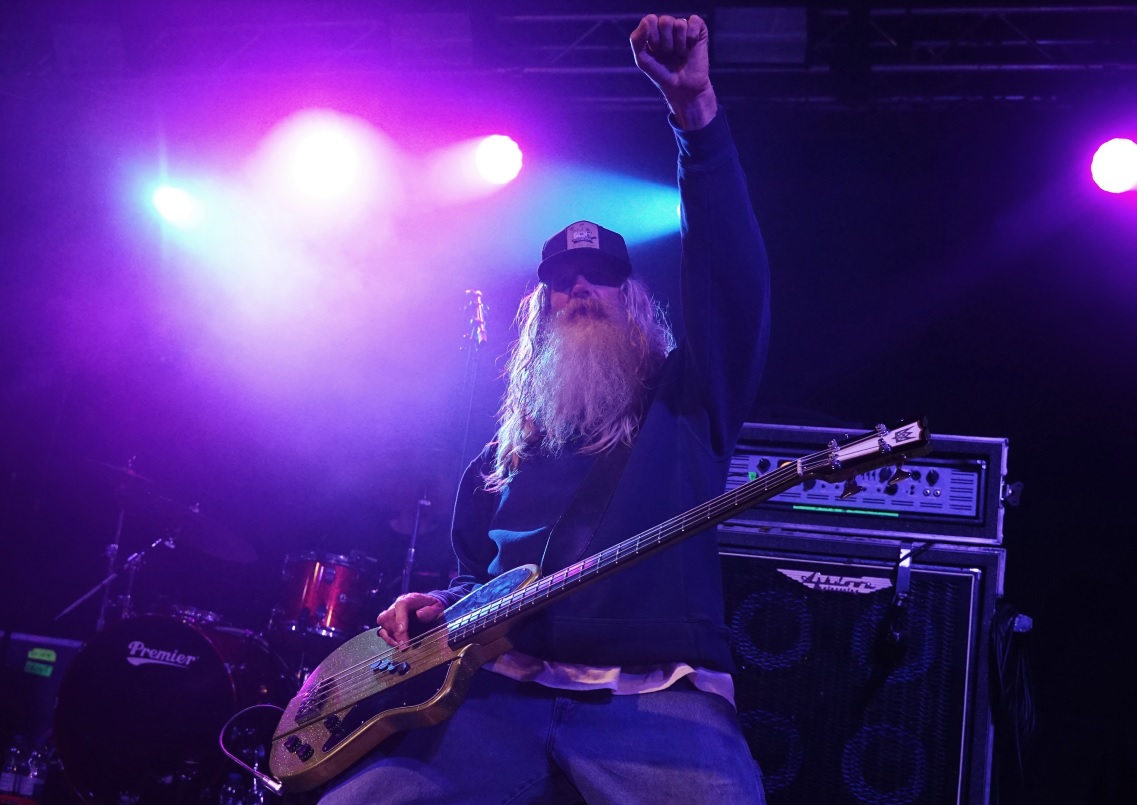 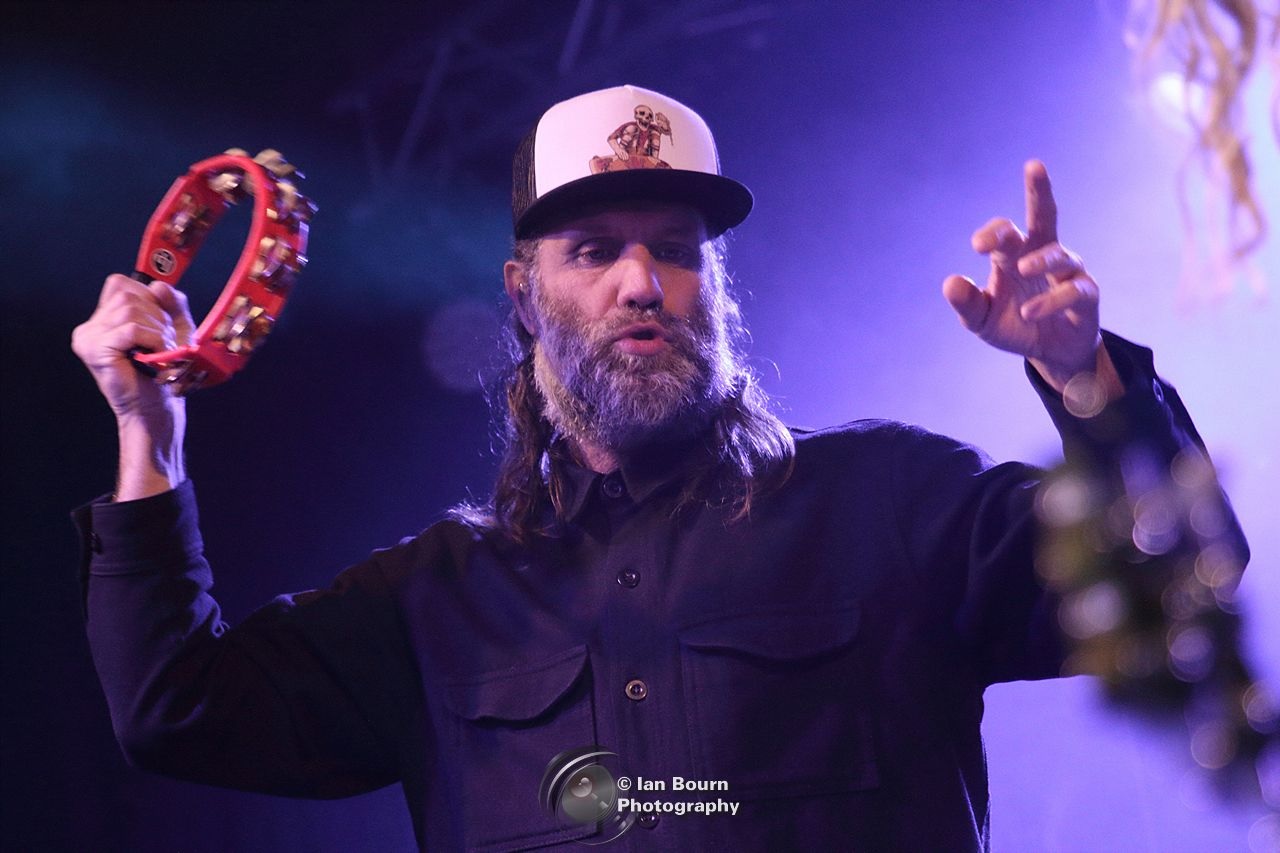 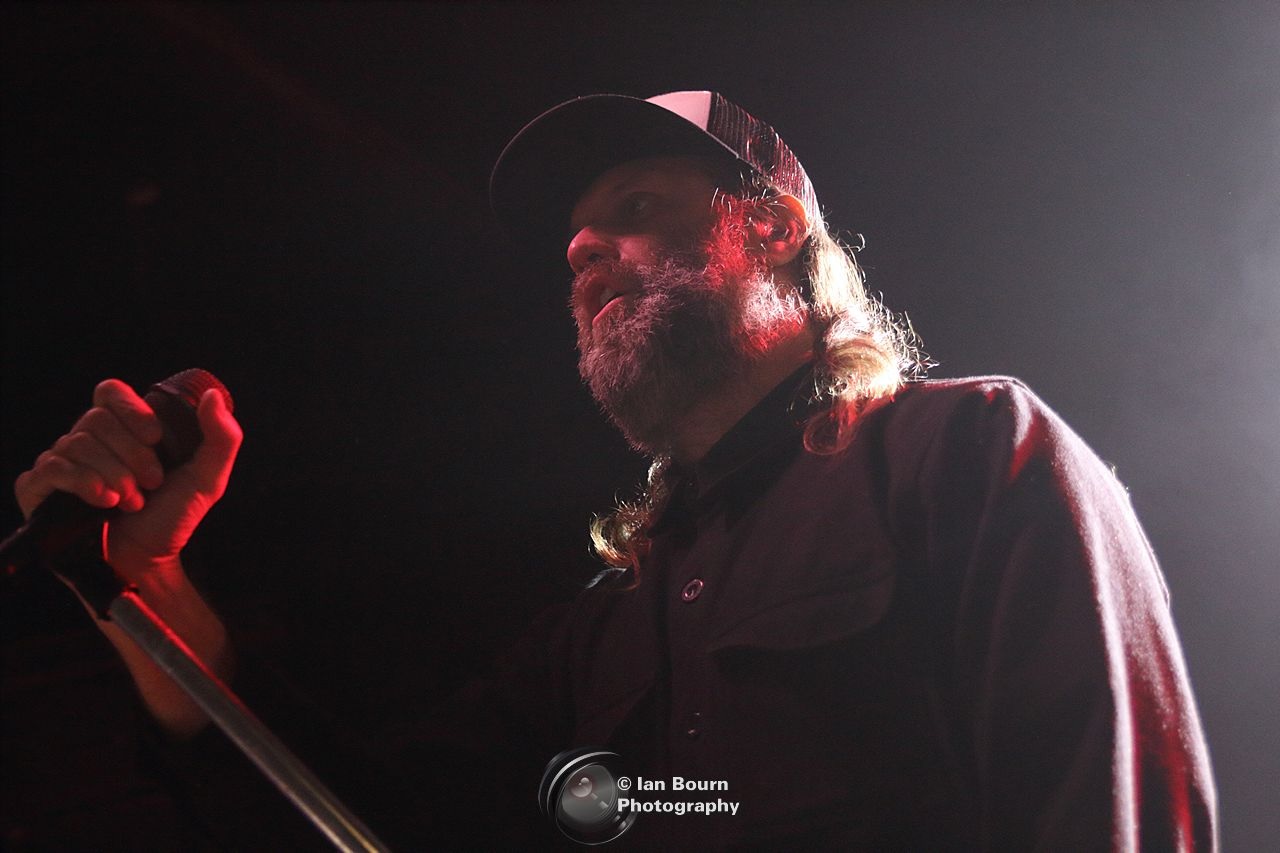 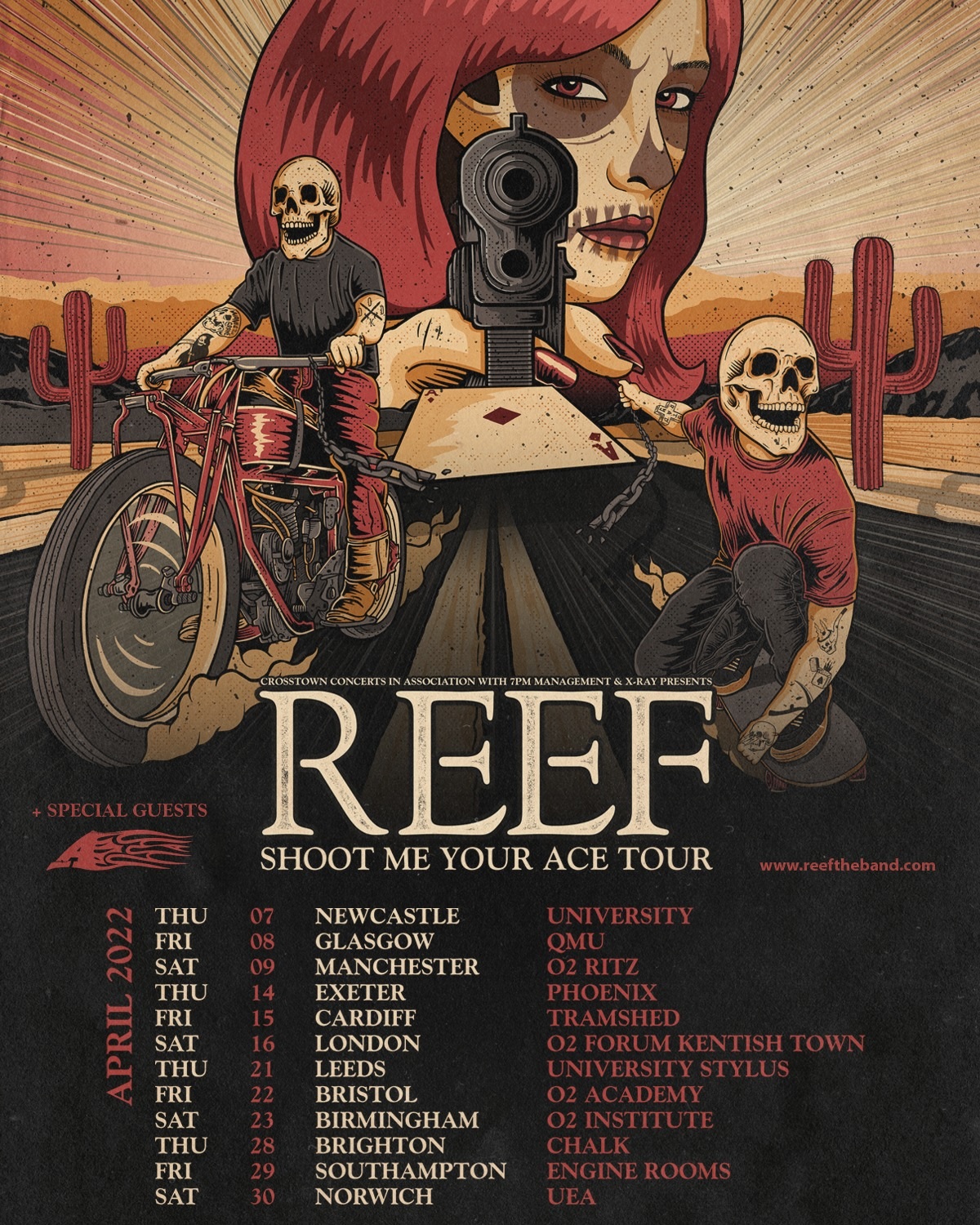 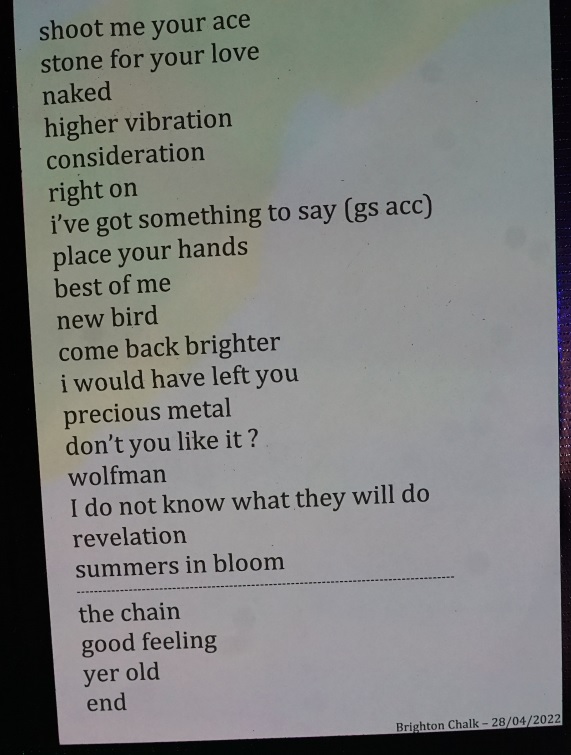 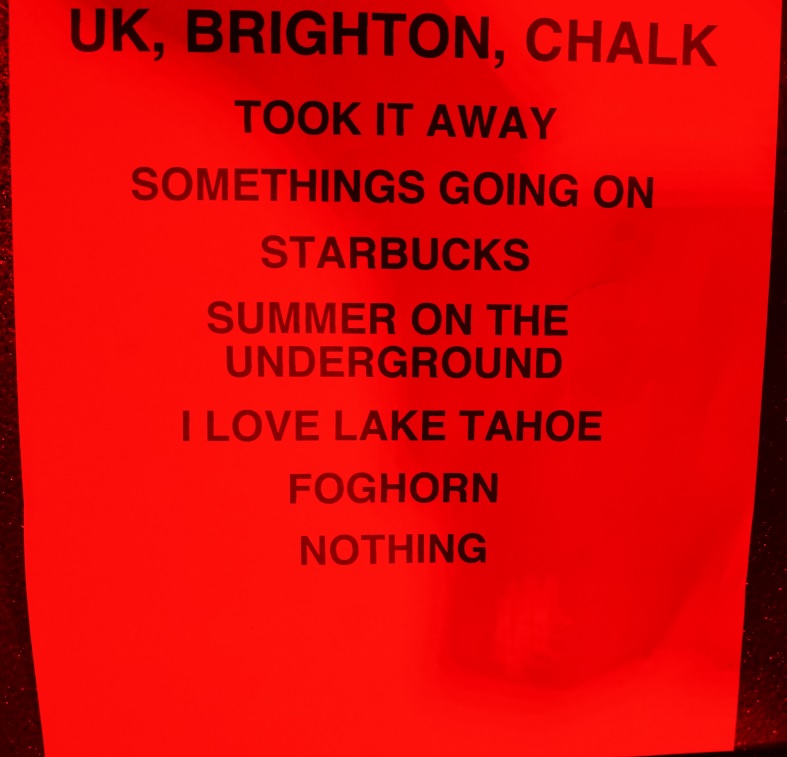