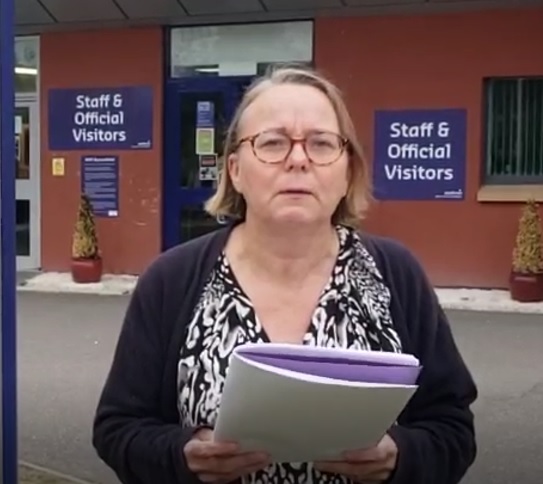 A Brighton climate campaigner who was jailed for spray painting Insulate Britain on the wall of a courthouse is appealing her sentence.

Venetia Carter, 58, was released from prison yesterday, but still wants to appeal her two-week prison sentence as a matter of principle.

She has now instructed solicitor Hollie Collinge, who has represented defendants in similar cases, to lodge an appeal at the crown court.

Carter said: “It’s a matter of principle. I feel that the sentence was inappropriate for what I did and it needs to be put on public record what the appropriate sentence for that kind of thing is.

“Prison was unexpected. The staff were very professional and I had no complaints about how I was treated whilst I was there.

“I hadn’t considered I would be sent to prison. I had work the next day and things I was in the middle of and I hadn’t thought to flag up to people that I might not be able to get there.”

Carter was jailed by district judge Amanda Kelly at Brighton Magistrates Court on 4 May.

Ms Kelly said spray painting the slogan was an attack not just on the courthouse, but the criminal justice system itself.

She said: “By graffitiing the place where the court sits, and posing for photographs that were then distributed so widely on social media and in the press, you were sticking two fingers up at the rule of law and the authority of the court.”

On her release from HMP Bronzefield, Carter recorded a video in which she defended her actions.

She said: “The cost of making good the damage I caused has been estimated at £150.

“The cost of putting me in prison must have been several times that. What a waste.

“It seems I was punished not just for the material damage, but for sticking two fingers up at the law, in the words of the magistrate.

“That was not my intention. But if the law fails to recognise the role of peaceful protest in shaping our society for the better, then it deserves to be called into question.

“If it turns a blind eye to climate emergency, then heaven help us all.”

Carter represented herself at last week’s hearing, where she pleaded guilty to criminal damage at Crawley Magistrates Court last month.

She had been attending court to support nine fellow activists who were appearing charged with causing a public nuisance by obstructing a motorway in September last year.

She said she used wash-off chalk spray, and that most of the slogan had been removed by the time she had finished talking to police that day.

Ms Collinge previously represented Charlie Turner, who goes by the name Bliss Winters, who was given a conditional discharge by Ms Kelly in March 2022 for spray painting anti-Israel slogans in red paint on a Brighton office block.