A Portslade firm was the primary contractor creating the “Tree of Trees” sculpture designed by Thomas Heatherwick and installed outside Buckingham Palace this week. 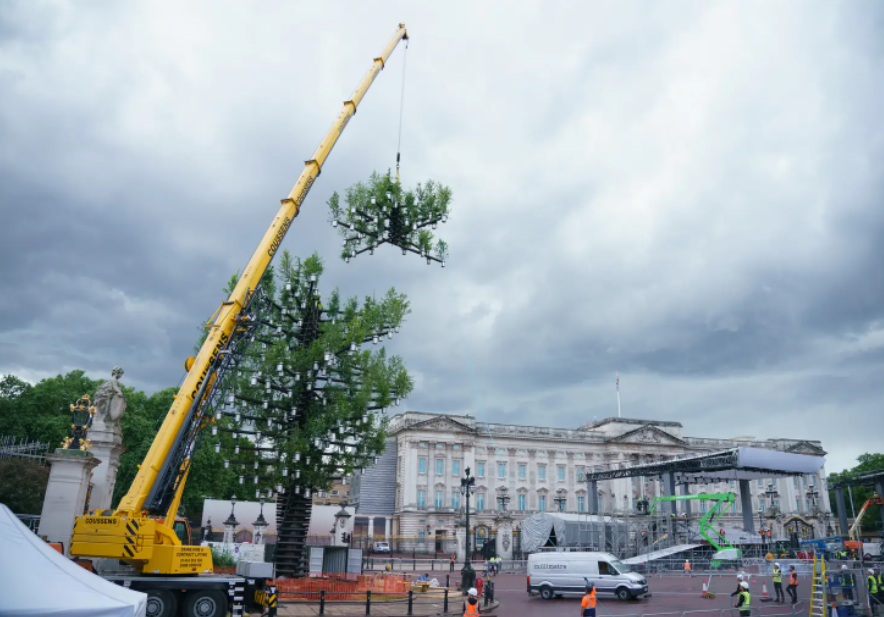 The firm, Millimetre, made and installed the 69ft (21-metre) sculpture, which includes 350 British-grown trees, as part of the Queen’s Platinum Jubilee celebrations.

The award-winning design and fabrication company, based in North Street, Portslade, said that it was delighted to be entrusted with the centrepiece for the Jubilee celebrations next weekend.

Millimetre said: “The sculpture reflects the joyful Jubilee tree planting which has swept the nation as part of the Queen’s Green Canopy, inspiring over a million trees to be planted during its first season, from October 2021 to March 2022.”

On Tuesday (24 May) junior foresters visited the Palace to help complete the creation by planting a batch of 6ft (1.8m) saplings in aluminium pots.

The pots were added to the repurposed steel branches and the youngsters also helped weave lights through the young trees of the structure which will serve as the principal beacon during the Jubilee commemorations.

Mr Heatherwick’s design is intended to reflect the planting of more than a million Jubilee trees as part of the Queen’s Green Canopy initiative to mark 70 years of the monarch’s reign.

He said that the Queen was a fan of the giant creation, which rises above her official residence, adding: “The Queen approved the plans. She gave a big thumbs-up.”

Mr Heatherwick said: “This sculpture acts like a beacon sending one simple, eternal message that trees are the superheroes of our towns and cities and matter much more to our lives than we realise.”

A team of hundreds of welders, arborists, engineers and fabricators worked on the project, which Mr Heatherwick said he designed in just a week.

He said: “We need re-reminding how much trees humanise the world around us and they can’t be taken for granted.

“The tree twists and spirals symbolically spraying an array of 350 baby trees towards their final homes across the country – a symbol of the much bigger initiative of planting.”

After the Jubilee weekend, the trees in their pots will be donated to selected community groups and individuals to celebrate their work and inspire the next generation of tree planters. 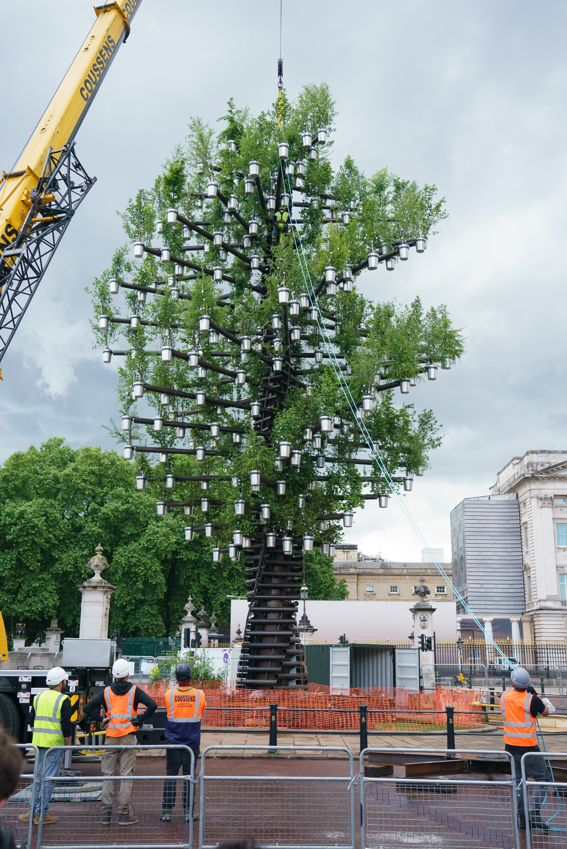 The Tree of Trees will be illuminated by a senior royal using the 3,500 lights in a night-time ceremony at the Palace on the first evening of the bank holiday weekend.

It is expected to be the focal point of a chain of 2,800 beacons being lit across the world in tribute to the Queen.

Sir Nicholas Bacon, chairman of the Queen’s Green Canopy, said: “The Tree of Trees offers a message of hope, regeneration and celebration to people and communities around the world.

“I am delighted in the way that everyone has come together across our nation to ‘Plant a tree for the Jubilee’.”