A Brighton man has been jailed for exploiting a vulnerable 16-year-old girl and manipulating her into drug dealing for him. 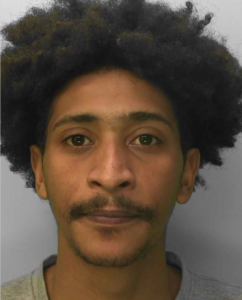 Sussex Police said: “Officers from Brighton’s Community Investigation Team observed a 16-year-old girl, who was being sought as a vulnerable missing person, drug dealing around St Mary’s Passage and Easter Road, in Brighton.

“The girl was seen to return to a hotel in Upper Rock Gardens, leading police to gain entry to one of the rooms to which she had returned.

“Inside was Giuseppe Carella, 26, formerly of Baker Street, in Brighton, who was arrested on suspicion of being concerned in the supply of class A drugs and trafficking a victim for exploitation under the Modern Slavery Act.

“A search of the hotel room found 128 wraps of class A drugs, over £1,600 in cash and items linked to the preparation of drugs such as scales, cling film and several mobile phones.

“Messages on the mobile phones identified Carella as the operator of the ‘Max’ county drugs line and revealed the 16-year-old victim had been working for him.

“Huge numbers of messages also showed a pattern of emotional manipulation from Carella towards his victim.

“He pleaded guilty to all of the drug and weapon offences in March 2021 and was remanded in custody awaiting the outcome of the exploitation investigation.

“After also pleading guilty to the charge of facilitating travel of another person with a view to exploitation, Carella was sentenced to a total of six years in prison at Lewes Crown Court on Friday (10 June).

“He was given a 10-year slavery and trafficking prevention order prohibiting him from owning a mobile phone, SIM card or computer unless registered with police and his service provider.

“He must also notify the nearest police station of any changes to his home address within seven days of moving house.

“Carella’s victim was supported in the community and is currently in the care of health services.”

Detective Constable Rachel Piggott said: “Not only did Giuseppe Carella manipulate and exploit a vulnerable girl to his own ends, he then tried to claim that he himself was a victim of modern slavery – an allegation that was investigated and disproved by Sussex Police.”

Detective Inspector Dee Wells, from Brighton and Hove’s Community Investigation Team, said: “I would like to thank all of the officers, staff and everybody involved in this long and complex investigation, which has safeguarded a vulnerable young person and taken a dangerous individual off the streets.

“The illegal drug trade goes hand in hand with exploitation and violence and we will continue to work around the clock to disrupt perpetrators, bring them to justice and safeguard their victims.”