A gang of girls who were filmed shoplifting at two stores – one in Hove – have been identified after a public appeal for information, Sussex Police said. 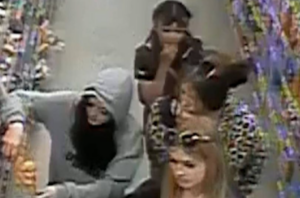 The force shared photographs and footage yesterday (Friday 5 August) and later the same day issued a follow up statement.

It said: “Following an appeal for information earlier this afternoon about thefts reported at shops in Hove and Goring, we have identified those we wish to speak to.

“Officers have thanked the public for their help to identify those involved.”

Four girls went into a Tesco store in Hove and stole croissants, lottery scratch cards and cigarettes worth hundreds of pounds.

They were filmed by security cameras as they went round the Tesco Express branch, in Denmark Villas, near Hove station, brazenly shoplifting.

Two of the girls went behind the counter to snatch age-restricted items such as lottery scratch cards and opened the cigarette store.