Plans to revamp a property in a shopping street in Hove were turned down after councillors criticised a proposal to bring back steps at the front.

The planning application was submitted to Brighton and Hove City Council by Annie and Janjan Ltd, run by Conservative councillor Robert Nemeth, 42, and Tristan Mills, 49.

But officials advised the council’s Planning Committee to refuse permission – and the committee voted nine to one against the scheme.

The plans proposed enlarging the first-floor flat at 10 Blatchington Road, Hove, and converting the basement into a studio flat.

But a report to the Planning Committee said that the shopfront would “cause significant harm to the character and appearance of the building and surrounding area”.

When the committee met on Wednesday (10 August), members were told that replacing the “level entrance” with steps at a commercial premises would “disadvantage” people with mobility issues.

The plans proposed raising the ground floor to its original height to create enough living space in the basement allow for a two-bedroom maisonette by extending the upper storeys.

Planning agent, Jon Puplett, of Whaleback Planning and Design, said that the building was a three-storey home with steps up to the front door until it was turned into commercial premises in the early 20th century.

He said that the conversion had led to a three-storey building becoming two storeys, with “wasted space” above and below the ground floor.

Mr Puplett, a former council planning official, said that, as the current business operated by appointment only, it would tell customers about the steps.

He said: “The proposed shopfront design is of a historic character and is almost identical to that which council has recently approved at 8 Blatchington Road, directly alongside.

“The resulting appearance in the street scene would be almost identical to the approved design but also be in keeping with the wider street scene which comprises a mixed building design where three storey buildings are interspersed with buildings with street-level commercial units.”

Councillor Nemeth is also behind the changes to 8 Blatchington Road next door, turning a former sex shop into a home. A beauty and massage business is based at number 10. 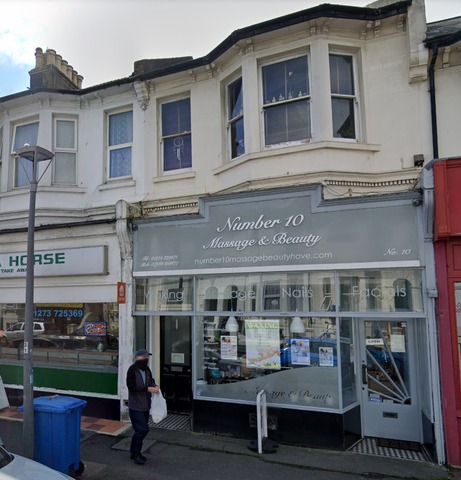 Independent councillor Tony Janio backed the recommendation by officials to refuse planning permission, having looked at properties along Blatchington Road.

He said: “The retail don’t have steps but the residential on the other side do. Surely in Planning Committee, we should be moving things forward, not going backwards.

“To suddenly reintroduce steps on a retail property … I think officers have done a good job in refusing this.”

Labour councillor Daniel Yates said that he would support plans to convert the building back to residential use but not if it prevented people with mobility issues from accessing a business.

He said: “Telling people who may have mobility issues around steps, once they make an appointment to go to a property, that they’re going to be unable to be seen because there’s no arrangements to get into that property, is unacceptable.

Conservative councillor Carol Theobald was the only committee member to vote for the scheme. She said: “It’s much better to have an attractive commercial unit still there. Otherwise, it would just be a wall of housing.

“Without those steps, I believe you can’t get a decent basement flat out of it. You need the steps to raise the height.”

The Planning Committee voted nine to one to refuse planning permission.