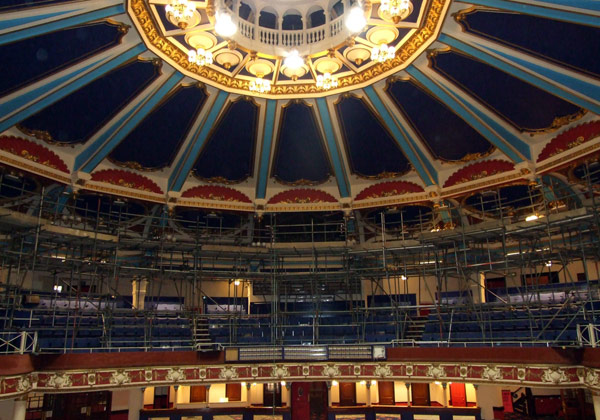 The owners of the Brighton Hippodrome have submitted a planning application for the restoration and renovation of the grade II* listed venue.

They said that their aim is “bringing the Hippodrome – the most at-risk theatre in the country – back to its former glory, as a multi-format live performance venue”.

The plans include creating a flexible performance space, restaurant and café, rooftop bar and terrace, an “apart-hotel”, serviced offices and shops.

The planning application, submitted to Brighton and Hove City Council, includes “part-demolition works and extensions” to the Victorian building, in Middle Street, Brighton.

It also includes a proposal to build a new six-storey apart-hotel, fronting Ship Street, and turning the old Hippodrome “fly tower” into offices.

The plans, submitted late last night month, propose turning Hippodrome House into a bar and members’ club, with an outside terrace. It would also contain some of the apart-hotel rooms.

The owners, the Lambor family, from Brighton, want to not only restore the derelict building but ensure that it can be placed on a financially sustainable footing.

The family has already spent a seven-figure sum stabilising the building, including making the roof watertight and dealing with rot. And the project to bring the building back to life is expected to cost many millions more.

A planning statement was submitted with the planning application. It was prepared by the ECE Planning consultancy for the Lambors, who own the Matsim group of property companies.

It said: “The Brighton Hippodrome, a grade II* listed building, has deteriorated into a state of disrepair since it was made vacant in 2006.

“The general neglect and lack of maintenance that have occurred during this period has led to the building being listed on Historic England’s ‘at risk’ register.

“The proposed development will represent significant investment into the building and an opportunity to arrest the current trend of degradation and enhance the significance of the building and its contribution to the wider Old Town Conservation Area.”

The planning statement added: “These uses have seen the building extended and altered in numerous ways, most notably in the addition and incorporation of Hippodrome House to the north of the original building.” 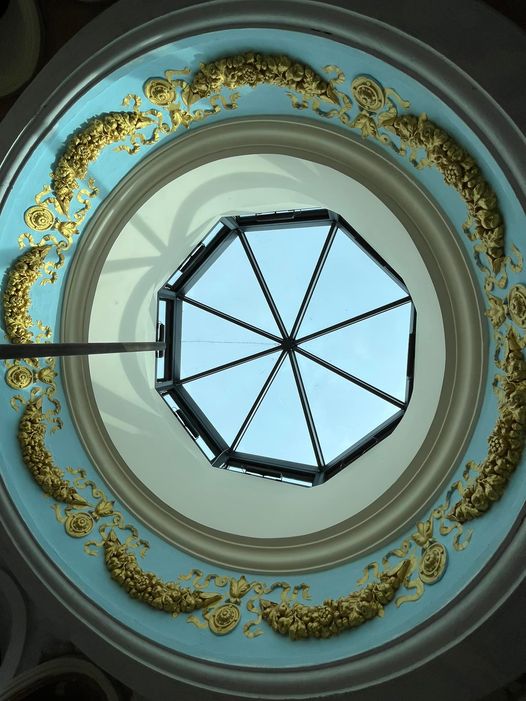 The recently restored occulus inside the Hippodrome in Brighton

At one point since it closed in 2006, there were plans to turn the venue into a night club and music venue.

And more recently, eight years ago, plans were approved to convert the landmark building into a cinema and food hall, create a mezzanine floor and demolish the fly tower.

The planning statement said: “The proposals represent the effective and efficient use of previously developed land to restore one of Brighton’s most valuable and iconic listed buildings, and one of the country’s most at risk theatres, and provide a landmark live entertainment venue and apart-hotel, all in a highly sustainable location.

“The proposed development will make a significant and valuable contribution towards … the hotel and leisure industry within Brighton and Hove.

“The proposals include the conversion and extension of the upper parts of Hippodrome House to create 16 self-contained apart hotel rooms.

“Also proposed is a new-build extension to the Hippodrome, with a dedicated entrance and sensitively designed frontage on to Ship Street, which will accommodate 62 apart-hotel rooms.

“Works to the upper volume of the Hippodrome fly tower will create approximately 850m2 of serviced offices and co-working space.” 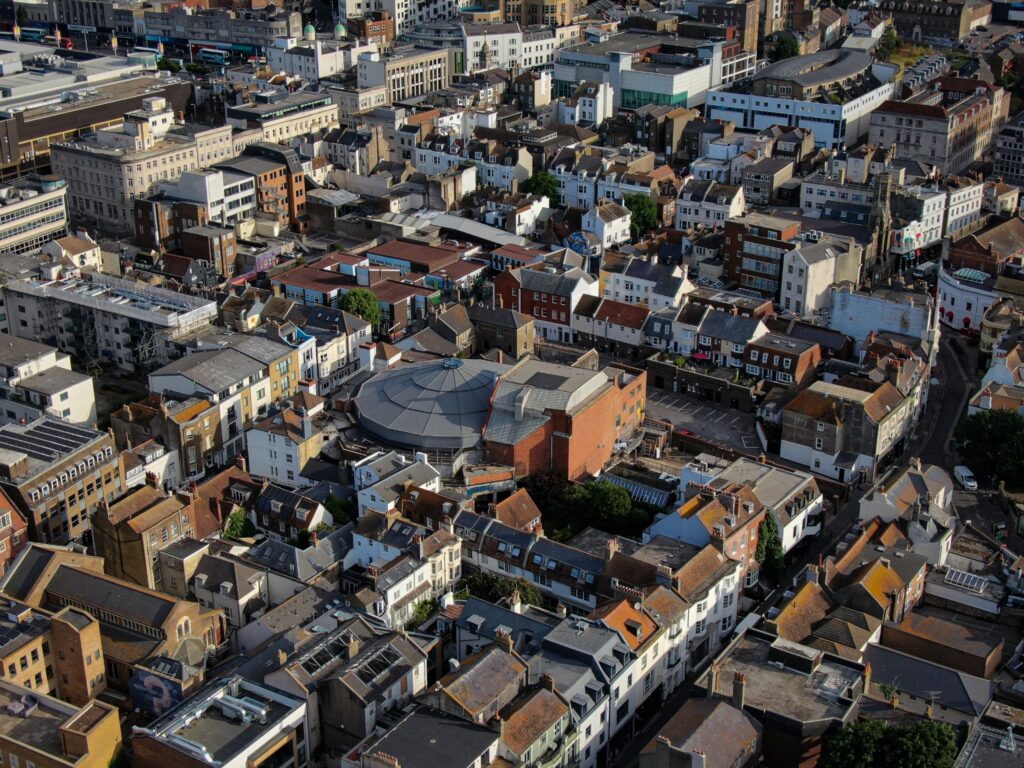 A drone was used to take this picture of the Brighton Hippodrome last month, looking towards the Clock Tower at the top centre of the shot

The planning statement said that its proposal would create a flexible events space and add rooms in an area identified by the council as the “core zone” for hotels.

The inclusion of shared offices and co-working space was also consistent with council planning policies, the company said.

The planning statement added: “Reinstating and ensuring the future sustainability of the theatre is and has always been at the heart of this redevelopment scheme.

“It will allow the theatre to revert back to the intended use of its heyday and enable it to cater for a variety of other modern-day uses such as live music, events, conferences and performances.

“This multi-use approach has informed other aspects of the scheme which enable the building and Hippodrome site as a whole to evolve in order to meet modern-day expectations.

“This includes the incorporation of 16 apart-hotel bedrooms within Hippodrome House and a further 62 new-build rooms within the Ship Street Apart-Hotel which will serve and help sustain the proposed event use of the theatre, helping to ensure its long-term retention and maintenance.”

The planning statement said that the scheme would future-proof a much-loved historic building, boost the surrounding area and return the venue, designed by Frank Matcham, to its glory days.