Hundreds of people have objected to plans for a 20-storey block of flats on the A259 seafront road in Hove. 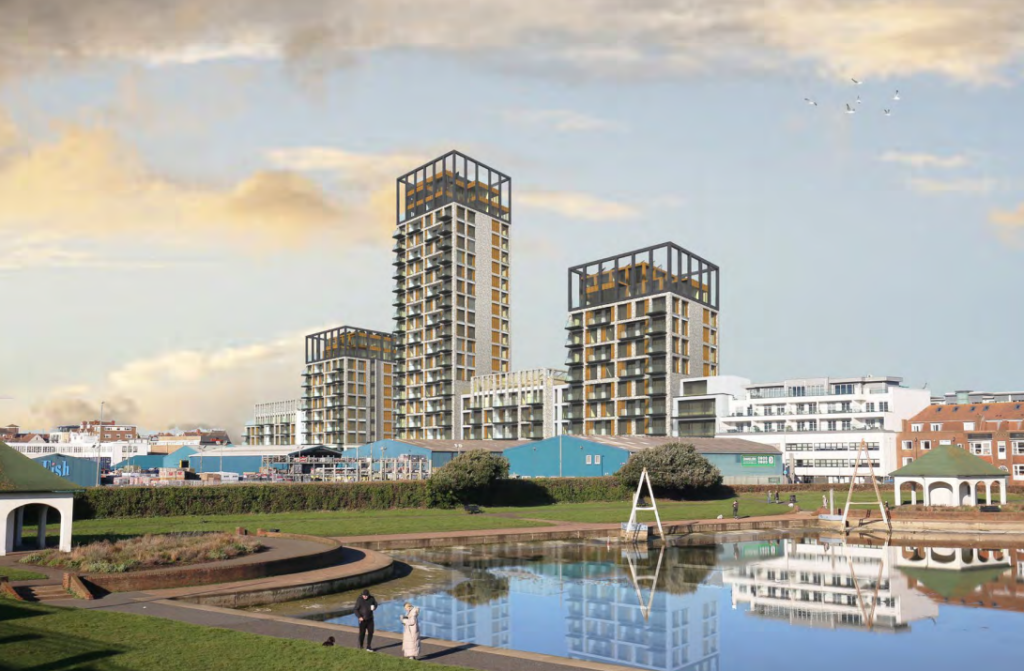 A community leader likened the £76 million scheme to the set from a “Godzilla” film while a civic society called it “massively aggressive”.

The tower block is one of three high-rise buildings forming part of a project to build commercial premises and 135 flats known as Aldrington Wharf.

A company called Synergy Developments has applied for planning permission to build the scheme between the A259 Kingsway and Basin Road North, at the eastern end of Shoreham Harbour.

In about two months almost 400 people have sent their objections to Brighton and Hove City Council, as has the Kingsway and West Hove Residents’ Association (KAWHRA).

The residents’ association organised a meeting this month and more than 100 people turned for the question and answer session with Synergy’s managing director Martin Knott.

KAWHRA chairman Peter Reeves said that the answers did not address people’s concerns, adding: “This proposal is unheralded, unexpected and unwelcome.

“The alien presence of a looming cage-topped shadow-casting skyscraper amid a near-continuous and oversized block of incongruously designed flats would better suit the set of a Godzilla movie.”

The association produced a list containing 58 reasons to object to the scheme which it said would do “serious harm” to the area of 1920s detached and semi-detached houses along tree-lined streets.

KAWHRA also said that the plans included no affordable housing, making the flats more likely to be used as second homes and holiday lets rather than as homes for locals and first-time buyers.

Mr Knott said: “We try to be open about the process we’re required to follow. We can’t please everyone.

“We’ve tried to accommodate comments and have modified the design as much as we can. What we’ve put forward, one person will like and one person won’t.”

The Brighton Society is among the objectors. It said that it was not against developing the area but the height of the buildings was “massively aggressive”.

The society said: “The development would result in a loss of light that would be both significant and harmful to living conditions for occupiers of neighbouring properties in Kingsway fronting the application site.

“The low winter sun would cast a large and long shadow over the houses and gardens. The visuals that show shadows produced by the towers are very poor and indeed misleading.”

The two Conservative councillors for Wish ward, which includes the Aldrington Wharf site, have written to those most likely to be affected by the scheme.

Councillor Robert Nemeth said: “Councillor Garry Peltzer Dunn and I have written to 4,000 residents about this scheme and will be doing so again shortly.

“Working closely with KAWHRA, we have been able to encourage nearly 400 residents to object.

“While some of the scheme’s features have been improved since the previous set of drawings were released, there is no way of getting away from the fact that the proposed structure is three times as tall as it should be.”

To see or comment on the planning application, visit the council’s website here and search for BH2022/02266.