Steve Hackett plays Brighton tonight as part of his tour to mark the fiftieth anniversary of the release of the ‘Foxtrot’ album by his former band Genesis. He is accompanied by a rather stellar band of musicians, comprising Roger King on keyboards (who has previously played with Gary Moore, and T’Pau amongst others), Jonas Reingold on bass (a session player as well as being a former member of The Flower Kings), Amanda Lehmann on guitar and vocals, Nad Sylvan on vocals, Rob Townsend on saxophone, flute and keyboards (who made his name as a session musician), and Craig Blundell on drums (who has played with Steven Wilson amongst many others). 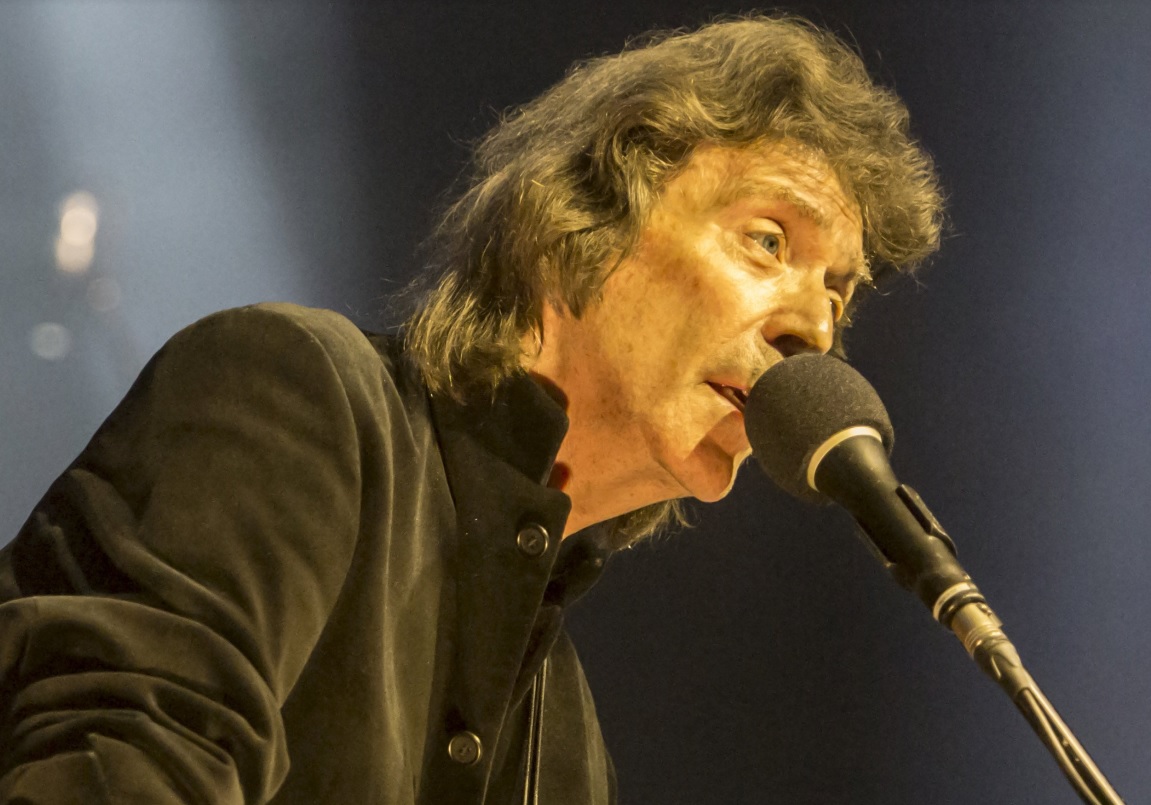 Tonight’s concert at the Brighton Centre is split into two sets. The first consisting of Steve’s solo work, and the second consisting of ‘Foxtrot’ by Genesis, plus a couple of extra songs. Proceedings commence with ‘Ace Of Wands’ from Steve’s first solo album ‘Voyage Of The Acolyte’, which was released in 1975, whilst Hackett was still a member of Genesis. It’s jazzier than I remember, but that may be as a result of live embellishments. Lest there should be any accusations that this is an unashamed exercise in nostalgia, the next song is ‘The Devil’s Cathedral’, which is from the album ‘Surrender Of Silence’, released in 2021. This song is a tale of unbridled greed, which unfortunately makes it sadly relevant to the early 2020s. Nad Sylvan joins us for the first time for this song. He is a marvellously un-showy singer. He is very much there to serve the song rather than any ego that he may have. He has a superbly expressive voice. Steve Hackett and Jonas Reingold swap solos. They almost get into duelling territory. 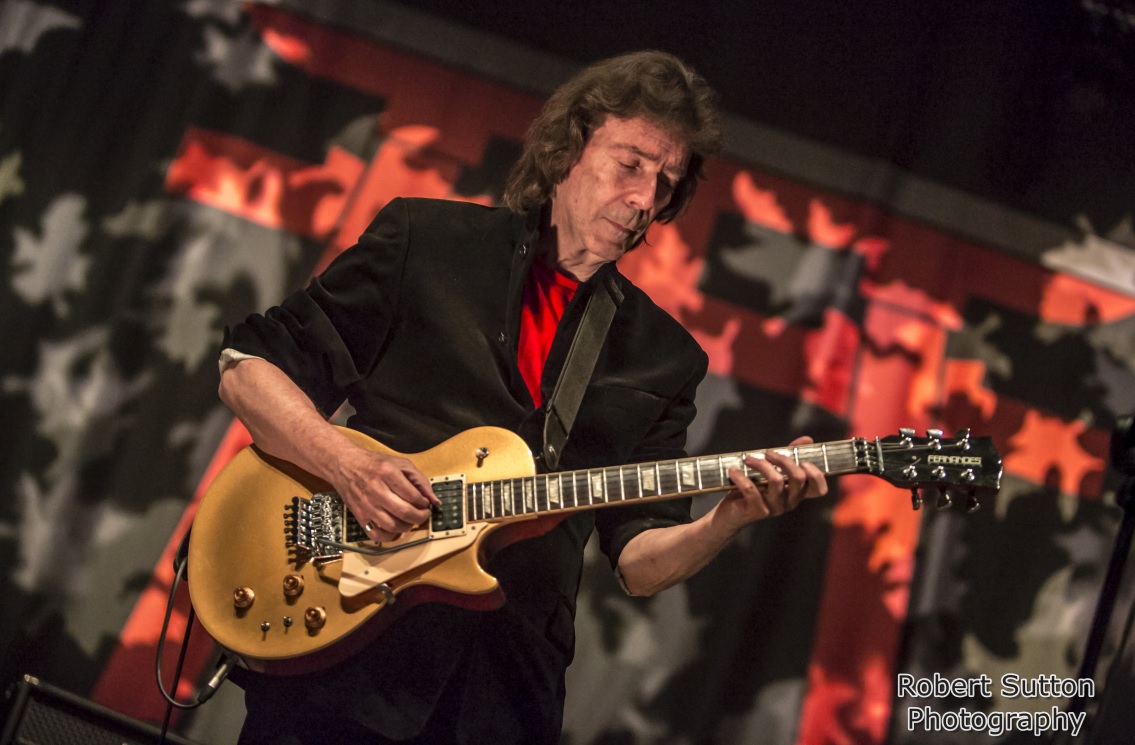 Amanda Lehmann joins us for ‘Spectral Mornings’, the title track of the 1979 album. Amanda executes a couple of impressive solos and at the end of the song Hackett says: “See! Girls can play too!” Well, we knew that Steve, but it doesn’t stop Amanda’s playing being any less spectacular. ‘Every Day’ from the same album features some utterly fabulous five-part harmonies. Having never seen Steve Hackett play live before I didn’t realise what an absolute guitar hero he is. Obviously I knew he was good, but his playing has a breadth which few others can match: from acoustic-style finger-picking to tapping. The man is a virtuoso. He also demonstrates the wide sonic vocabulary that technology gives to a Gibson Les Paul guitar today. 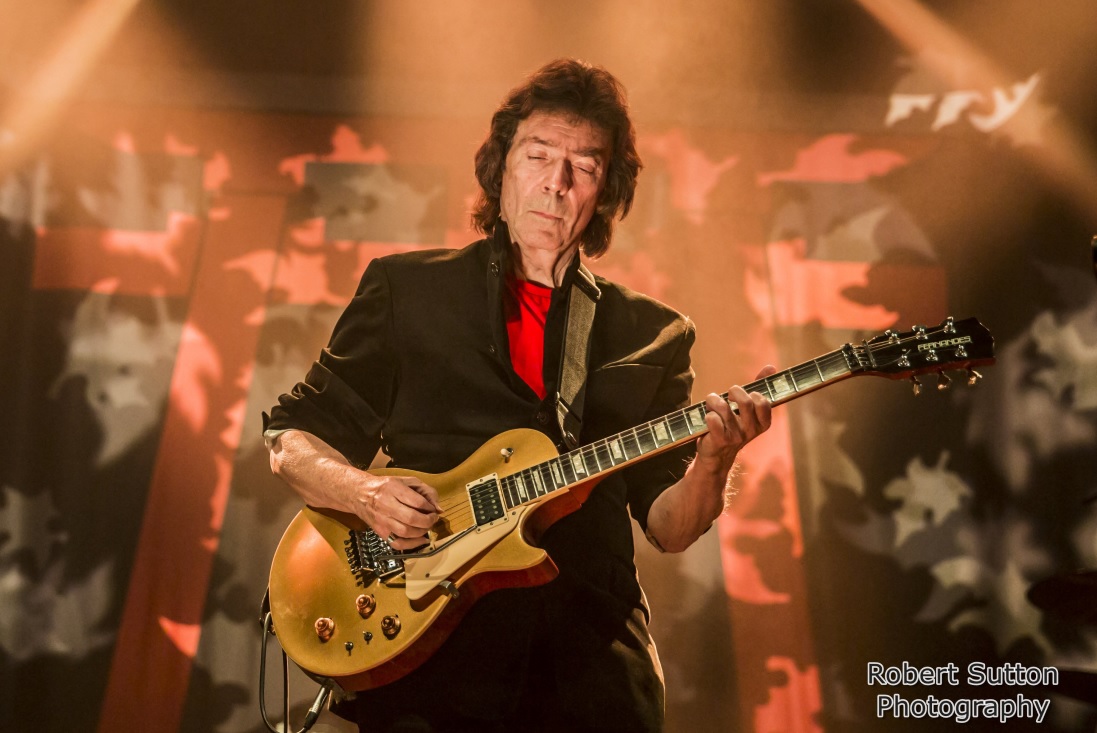 We return to ‘Voyage Of The Acolyte’ for ‘A Tower Struck Down’. The bass solo briefly quotes Jimi Hendrix’s ‘Purple Haze’, whilst Steve takes lead vocals. Steve also demonstrates his tapping technique, whilst Rob Townsend takes an absolutely incandescent sax solo, followed by a keyboard solo from Roger King. The musicianship of these players is utterly astounding. The final song of the first set is ‘The Shadow Of The Hierophant’, which is also from ‘Voyage Of The Acolyte’ and is a co-write with Genesis bandmate Mike Rutherford. A Hierophant incidentally, is the masculine equivalent of the High Priestess in Tarot cards. Not a lot of people know that. Amanda Lehmann takes lead vocals tonight, and the song is an absolute epic. This is a fantastic closing song for the first set, and we still have ‘Foxtrot’ to come! Hurrah!!! 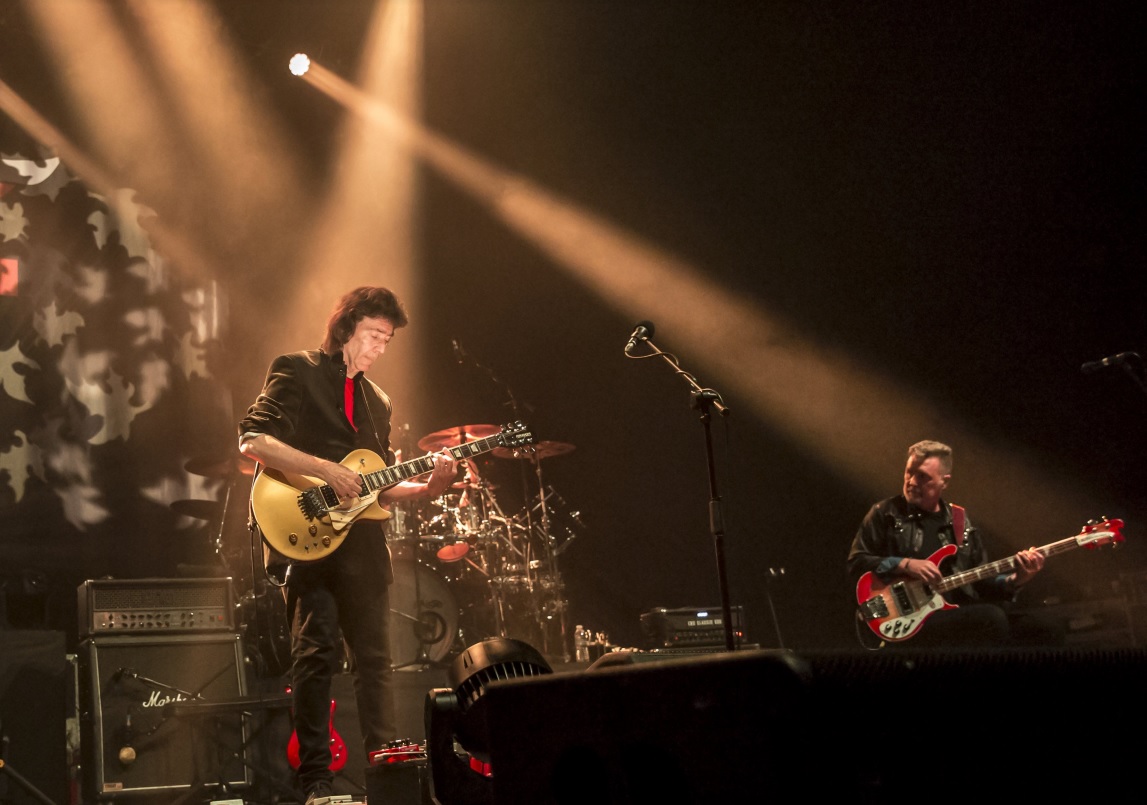 Listening to ‘Foxtrot’ today, and hearing how quaintly English it sounds, it’s easy to forget how advanced the album was considered to be at the time of its release. It was a very complex feat of composition, and the musicianship displayed was astonishing at the time, and indeed still is. As per the record, tonight’s rendition of ‘Foxtrot’ commences with ‘Watcher Of The Skies’, which rocks particularly hard, but not enough to reduce it’s faithfulness to the original. Nad Sylvan stands in the middle of the stage, towards the back, at the same level as the drums and keyboards. This makes him look preternaturally tall. Additionally he is backlit, so only visible in silhouette, which together with the red electronic glasses that he holds up to his eyes, give him a somewhat supernatural air. 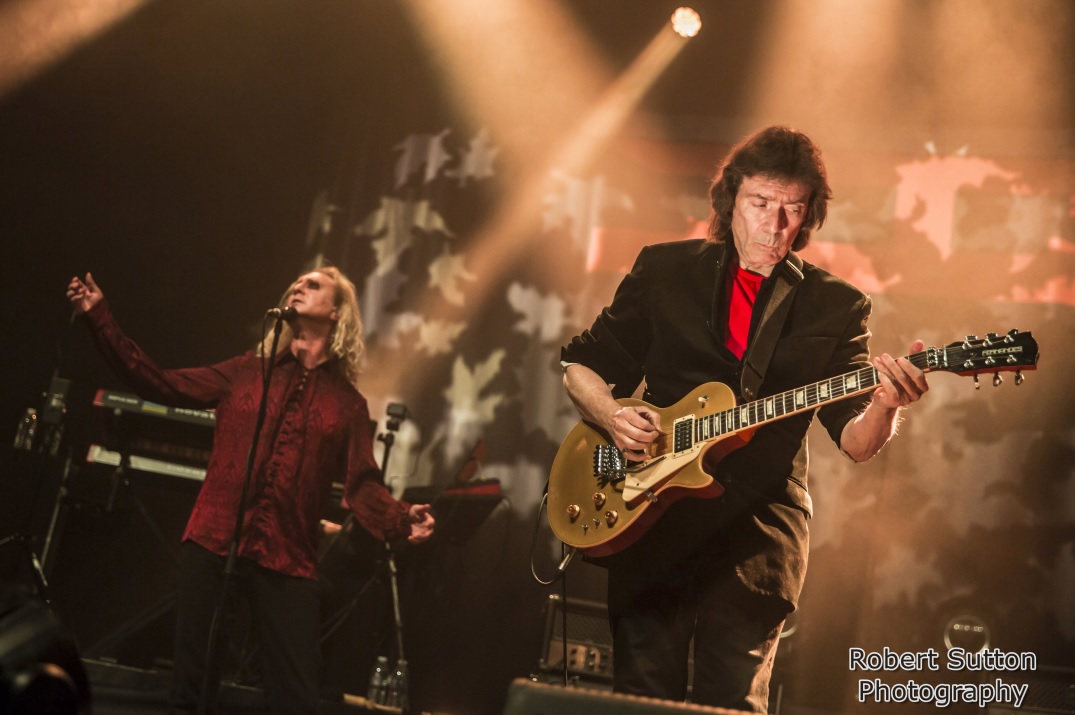 Of course, wonderful though the likes of ‘Watcher Of The Skies’ and ‘Get ‘Em Out By Friday’ are, the highlight of the ‘Foxtrot’ album, and indeed tonight’s show, is ‘Supper’s Ready’, which together with the introductory ‘Horizons’ instrumental piece, takes up all of side 2 on the original vinyl version. I’d seen Genesis play ‘Supper’s Ready’ at Deeside Leisure Centre in 1982, marking the tenth anniversary of its release. I certainly didn’t imagine I’d be seeing it performed again by one of the original members of Genesis forty years later! 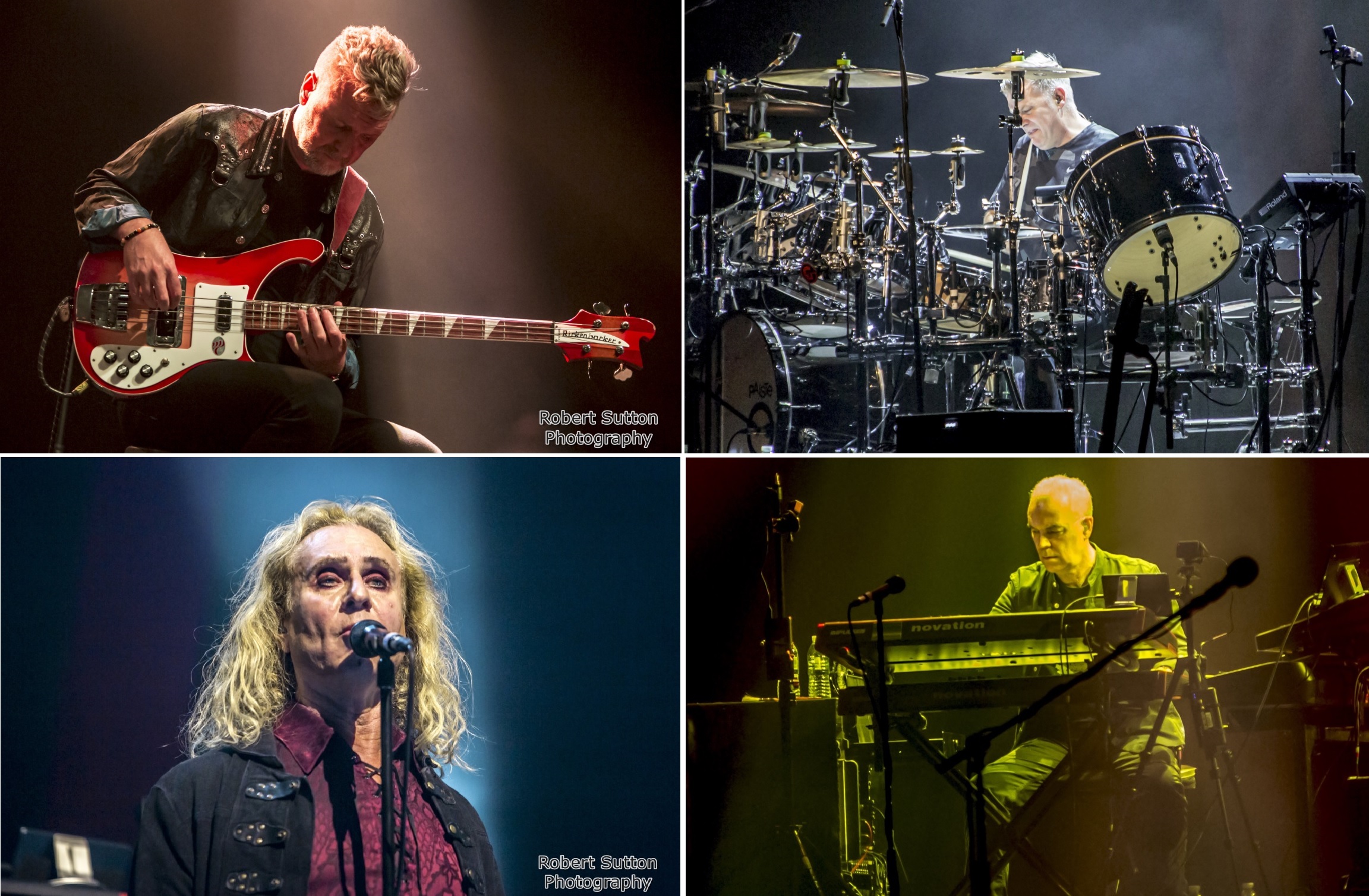 Steve Hackett plays a lovely acoustic guitar solo before launching into ‘Horizons’ proper. I’m pretty sure that this is the only time all evening that Steve Hackett has abandoned his trusty Les Paul. ‘Supper’s Ready’ is actually a song suite, comprising varying musical styles. None of the various parts of the suite are lacking in any way, but definite highlights, both live tonight and on record, are ‘The Guaranteed Eternal Sanctuary Man’, ‘Willow Farm’, ‘Apocalypse In 9/8 Co-Starring The Delicious Talents of Gabble Ratchet)’ and ‘As Sure As Eggs Is Eggs (Aching Men’s Feet)’. Tonight’s performance of ‘Foxtrot’ has been very faithful to the original, even down to the fade-out at the end of ‘Supper’s Ready’. It has also been an undeniable triumph, recognised by the thunderous applause at the song’s end. 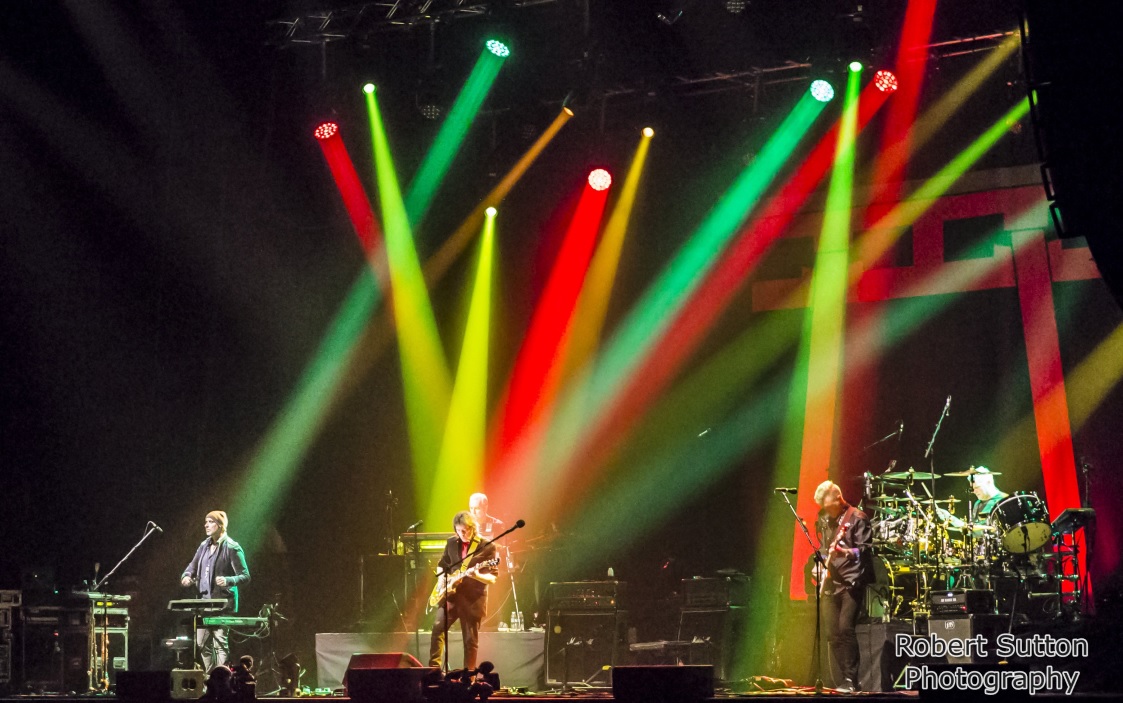 The band leave the stage, and the question is of course how can they follow that? Indeed, can they? Of course they can, with ‘Firth Of Fifth’ from ‘Selling England By The Pound’, released in 1973. This is followed by a drum solo. Now, I’m not a great fan of drum solos, but if anyone can come up with a drum solo that’s interesting and entertaining, then surely Craig Blundell can, and he does! This leads into a version of ‘Los Endos’, from ‘Trick Of The Tail’ (1975), which includes some instrumental parts from ‘Squonk’ (from the same album). Tonight’s show has been an absolute feast of prog. Superb music played by an excellent band. I hope you tour again soon Mr Hackett. Perhaps ‘Selling England By The Pound’ next year? 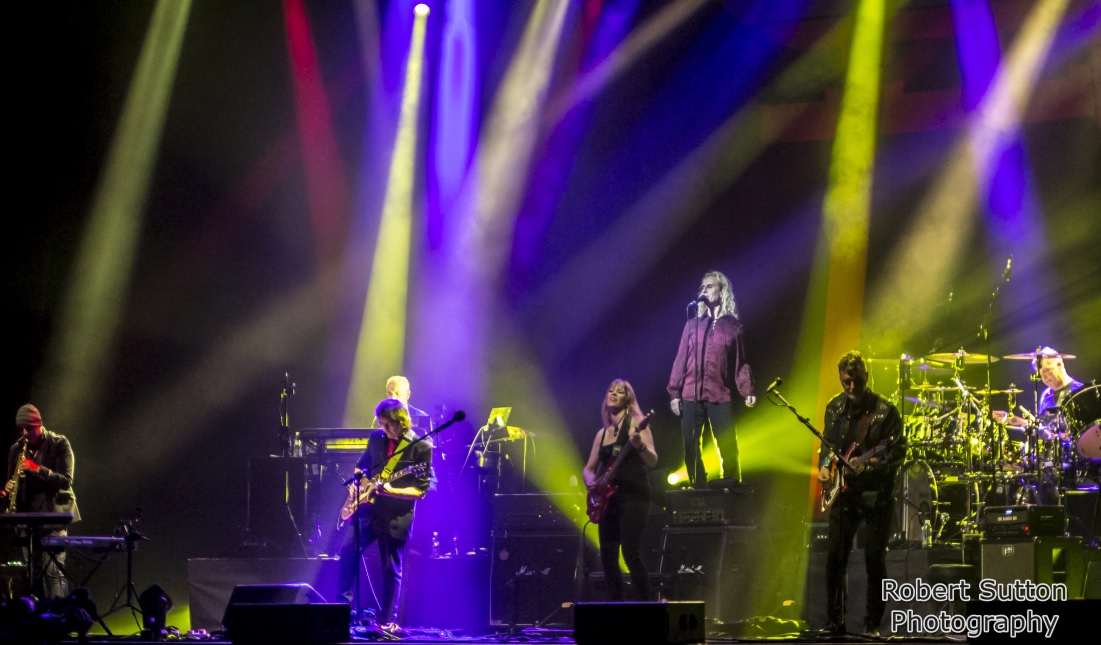 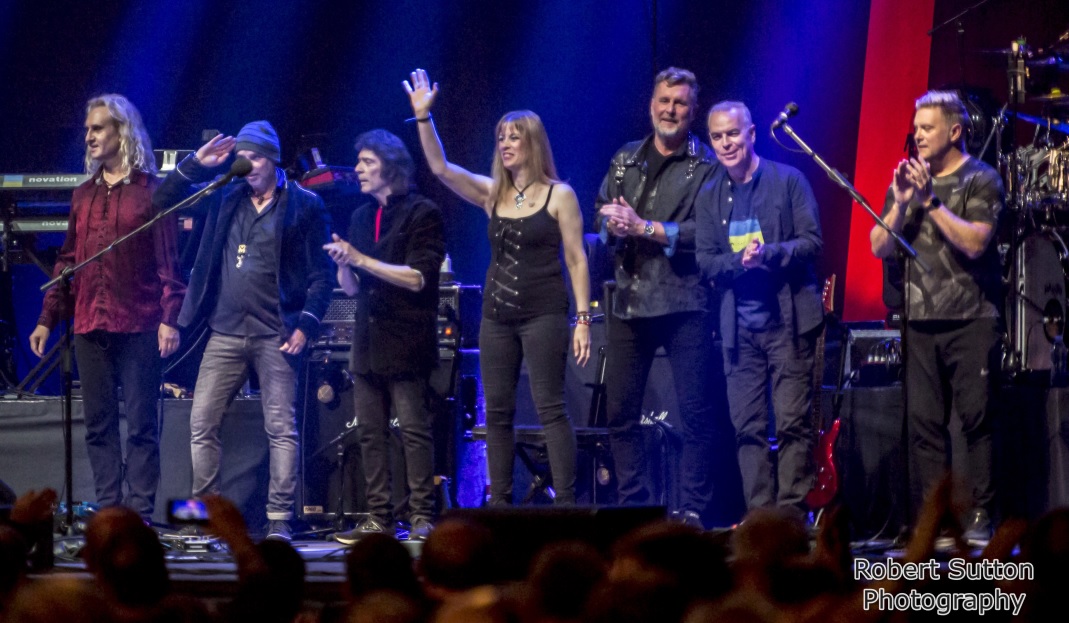 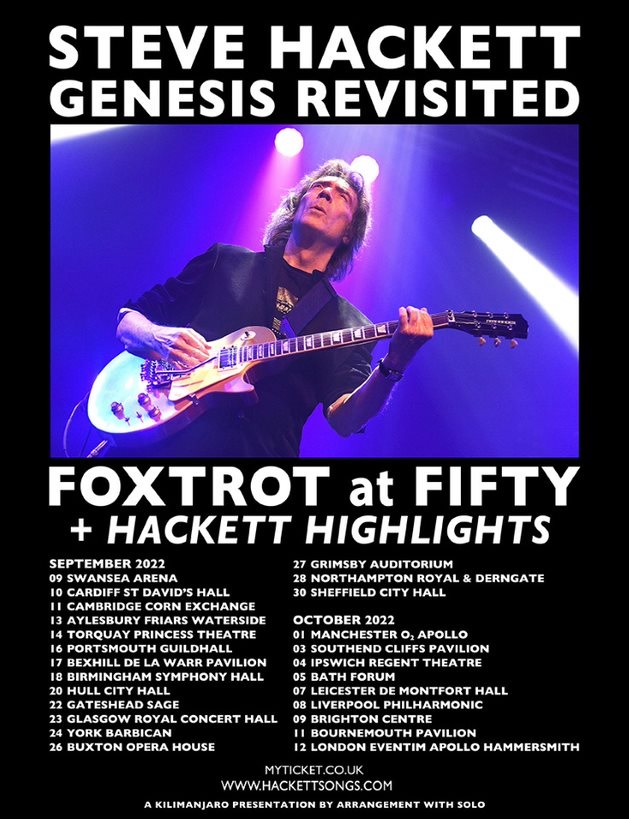