Each candidate has answered questions about local issues and why they want to represent the ward. Below are the responses from Ollie Sykes.

I enjoyed being a councillor previously and have been inspired by our Green-led council supporting those in most need in our city and advancing the climate change agenda. As an environment and climate change professional, I think I have a lot to offer in Wish ward and citywide.

From my previous experience, I know how the council works and will make an immediate contribution on issues of policy. At a local level, I know Wish ward well and I know how important it is for a community to have a reliable and responsive advocate in the council.

I lived in St Leonards Gardens for years and now live in Central Hove.

I’ll be responsive and accessible as a ward councillor. I’ll act on the results of the mini-Holland study towards safer walking and cycling. As a sea swimmer, I will fight to stop sewage dumping at sea.

I’m concerned about the current proposals and don’t think they reflect existing planning policy. The towers are overbearing and far too high. I would suggest to the developer that a more sensitive design is sought in collaboration with the local community, residents’ associations and ward councillors.

The housing crisis is acute in Brighton and Hove. A doubling of holiday lets in five years pushes rents up and I want to see more local powers here. I will also continue the Greens’ campaign for reform of the National Planning Policy Framework, which restricts local powers towards truly affordable housing.

There is a lack of public toilets along Hove seafront and some people relieve themselves behind the beach huts. The Hove Lagoon loos are in a state. What will you do to improve facilities?

I’m delighted that the Kingsway to the Sea project includes improvements to public toilets and that refurbishment of the King’s Esplanade toilets has started this month. Although they need action to be modern and clean, we are lucky. Many towns and cities have lost all their public toilets thanks to Conservative government cuts. 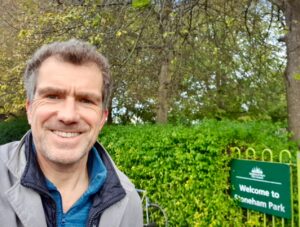 Hove has seen increases in reported crime following Conservative cuts to policing budgets and the commissioner’s decisions to de-prioritise community policing. I want to support residents by highlighting their concerns and pushing the Conservatives to be accountable to the communities they’re harming by ignoring crime, including vandalism.

When Labour ran the council, they stopped using glyphosates without plans other than manual weeding. The Conservative mishandling of covid and Brexit has created a national labour shortage, so not all weeding needs can be met. I’ll continue to work to develop an alternative solution that is not reliant on harmful chemicals.

Well-segregated cycle lanes will encourage more people to travel by bike and make our roads safer for all. Although there is a cycle lane on the A259, it currently causes clashes between pedestrians and people cycling. I, therefore, welcome increased space for walking and cycling as well as safety improvements.

Greens work differently to other parties as we are not “whipped” and instead aim to discuss and agree a way forward by consensus. I expect to agree with Green colleagues on most matters of policy but am prepared to vote differently if I feel that’s the right thing to do.

In the 22 years I’ve lived in Hove, I’ve always been keen to meet and work with people across all the communities here as a councillor and as a trustee of local community organisations. I would continue to do so in Wish ward as your councillor.