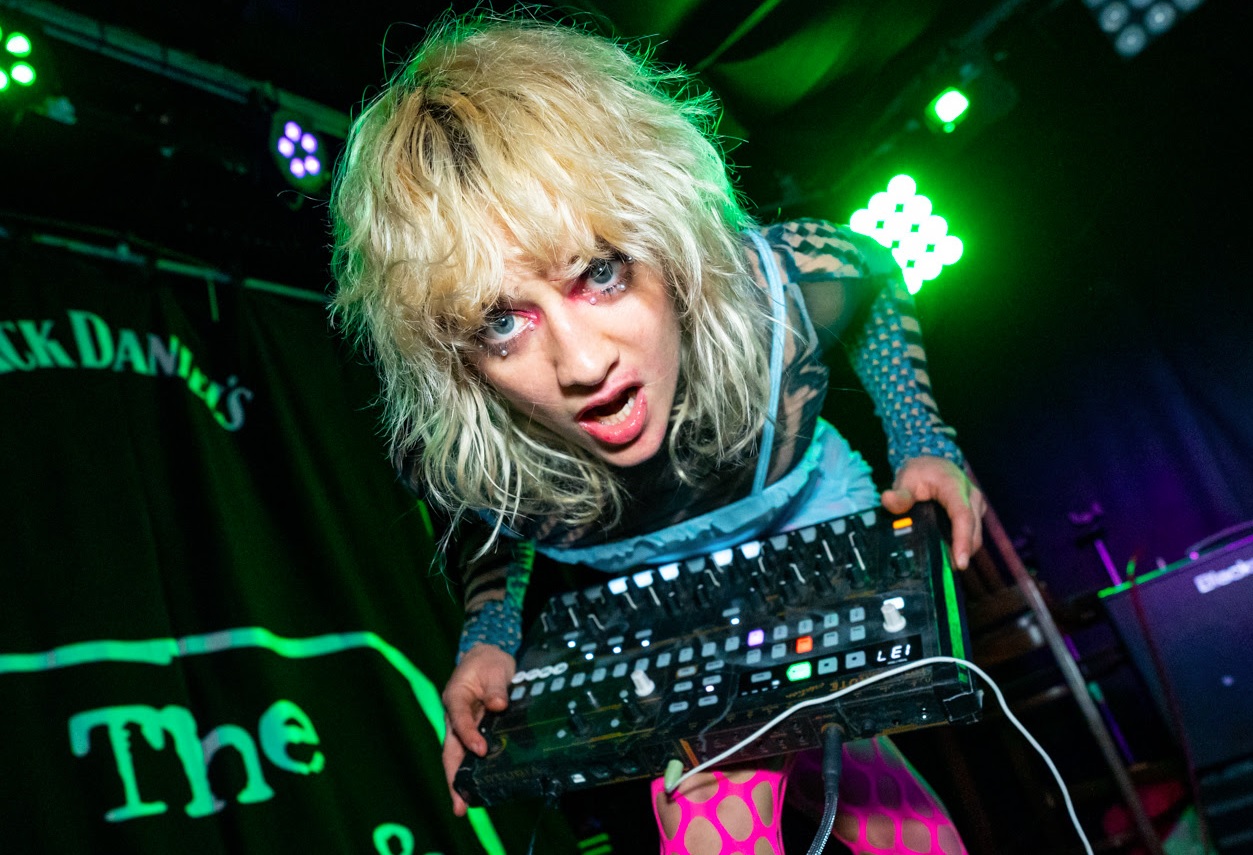 Tonight I was literally praying that the England vs Senegal World Cup Game wouldn’t run into extra time, as I, myself, had some running to do of my own! Thankfully the whistle blew for a three nil victory and a meeting with France is now on the cards. The second the ref put the whistle to his lips, I grabbed my camera and bolted out the door and legged it along to The Hope & Ruin on Queens Road in order to catch tonight’s headliners cumgirl8 (‘CG8’) in action. The event was organised by Love Thy Neighbour label and promoter and sadly I had missed this evening’s support acts Cowboyy and Austen Showers, but thankfully arrived with minutes to spare before the quartet took to the stage. Being a Sunday night and footie being on, it’s fair to say that the venue was sparse, but that certainly didn’t stop this lot from going for it. 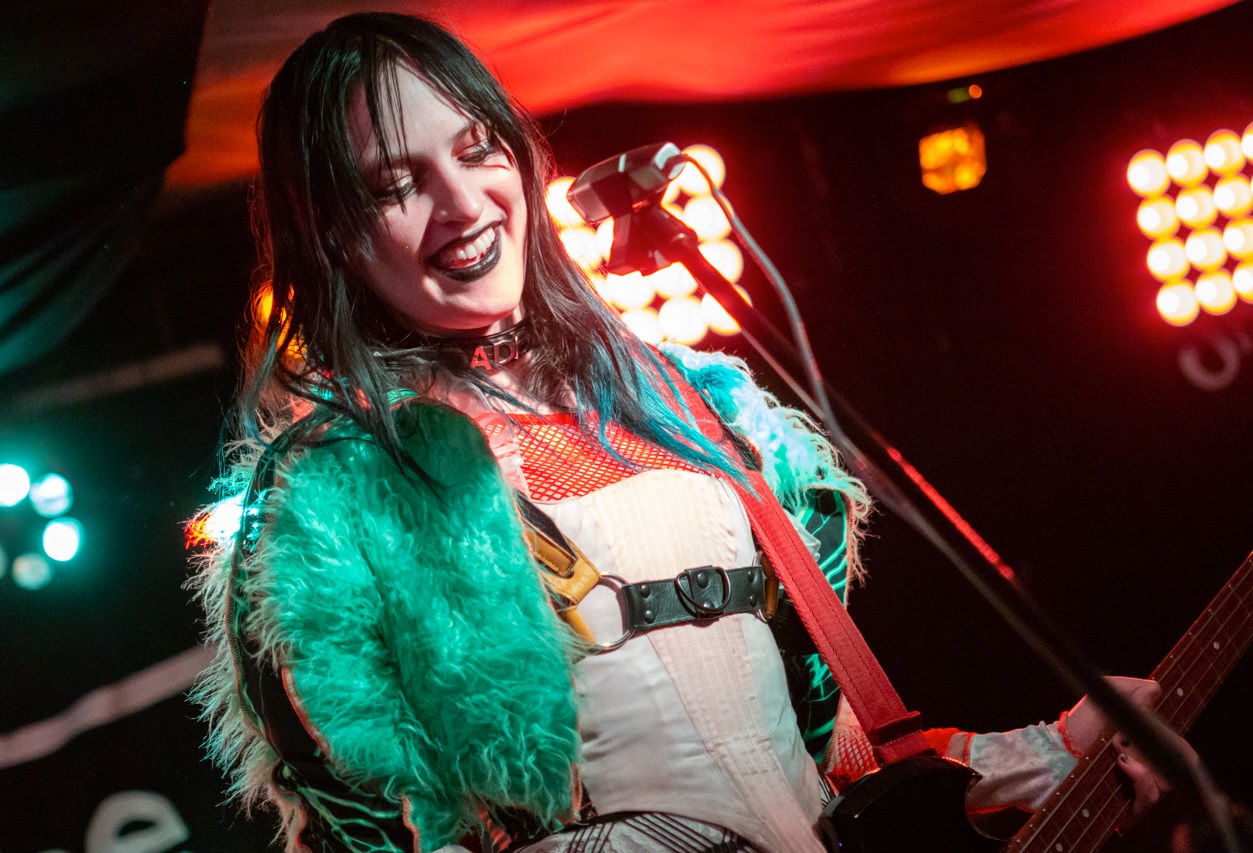 I was still determining what to expect from cumgirl8 as I’d only previously flicked through a few YouTube videos and a few tunes on Spotify, so I was unfamiliar with their output. 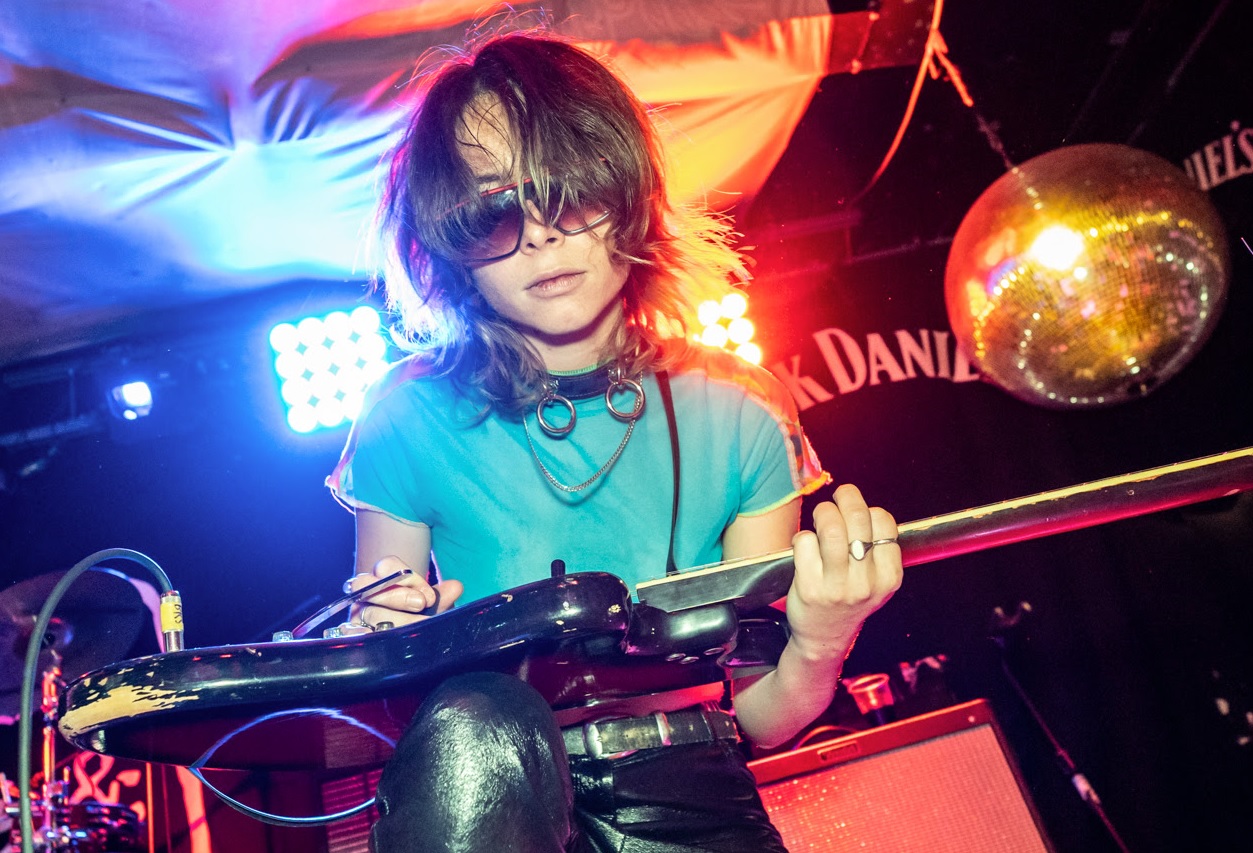 A gender-fluid four-piece consisting of Lida Fox on bass and vocals centre stage, Veronika Vilim on guitar and vocals stage left, Chase at the rear on drums and vocals, Avishag Rodrigues on guitar and Korg keyboard stage right. There are also numerous drum and effects boxes, but more on those later. 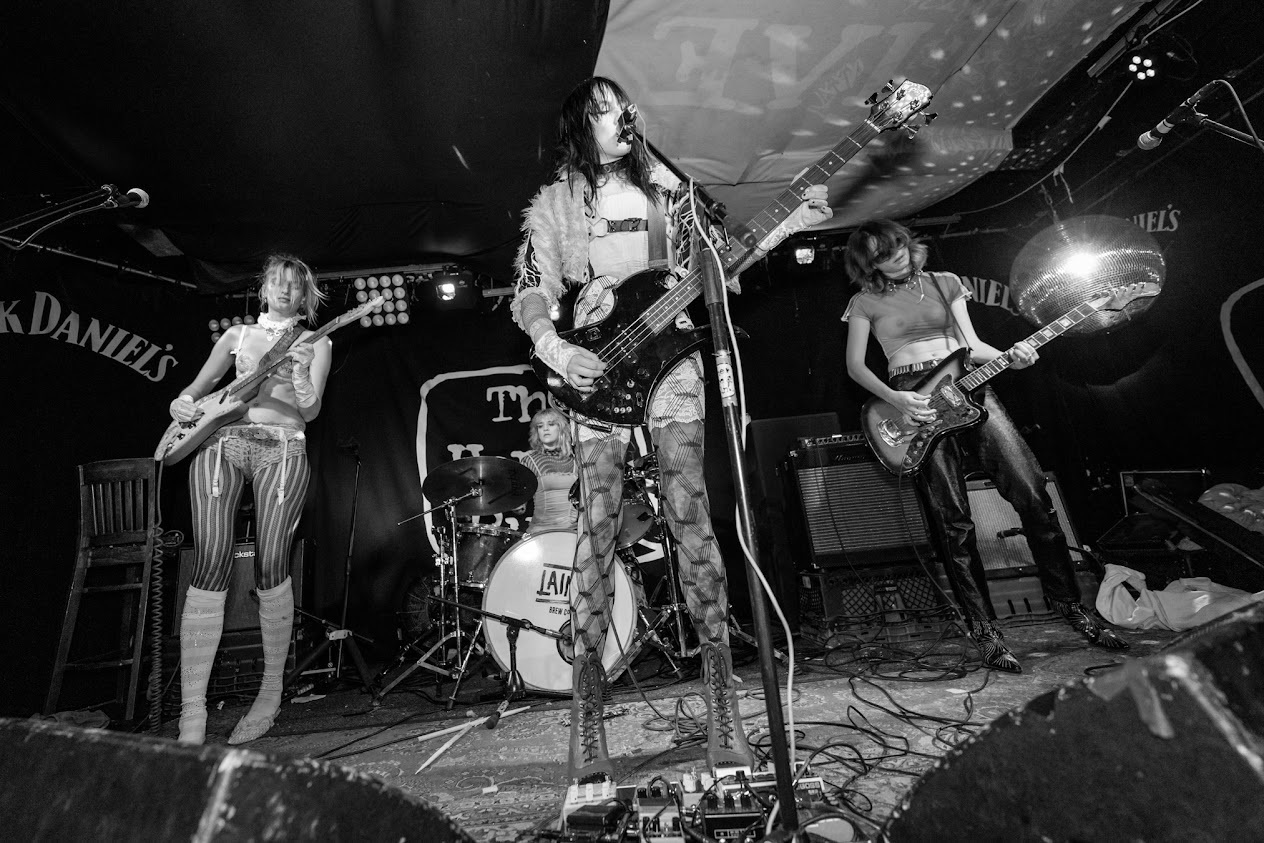 They kick off in fine form with ‘Waffles’, which sets the tone for the night. Their sound is described as art-punk, part performance art and part musical band, and I can’t disagree. They create a unique sound with layer upon layer and sharp punk outbursts. They’ve a sound that you can’t pigeonhole, but evoke some wildly different artists, such as Joy Division and The Slits. This band would fit perfectly on a bill with local garage punks, The Lambrini Girls. 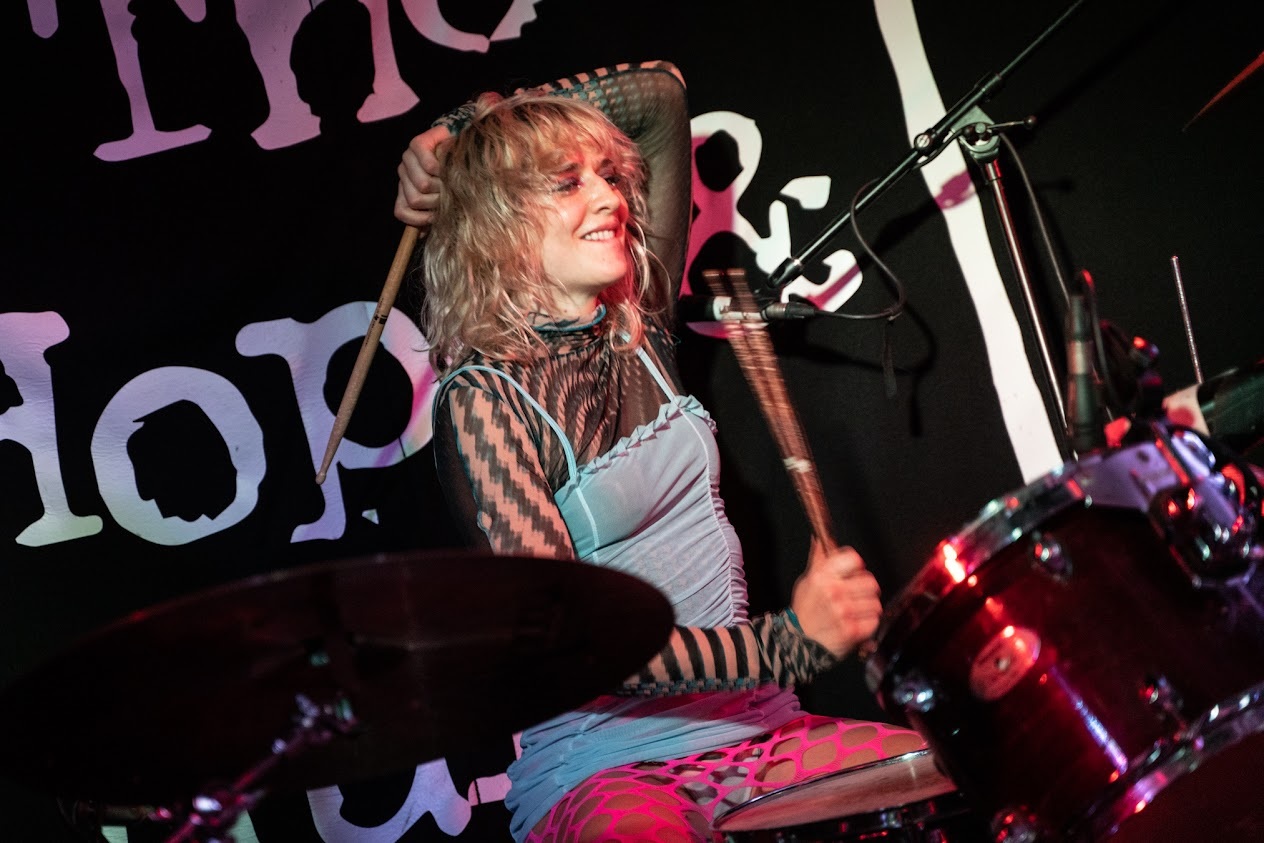 ‘Bugs’ follows, a track more 80s pop than punk, but a catchy little number. Avishag Rodrigues’ guitar work catches my eye with the strut and style of a young Johnny Thunders. 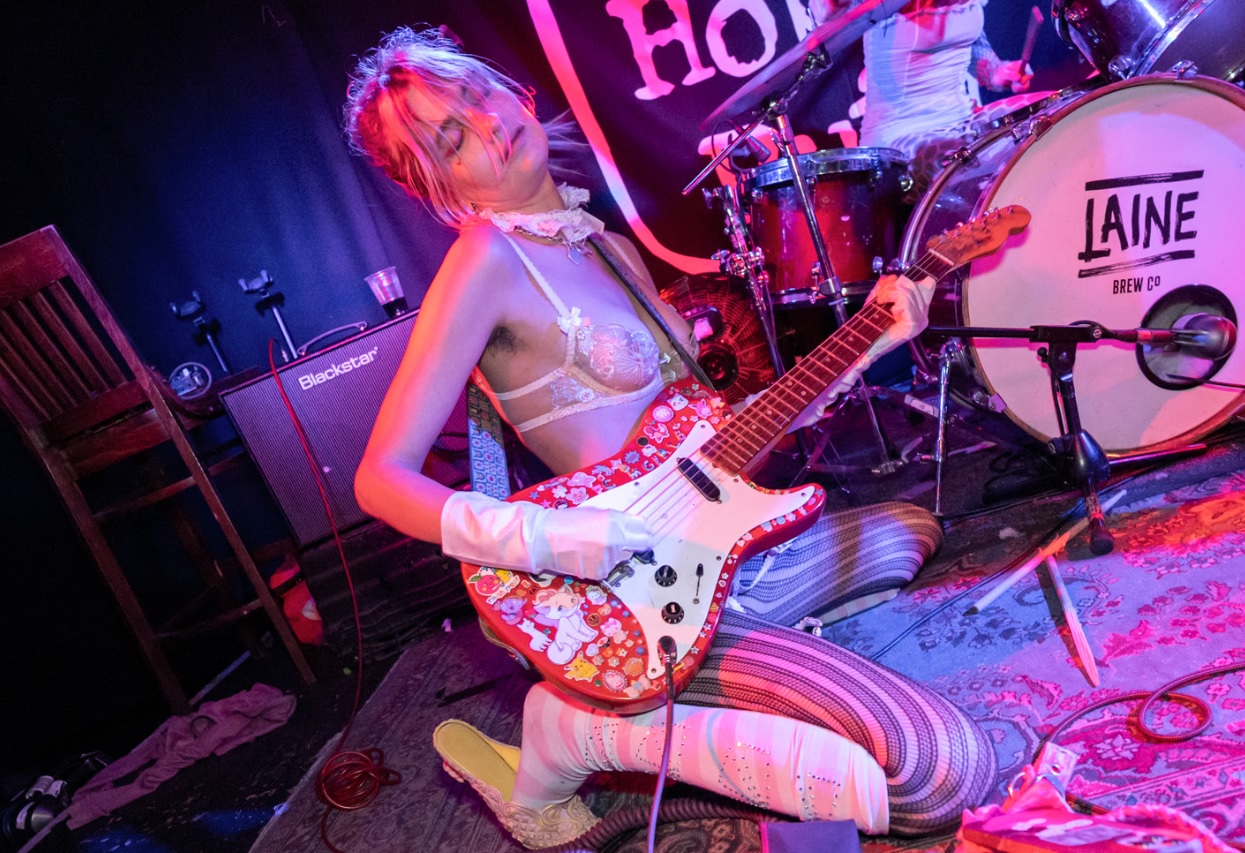 The first track to really grab me, though, is the recent single ‘Dumb Bitch’, dripping in discordant guitar harmonies. ‘Hourglass’ follows, and it’s a grower that slowly drags you in and then shakes you to the ground in fits of rage. ‘Take Me Home’ had a real New York 70s punk swagger, and I noted it as one of my highlights along with the impressive ‘Pluck Me’, which harks back to early 80s goth. 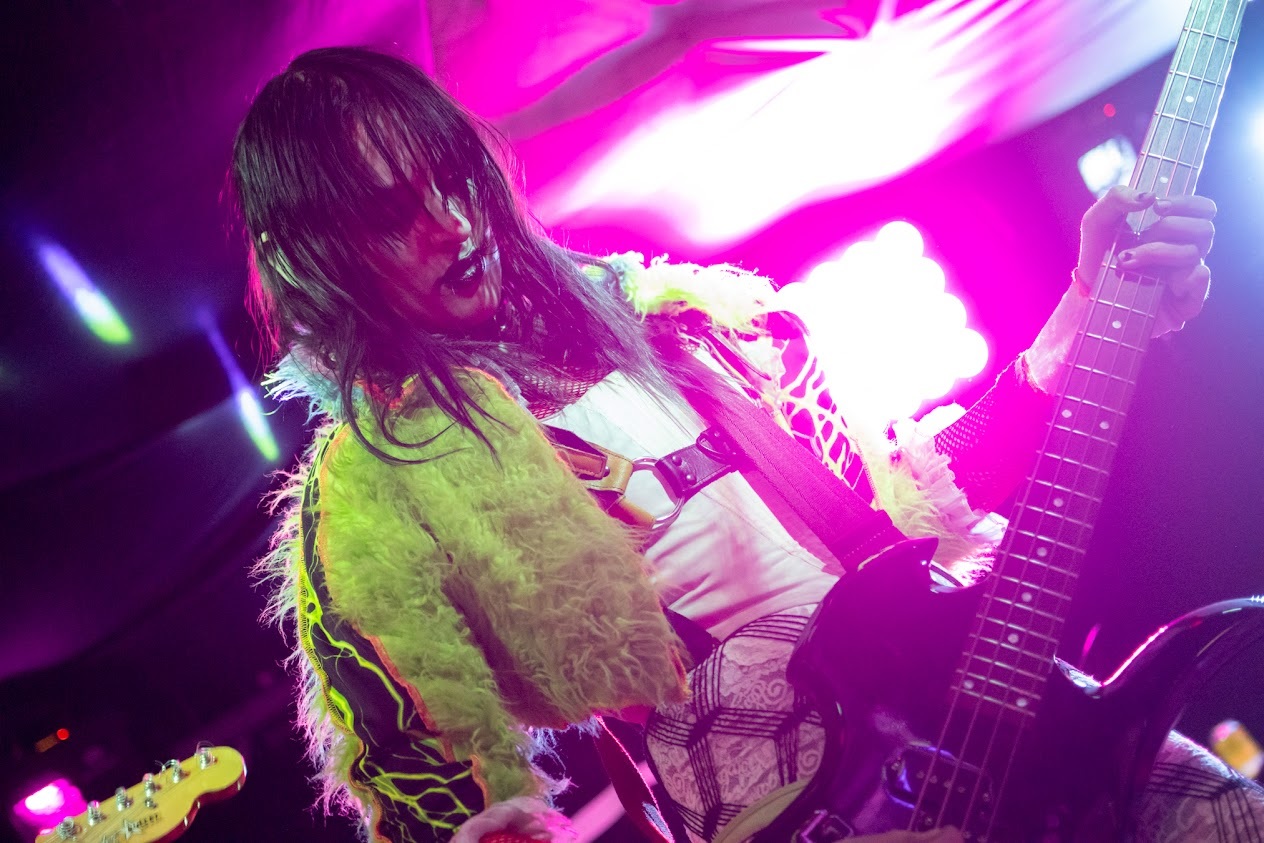 The set closes with ‘I Wanna Be’, and it’s all change as Vilim takes up the vocals and Chase, Fox and Rodrigues play a selection of effect boxes, drum samples, and even a child’s keyboard (B Toys Meowsic Toy Piano) is brought into the mix. There’s action from a Behringer TD-3-SR Analogue Bass Line Synthesiser, and there’s Arturia keys in there as well. These, along with the Korg, have taken over from the Burny bass guitar, Fender Bullet guitar and Silvertone guitar, which were used throughout the rest of the set. Loops layer on top of each other with hidden melodies scratching at the surface as the ‘I Wanna Be’ refrain repeats, and it all escalates into a weird wall of sound. 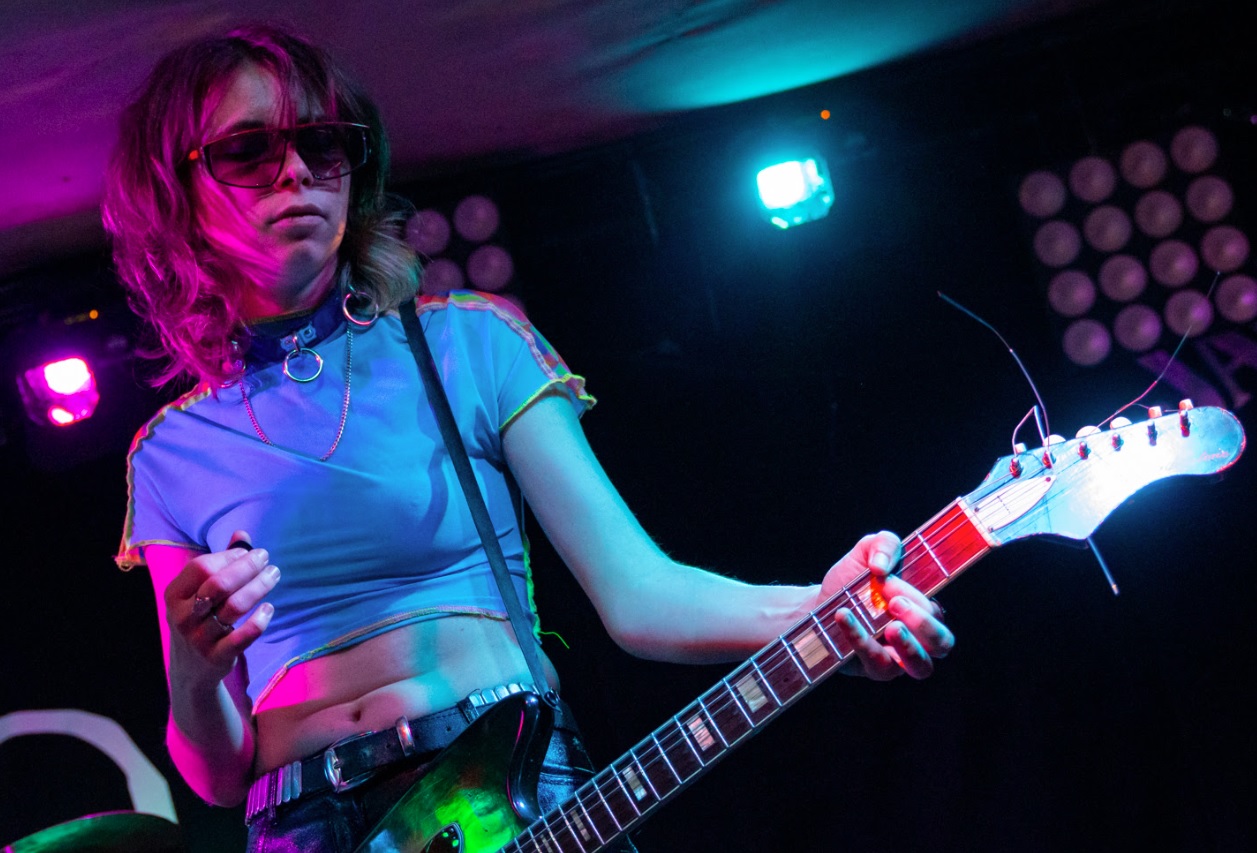 CG8 are certainly a band worth checking out live, as their uniqueness is a rare quality, and they put on a pretty special show you won’t forget in a hurry. They’d be an excellent addition to next year’s Great Escape Festival and I’m sure they’d go down a storm. 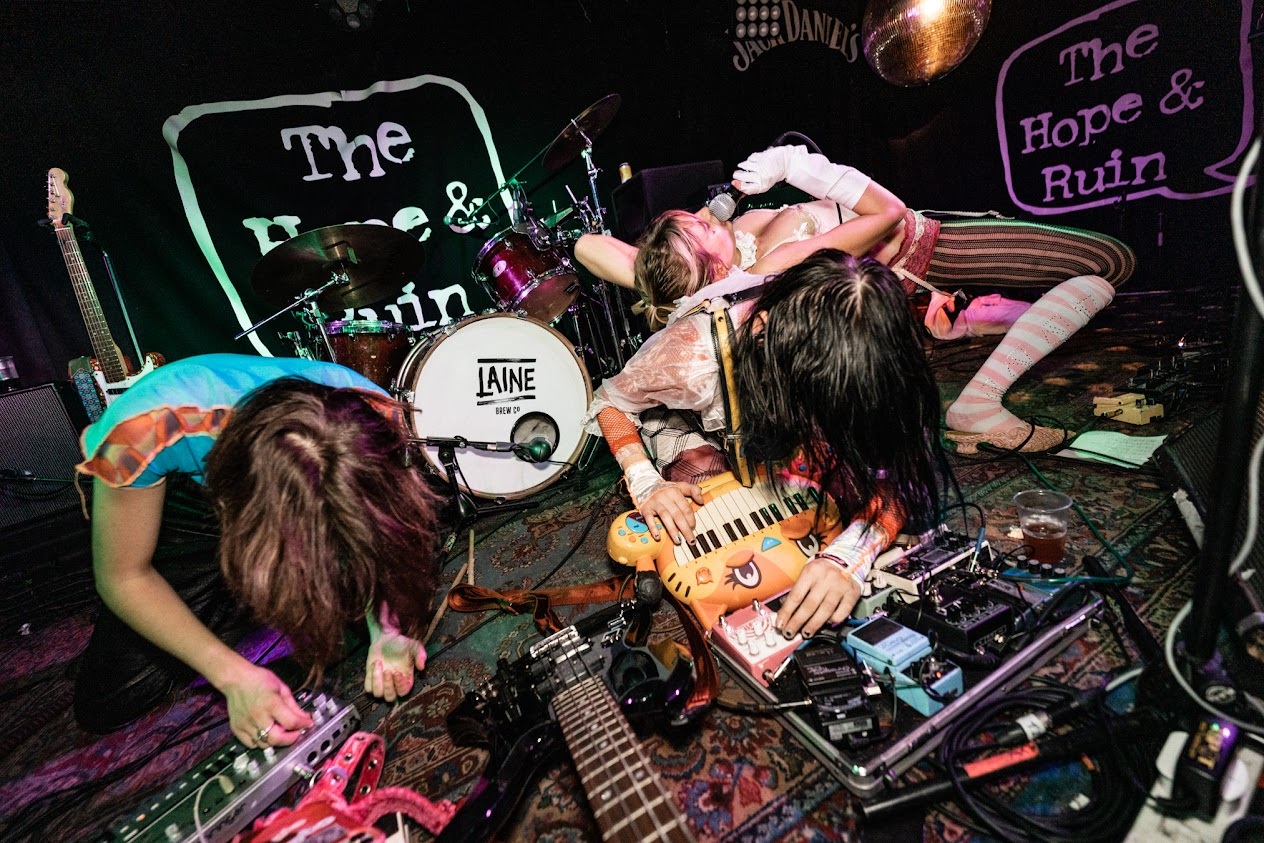 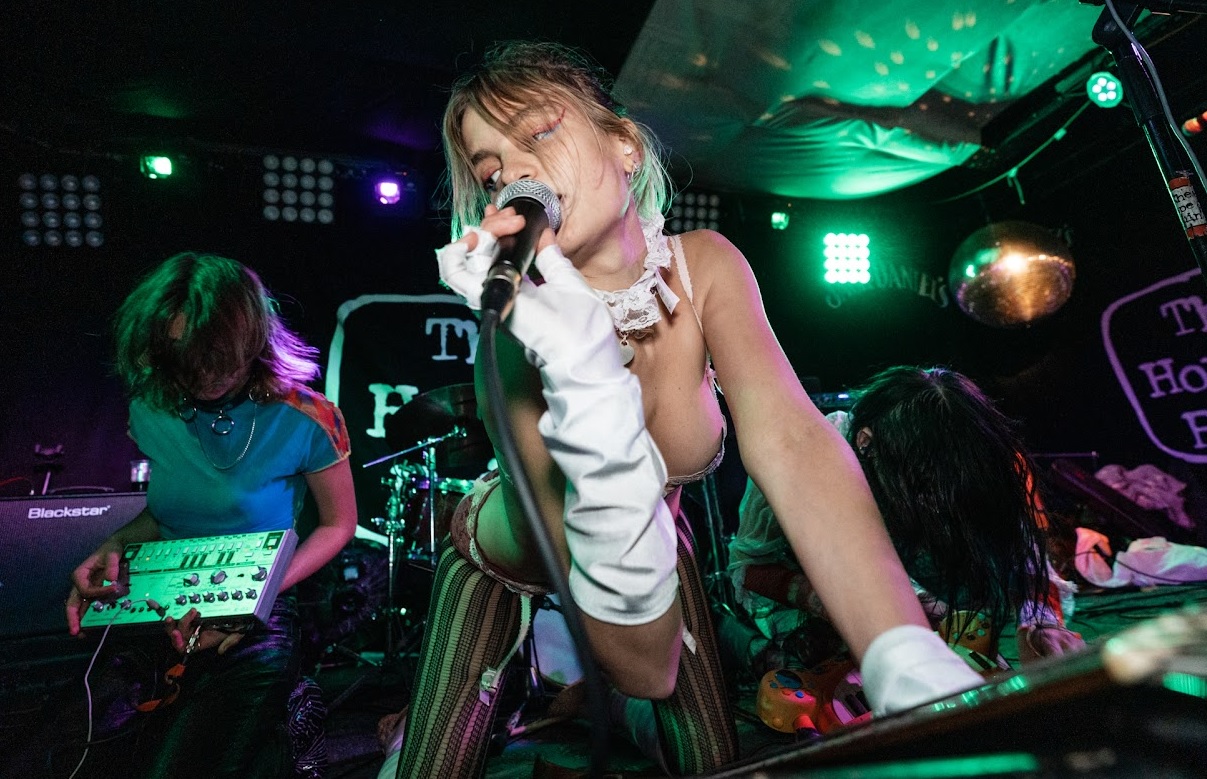 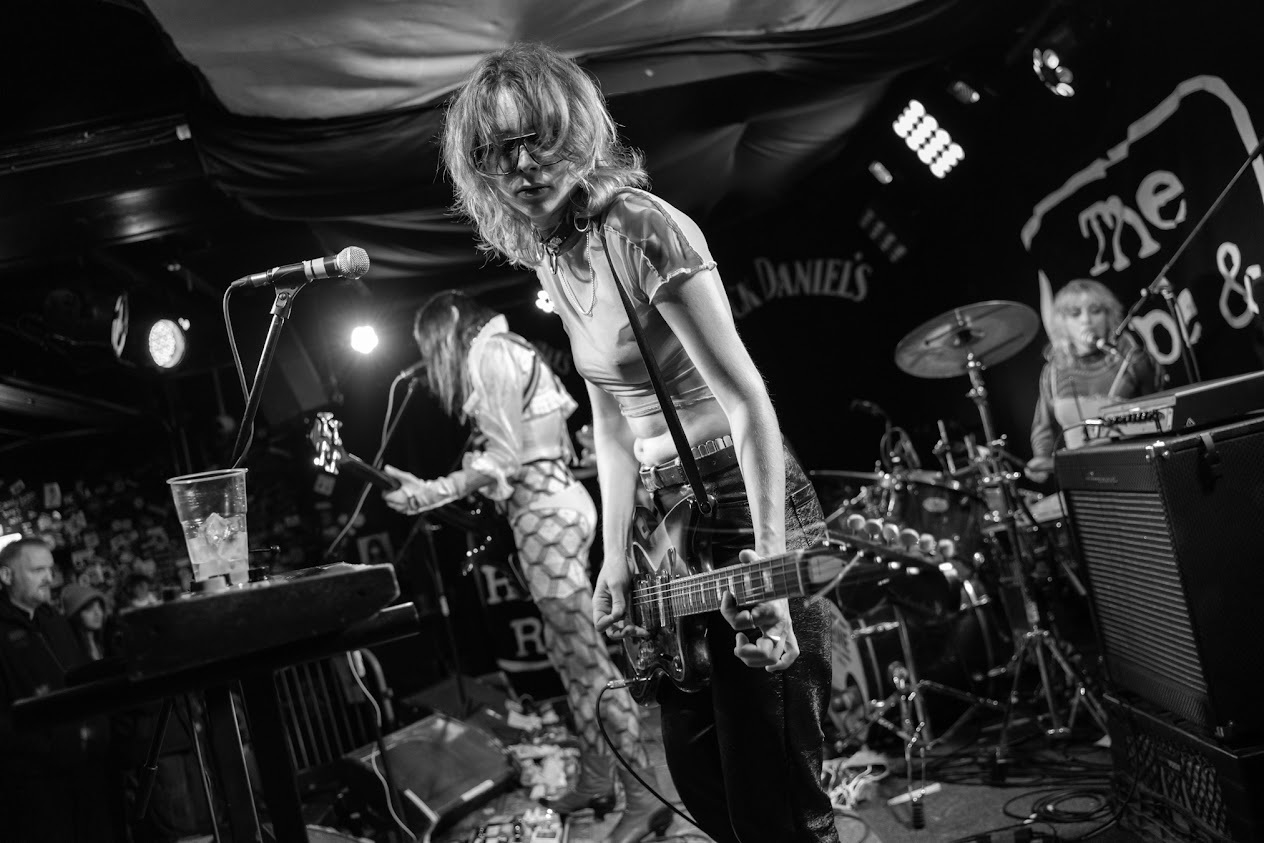 Don’t take our word for it, this is what others have said about the band:

“CG8 (aka Cumgirl8)—the self-described “sex-positive” band and creative entity dreamed up by Lida Fox, Chase Noelle, and Veronika Vilim—added fashion to their résumé last year with a clubby, nightlife-inspired collection. This season they brought their work into the sun and onto the street when they presented their sophomore collection outside Café Forgot on the Lower East Side on September 11. It was a real New York moment that created a bridge between Y2K and today”. -Vogue

“From the first time seeing them live, cumgirl8 has always felt part-punk rock, part-performance art. Delving into fashion pursuits featured in Vogue in addition to their latest conceptual music videos, it’s clear that the group’s creativity and performance quality is currently throttling at its full potential and it’s thrilling to see”. -Alt Citizen

“Brooklyn quartet cumgirl8 placed themselves at odds with the powers that be the second they gave their group its salacious name. It gets them booted from social media platforms and largely precluded from the pages of music’s major broadsheets, but their story doesn’t end with shock value. They may be provocateurs, but they also make a fiery brand of post-punk that would sound just as good under a tamer moniker”. -Fader.

“cumgirl8 is a rising punk band from NYC known for their raucous live shows. Blast the bombastic quartet’s spazzy spacey (and very solid) self-titled debut album below. And then go see them play. That’s the key. The key to everything”. -OMR 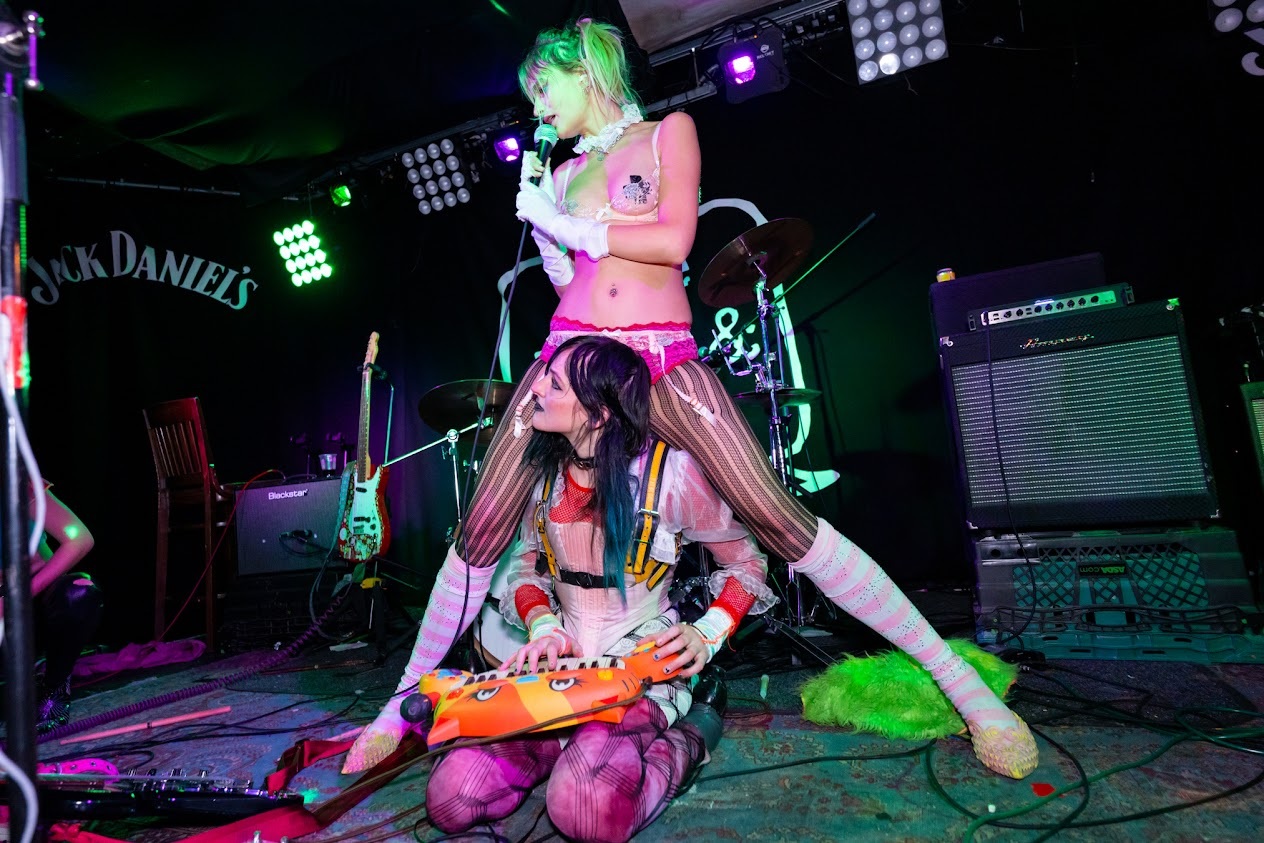 Check out their recorded material on their Bandcamp page HERE and find out further information by visiting them at linktr.ee/cumgirl8_ 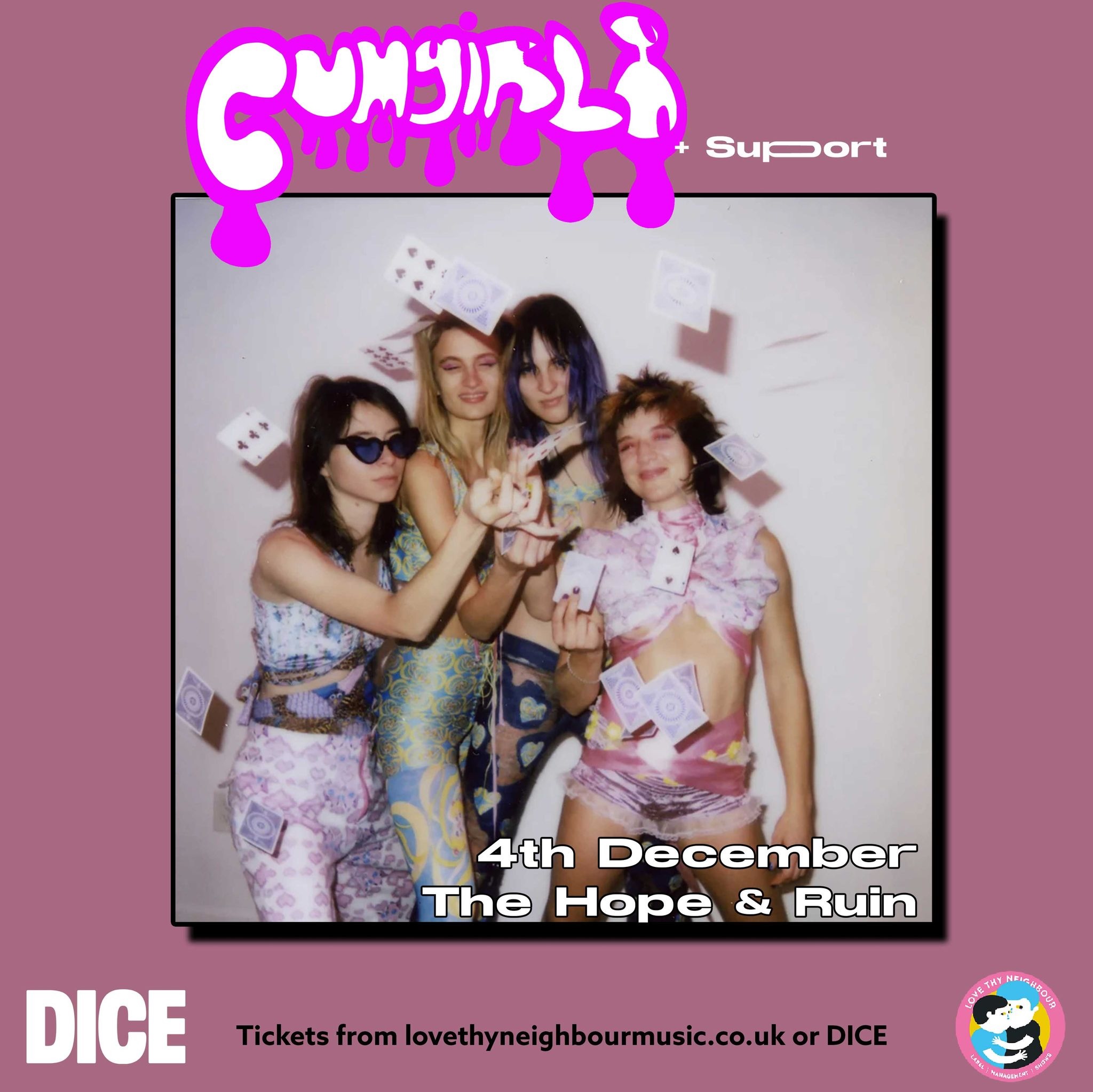 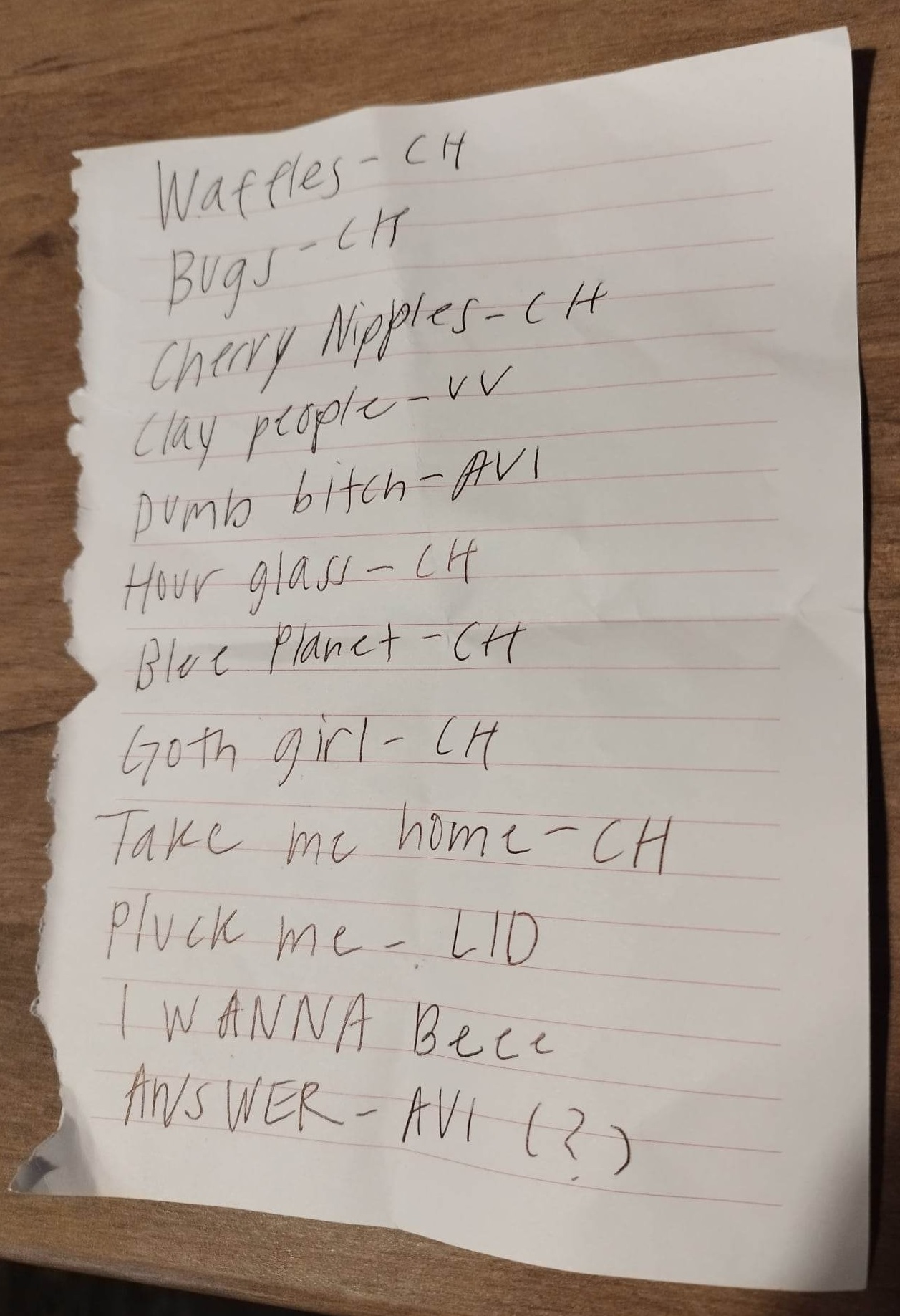 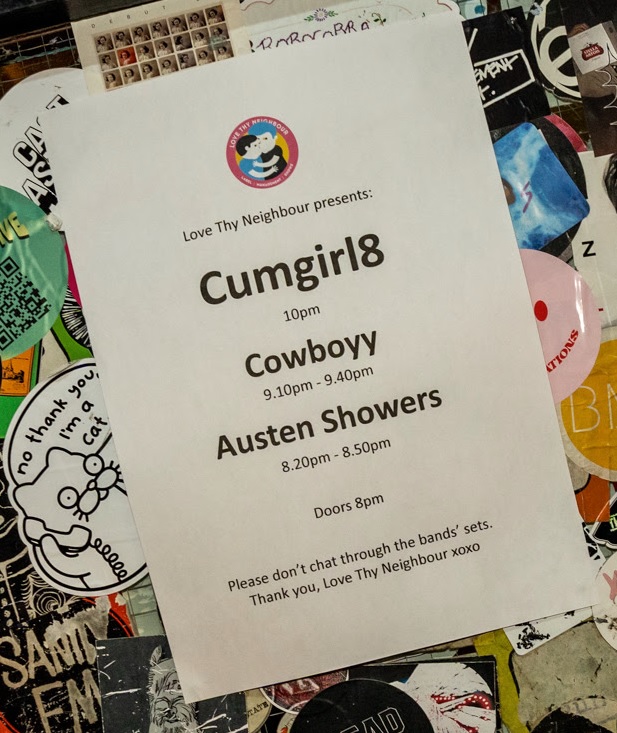