A third attempt to get permission for a penthouse flat overlooking Brighton Town Hall and “uninspiring” Bartholomew Square has been approved on appeal. 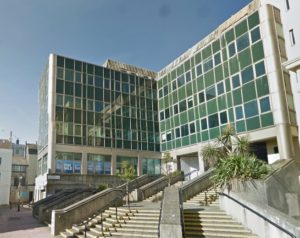 Priory House; Image taken from Google Streetview 2014, when the For Sale signs were up

West Acre UK Investments applied in June last year to build the flat on the top of Priory House, which has been converted from offices to flats.

It was turned down by planning officers last October because it would impact on views from Bartholomew Square – but a planning inspector has now allowed the plans, saying that apart from the town hall, the square is “uninspiring” and “dull”, and the flat would not adversely impact on it.

Planning inspector Sheila Holden said: “The main issue is whether or not the proposal would preserve or enhance the character or appearance of the Old Town Conservation area and the setting of the nearby listed buildings

“Priory House is part of a group of modern buildings that were constructed in the mid-1980s around Bartholomew Square. The group includes the Council’s offices (Bartholomew House) and a hotel (now the Jury’s Inn). The Grade II listed Brighton Town Hall dominates the east side of the square, which otherwise appears to be a rather under-used and uninspiring public open space with a restaurant at its centre.

“The additional storey would be set back from the sixth storey and significantly back from the main building edge. It would have a contemporary appearance with large expanses of glazing.
“The scale of the Town Hall, with its stucco facing and giant two-stage porticos, dominates the street scene. The bulk and mass of Priory House is little more than a rather dull backdrop to this grand building. In this context, the additional storey would not be especially prominent or noticeable, particularly as it would be set back from the existing mansard roof.

“The Government is seeking to significantly boost the supply of housing and requires applications for housing to be considered in the context of the presumption in favour of sustainable development. As I have found that the proposal would not be harmful to the heritage assets that are relevant to this case there can be no objection to the scheme. The provision of a single dwelling in a highly sustainable location would be a small public benefit which also weighs in the scheme’s favour.” 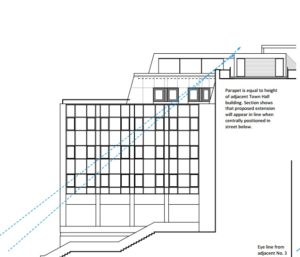 In applying for permission to build the flat on top of Priory House, which sits between the Thistle Hotel and Doctor Brighton’s, the developer’s architect Zinzan Stickland Thomas Architects said: “The proposed extension is intentionally simple in design – a minimal single storey structure with limited material palette. Conceptually the extension will be discreet, not drawing attention to itself, but also an intriguing piece of design for those who do notice.

“Care has been taken in the proportion and detail of the building within the context of its host. The roof fascia is also well set back from the parapet to the mansard, which is in turn set back from the main façade. Due to the gradual set back in cross section and the extent of existing built volume, the proposal will have minimal impact on the setting.

“It will also create a viable, high quality new dwelling, which makes the most of a potential site. The proposal intends to enliven an otherwise drab and uninteresting building and roof context as a positive enhancement.”

The appeal was overseen by planning consultants Stiles Harold Williams. SHW Planner Harriet Nind said: “Given the housing shortfall in Brighton and Hove, it’s a great achievement to have rightfully justified the creation of an additional family-sized home in such a sustainable central location.”

Five-storey Priory House was occupied by Brighton and Hove City Council up until 2011 and then remained vacant until it was bought by West Acre UK Investments in 2014.

West Acre is owned by Michael and Nazila Blencowe, who also own the estate agent Baron Homes and run the Windsor Court temporary accommodation scheme.

Before Priory House was sold, West Acre had successfully applied for permission to convert it into 40 flats under permitted development rights.