Brighton cat killed by air rifle after spate of attacks

The RSPCA is appealing for information after a cat was fatally shot in the head with an air rifle in Brighton in what is suspected as being part of a spate of similar attacks. 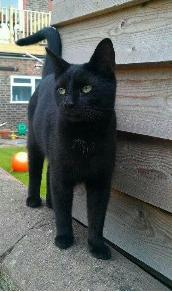 He was taken to a vet who X-rayed him and found there were three pellets in his body – one in the head and two others in his chest and abdomen. It is suspected that two of the pellets were old ones, which means the attacks happened over a period of time.

There have also been reports of potential other shootings of other cats in the same street.

Owner Clare Smail said: “We are absolutely devastated at this utterly pointless and callous attack.

“It makes me so sad to think that someone had been shooting at Charlie over a period of time – and that he had been wounded in the past. Our poor boy – he was such a sweetheart, and it makes me so sad that anyone could do that to him even once – let alone on multiple occasions – it’s just heartbreaking.

“He had been out for several hours, which wasn’t completely unusual, although he would always come back when you knocked on the back door, so he never went far. When we knocked on the door and he didn’t come back, we looked out for him, which is when we saw him lying in the neighbour’s garden.

“We have three other cats, who we are very concerned about now, checking on their whereabouts constantly – we are considering keeping them in all the time, although know that that would make them miserable.”

RSPCA inspector Liz Wheeler said: “Unfortunately this is not as rare an occurrence as you would hope. Cats – and wildlife – tend to be vulnerable to such deliberate attacks simply because they are out there in the open on their own.

“We would urge people to remember it is a legal as well as moral offence to cause deliberate
cruelty to an animal in this way. We have no idea about whether poor Charlie died instantly, or suffered a prolonged painful death, but whichever the case it is simply unacceptable to attack an animal this way.