The bloody history of Brighton’s pubs

Gruesome cases from Brighton’s past feature in the nation’s first ever guide to historic crimes in Britain’s pubs and hotels. 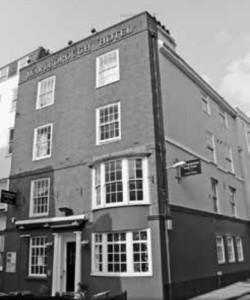 Murder at The Inn: A History of Crime in Britain’s Pubs and Hotels, reveals where to find more than 250 hostelries across the country linked to cases of murder and mayhem.

As well as featuring well known criminals like the Krays, Dick Turpin and Jack the Ripper the book also reveals the details of criminal cases from Brighton.

A whole chapter is devoted to the sorry tale of how Thomas Packham, landlord of the Marlborough Inn in Princes Street, killed his wife Lucy in a drunken rage.

But despite an inquest finding Mrs Packham’s cause of death to be wilful murder at Thomas’s hands, a jury later acquitted him of murder and guilty of the lesser charge of manslaughter.

The hotel, now the Marlborough Pub and Theatre, still remembers the unfortunate victim, and serves a Lucy Packham cocktail made with rum, pineapple juice and a splash of Chambord.

Bar manager Cat Kimber said: “We’ve got a story on the wall here. Whether she actually haunts us or not, most of believe she still has a presence here.”

Other Brighton cases include how acid bath murderer John George Haigh lured victims from the Metropole, the bombing of the Grand Hotel in 1984 and a man who was apprehended at The Windmill, now the Dyke Pub & Kitchen for murder in 1887.

James Moore says: “The history of Britain’s pubs, inns and hotels has gone hand in hand with the history of crime.

“Now, for the first time we link pubs that can still be found today with captivating and sometimes horrifying tales from their past.”