Antiques worth at least £6,500 were stolen in a burglary at a house in Hove.

Sussex Police said: “Detectives are seeking thieves who broke into a central Hove house and stole 23 valuable items, including vases, statues and china believed to be worth at least £6,500.

“In the early hours of Saturday 28 March the items were taken while the man was asleep at the address in Pembroke Crescent, Hove.” 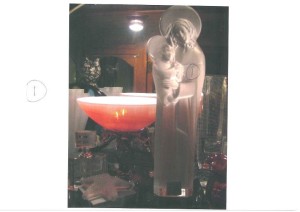 Detective Constable Jane Kemp, of the Brighton Priority Crime Team, said: “These are very individual and distinctive items and we are sure anyone who is offered them for sale will realise this.

“We are also making inquiries in the Lewes and Arundel areas where it is felt some of the items may turn up.

“If you have been offered any of them, or have any other information about the burglary, please contact us.”

The items stolen include