A Brighton kebab shop has been told that it cannot extend its opening hours until 4am.

Sussex Police objected to the proposed longer hours and said that officers were investigating a sex attack reported to have taken place at Albion Kebabs, in Queen’s Road, Brighton.

He wrote: “An alleged serious sexual assault took place inside the premises in October 2014 at approximately 2.42am when the premises was still open and trading, despite the fact that the permitted hours for late night refreshment ended at 1am.” 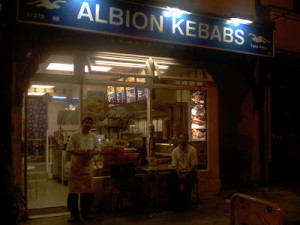 Albion Kebabs has a licence to open until 1am from Monday to Thursday, until 3am on Fridays and Saturdays and until midnight on Sundays.

Owner Adriatic Dema wanted to extend this until 4am on Fridays, Saturdays and on Sundays before bank holidays, and until 2.30am on all other days.

Councillors, council officials and residents also said that the proposal should be turned down. They said that the kebab house falls within the council’s “cumulative impact zone” where the presumption is against new and extended licences for most establishments.

They also said that the application failed to show how the licensee would stop its customers causing trouble in the area.

A council licensing panel met on Tuesday (19 May) and turned down the application.