A new cafe in the Brighton Lanes was evacuated yesterday after a fire broke out in its lift shaft. 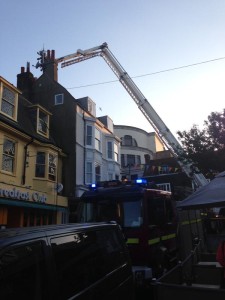 Firefighters were called to the Breakfast Club in Market Street at 7.44pm last night after reports of smoke billowing from the building.

Two crews from Preston Circus used a thermal imaging camera to locate the source of the fire which was found to be in the third floor lift shaft of the property.

They used small cutting tools and one hose reel jet to tackle the flames then spent 20 minutes damping the area down.

A level one investigation was completed and the cause of the fire was found to be accidental.

The cafe hoped to be open again today, but this morning tweeted it would be closed until tomorrow for repairs.

Had a little fire in our new baby #Brighton BC yesterday. We’ll be closed today for a few repairs but will be back tomorrow ✌️👊