Brighton University is to lose another senior figure with the retirement of Lord Mogg as chairman of its board of governors. 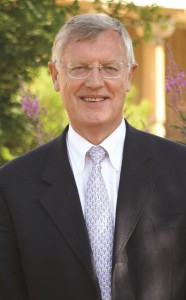 Lord Mogg’s announcement comes five months after the university’s vice-chancellor Julian Crampton said that he would be standing down in early 2016.

The pair joined the university ten years ago and together have overseen the growth of the university which will continue with the development of the Circus Street and Preston Barracks sites over the coming months.

A new vice-chancellor has yet to be announced but Lord Mogg will be succeeded by John Harley, formerly the board’s deputy chairman.

Lord Mogg, who officially retired as chairman on Friday 31 July, said: “It has been an enormous honour and wonderful experience to chair the board of governors over such a crucial period in the university’s history.

“Although our admirable vice-chancellor Professor Julian Crampton retires in a few months, I believe the relationship between the board and the vice-chancellor has greatly contributed to the university’s considerable success.”

Mr Harley joined the board as an independent member in 2008 and became deputy to Lord Mogg in 2012. Formerly a senior partner with the audit and professional services firm Ernst and Young, he led its private equity business for Europe.

Mr Harley has extensive experience in audit, business advisory services and corporate finance and has led UK, European and global practices and industry sector teams specifically for the telecoms, technology and media and entertainment industry sector.

Mr Harley said: “I am honoured to have served on the university’s board for the last seven years. I look forward to working with the staff, students and governors to further enhance its infrastructure, academic offerings, research and overall reputation in the future.”

Professor Crampton said: “Lord Mogg has been a tireless supporter of the university and has helped guide the university to being the successful and progressive institution that it is today.

“He will be missed and on behalf of the entire university community I would like to thank him for his unfailing commitment to this institution.

“Under his governorship the university has made tremendous progress. We have opened the £25 million Checkland Building at Falmer, home to the School of Education, the £23 million Huxley Building in Moulsecoomb, housing state-of-the-art teaching and research laboratories for the School of Pharmacy and Biomolecular Sciences.

“We are now working in partnership with Brighton and Hove City Council and Cathedral Group on the major development of the Preston Barracks site in Lewes Road, and Circus Street, close to our Grand Parade Campus in the city centre, and we have and will continue to sponsor academy schools across Sussex.

“Lord Mogg is best known by thousands of graduates for leading awards ceremonies but his work behind the scenes has helped the university grow in both size and student population.

“The university, with campuses in Brighton, Eastbourne and Hastings, has expanded and continues to be one of the most popular for student applications in the country. We now have more than 21,000 students and our Hastings campus, which opened in 2003 with just 40 students, now has 800.

“In addition, the university’s research is now ranked 27th out of 128 research institutions in the UK for its world-leading research impact, placing it in the top 25 per cent in the sector.

“Today, the university supports over 7,000 jobs and generates £700 million per annum for the local, regional and national economies.”

Lord Mogg, knighted in 2005 and appointed a life peer as Lord Mogg of Queen’s Park in 2008, is a former chairman of the energy watchdog Ofgem and now European adviser to the authority and chair of two European energy regulators’ committee.

He was appointed one of the 12 independent members of the university’s board in 2005 and was elected chairman the following year.