A North Laine flea and vegetable market has been given a reprieve after councillors defied planning advice and refused plans to build an office block on it. 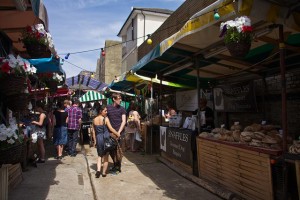 Planning officers had recommended it be granted as the need for office space outweighed the historical significance of the former Edwardian barrow yard.

Councillor Phélim Mac Cafferty said: “There is no reference in the planning application to the 1995 decision to protect the unique environment and urban farm.

“The North Laine heritage has been assessed before and all developments must be in keeping with Brighton’s conservation area.”

And Leo Litman added: “The market has led to job creation already, and I am in favour of a thriving market. I don’t want to see an ugly, horrible building if people are already making a good living out of it.”

Ward councillor Lizzie Deane also wrote to the committee, opposing the proposal. She said: “I do not believe that the barrel roof arrangement sufficiently safeguards the outlook for affected nearby residents, it is not in keeping with the North Laine Conservation Area.

“It would destroy what has become a popular market space and the increasingly rare cobbled yard that I believe to be an important relic of the North Laine’s industrial heritage.”

Letters have been received from 31 neighbours, including the Heart and Hand Pub, objecting to the proposed eight-unit office block.

Objections include loss of commerce to the North Laine area and insufficient demand for more offices when there is already a surplus in central Brighton.

The North Laine Community Association also objected to the application because the site is small, quirky and offices would be an overdevelopment of the area.

Mrs Clark of Queen’s Gardens told councillors that Diplocks Yard should continue as a combination of industrial and cultural dwellings with the market because this is more in keeping with the area.

She said there are already numerous offices in North Laine including in Trafalgar Mews, and that development of the site would also result in loss of privacy, daylight and increased noise and traffic.

However, the fact officers recommended the application should be granted indicates it’s more likely Sussex Property Investments would succeed if they choose to appeal yesterday’s decision.

Councillor Maggie Barradell suggested the planning committee wait because there are currently two similar appeals with planning inspectors and the result of these are not yet known.

This latest application is the ninth in the past ten years seeking to build on the yard. All previous applications have been either refused or withdrawn.