The owner of one of Brighton’s most magnificent Regency buildings is seeking a new owner who can carry out his dream of restoring it – but only the right candidate will do.

Tony Antoniades last month secured planning permission to convert the Grade I listed Malborough House in the Old Steine back into a family home after many years of neglect.

But at 74, the company director says he is now too old to carry out the project himself, instead vowing to find the right person to pass the baton onto.

However, he warned that while he might be willing to drop his price for the right buyer, he would not be selling to any Tom, Dick or Harry.

Mr Antoniades said: “Am I going to have time to do it? I think the person who needs to do that needs to be of high net worth, but younger than me.

“I want to see it sold as a finished project where we can control the outcome and avoid gold taps, use modernisms which are non intrusive.

“It’s not going to be young Mr Boyband or a DJ getting involved to heighten their profile – any individual will be carefully vetted. In this case I think less is more. I would be prepared to accept less to find the right man or family.”

The house has lain empty since the 1990s, when the town’s tourist information office moved to the Royal Pavilion building.

Mr Antoniades bought it from Brighton and Hove City council ten years ago, when it was already showing signs of neglect, and says he has not been able to do anything with it in the meantime as all proposed uses were rejected.

“The council opposed all approaches from 15-20 potential tenants – everything from casinos to therapies to offices.

“In 2012, the council tried to compulsorily purchase it, but they didn’t have the funds. Two years ago, we had three squatter camps.”

The Prince of Wales, later the Prince Regent and then George IV, came to stay in 1789 and 1795, while his Pavilion was being converted from a farmhouse into Nash’s whimsical Indo-Saracenic masterpiece.

However, although the interior designed by Adam is described by the council’s heritage team as “equally fine”, the fireplaces were lost when the warehouse they were stored in was destroyed by fire.

And Adam himself never completed Marlborough House, with just three rooms on the ground floor his own work.

Mr Antoniades is now talking with Savills with a view to putting it on the market, and is also putting out tenders within the next six to nine months for the restoration work.

And he has raised the prospect the house might one day be open to the public, saying: “I’m certain we can agree something with the authorities where the building could be given access for 21 days a year.”

He also strongly rebutted speculation it might be turned into a party house, sparked in part by the lavish details of the approved application, which included a jacuzzi and sauna as well as lodgings for staff. 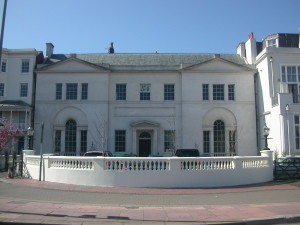