Brighton student bartender: ‘How I was trained to push booze on drunk customers’

A Brighton student has written a shocking account of how he was trained by a city venue to sell as much booze as he could to drunk customers. 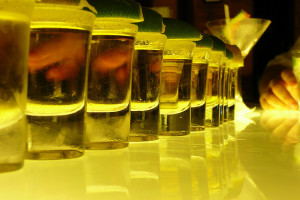 picture of shots on a bar by mike on Flickr

The account, published by Sussex student newspaper The Badger, details the anonymous student’s “tumultous” summer spent working at a Brighton bar, also not named and where they still work.

While they marvel at the disregard their bosses have for customer safety, and the capacity of their fellow students to drink themselves senseless, they nevertheless say they have enjoyed the experienced.

Talking about training, the student says: “I learned more about the kind of company I was working for, than about customer service…reading between the lines I was beginning to understand that I was being conditioned for one thing, and one thing only: to make money.

“I was (and remain to this day) actively encouraged to sell as much alcohol as humanly possible, with little, or indeed no regard for the duty of care over the individuals I would sell to. Hammering this into me from my first day was altogether unsettling.”

And the drinking reached its peak in Freshers Week. They say: “I have never before seen, nor will I ever see again, such all-consuming drunkenness. Such mindless and wanton disregard for personal limits, safety and dignity. Students merrily hitting the figurative bottle with impressive ferocity…”

But ultimately, they enjoy working there: “Really, all you have to do is take out the worrying levels of consumption, the inevitable tears, the odd fisticuffs, the loss of self respect and/or all personal belongings, the financial cost, the complete and utter disregard for cleanliness and hygiene, the awkward next mornings ‘I’ll… just see myself out?’, the inevitable existential crisis that comes with each and every hangover, the fear of knowing you texted that one person you weren’t supposed to text saying that thing you weren’t supposed to say.

“Yes, if you take all of that out, it’s really great fun.”

But the account does not sound like fun for one police officer who helps pick up the pieces after binge drinking in Brighon.

Jean Irving, head of licensing for Sussex Police, said: “I am very saddened and upset, although not surprised, to read this. We know there are a small number of venues who will put profits above peoples safety, and when we can prove that we will do everything in our power to bring enforcement action against them.

“We have little tolerance for the type of business practices I have read within this article. Police have a tough task trying to compete against the mindset of some businesses, who will do whatever it takes to make money and have little or no social conscience.

“We will protect the identity of anyone who is willing to come forward to provide us with information of this type and give us the evidence to be able to bring an irresponsible premises to account.”