University of Brighton research has helped develop a simple test using raisins to forecast a child’s attention and academic achievement. 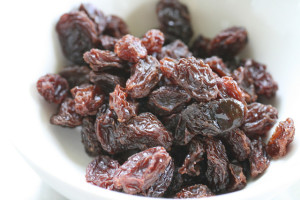 It can predict how well a toddler will perform academically at age eight, according to the research.

Using just the piece of dried fruit and a plastic cup, the test is based on how long a 20-month-old child can wait to pick up a raisin in front of them.

The toddlers were given a raisin that was placed under an opaque cup within easy reach. After three training runs, toddlers were asked to wait until they were told (60 seconds) they could touch and eat the raisin.

During the study it was found that those who were born very prematurely were more likely to take the raisin before the allotted time. In a follow on study the academics found that those who couldn’t inhibit their behaviour as toddlers were not performing as well in school as their full-term peers seven years later.

Dr Suna Eryigit-Madzwamuse, Research Fellow in the University of Brighton’s College of Life, Health and Physical Sciences, co-authored the study Preterm Toddlers’ Inhibitory Control Abilities Predict Attention Regulation and Academic Achievement at Age 8 Years, which is published in the November issue of The Journal of Pediatrics. To view the online version of the study visit www.jpeds.com

Dr Eryigit-Madzwamuse said: “We knew the adverse impact of preterm birth on attention and academic success from our past research. This study sheds light on its underlying mechanism.

“This provides crucial knowledge for designing early education strategies that will build preterm-born children’s resilience which in turn will promote their development and achievement at school.”

Data were collected as part of the prospective Bavarian Longitudinal Study which began in Germany in 1985 and is still underway. During the study, 558 children born at 25 to 41 weeks gestation were assessed for self-control once they were 20 months old. The results of those born preterm between 25-38 weeks were compared to those born a healthy full term between 39-41weeks.

Around age eight, the same children were evaluated by a team of psychologists and pediatricians using three different behavior ratings of attention from mothers, psychologists and the whole research team. Academic achievement – including mathematics, reading and spelling/writing – was assessed utilizing standardised tests.

The findings concluded that the lower the gestational age, the lower a toddler’s inhibitory control – and the more likely those children would have poor attention skills and low academic achievement at eight-years-old.

Julia Jaekel, lead author of the study and honorary research fellow at the University of Warwick and Assistant Professor of child and family studies at University of Tennessee, Knoxville, said: “This new finding is a key piece in the puzzle of long-term underachievement after preterm birth.”

The academics believe that being able to identify cognitive problems early on could result in the development of specialist, tailored education to help prevent these children underachieving at school and later on as adults.