Scarves for the homeless hung around Brighton church

Handmade scarves were tied to trees and posts around St Peter’s Church, Brighton as a donation to the homeless. 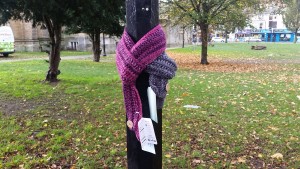 Isabelle Mounet, who owns independent crochet business Babay Fay, attached a hand written note to each of the 11 scarves she made.

They were then distributed on Wednesday, November 13 as a sign of goodwill to those sleeping rough.

She said “I may not be able to give homeless people a roof over their heads but I could give them a scarf and a little poem to tell them that they matter.”After starting her business this year, Mrs Mounet believes paying forward others’ kindness is a key moral principle. 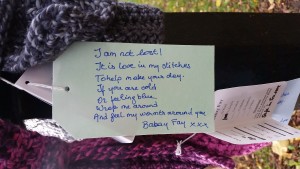 St Peter’s Church houses rough sleepers through the winter months as part of the Brighton and Hove Churches Night Shelter project. Mrs Mounet’s scarves were well received with all but three gone within the first night.

The notes read: “I am not lost! It is love in my stitches. To help make your day. If you are cold or feeling blue, wrap me around and feel my warmth around you.”

Homelessness is an increasing issue in Brighton, with the numbers of those sleeping rough increasing rapidly in recent times.

The Brighton Housing Trust runs severe weather shelters for those sleeping rough in the winter months. However, this was only open for 12 nights last year leaving many on the streets for increased periods.