Hanover gets an early spring clean

The latest Cityclean-backed community clear-up has whizzed around Hanover and Elm Grove today, digging up weeds, picking up litter and leaving the streets spick and span. 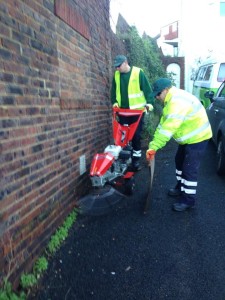 The clear-up was the latest in a series where the council’s refuse staff lend their equipment and expertise to neighbourhoods.

Today’s started near the top of Islingword Road in Hanover and worked its way around the grid.

Cityclean’s East Brighton team leader Mark Walder said that although the area’s narrow streets posed problems for refuse trucks, the area was one of the city’s best kept.

He said: “It seems to be a lot easier to work this area being mainly houses, because flats seem to generate a lot more waste and we have a lot more refuse.

“The communal bins help out in some respects as there’s always somewhere to put your rubbish, and we’ve started emptying them on weekends aswell – although they do tend to attract a lot of fly tipping like builders’ waste.

“Today, we have got our weeding machine and we’ll bet rid of the litter and any excess black bags that we see, as well as jetwashing the pavements.”

Previous clear-ups have taken place in Brunswick & Adelaide and Whitehawk, and Cityclean intends to lend its support to neighbourhoods in every city ward over the coming year.