A busy Brighton cut-through road is closed this morning after a lorry hit some scaffolding at the end of rush hour. 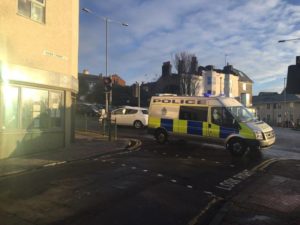 The accident happened in Baker Street, which runs from Ditchling Road to London Road, at about 8.45am.

A spokesman for East Sussex Fire and Rescue said: “We did attend an incident at Baker Street at around 8:45am. A lorry hit some scaffolding.

“Some roads were cordoned off and we left it in the hands of the police at around 9.05am.”

Another central Brighton road was closed last night because of falling masonry.

At 10.40pm, Brighton firefighters were sent to Middle Street, in Brighton, following reports of a dangerous structure, involving fallen masonry from a building, in Middle Street, Brighton.

The area was cordoned off by crews and a full search of the property carried out, using the aerial ladder platform.

Children with overdue library books will have to pay fines