Hundreds of people – including doctors, nurses, other NHS staff and union members – marched through Brighton today (Saturday 21 January) to a protest rally in front of Brighton Station.

The video report below is by local trade union activist Andy Richards.

At the demo the crowd was addressed by Shadow Chancellor John McDonnell who highlighted a range of local NHS concerns and criticised government spending cuts on health. He later opened the new Labour Party offices in Dorset Street, Brighton. 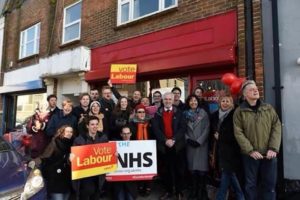 The march – organised by Sussex Defend the NHS and supported by the Brighton, Hove and District Trades Union Council – set off from the Royal Sussex County Hospital at about 11am.

Mr McDonnell led the marchers up North Street and Queen’s Road to Brighton Station. One supporter said that unlike the trains, he arrived there on time. Mr McDonnell said afterwards that he was heartened by the cheers along the way and the number of people who joined the march en route.

At the rally he spoke about the deficit at the Brighton and Sussex University Hospitals NHS Trust, the latest closure of a doctors’ surgery, the Patient Transport Service shambles under Coperforma and the pressures on adult social care.

He said that the only reason health services were still going was because of the fantastic extra work being put in by hospital staff and and other NHS workers from doctors and nurses to drivers, cleaners and support staff. 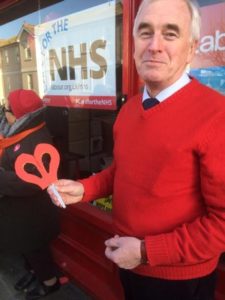 Campaigners also spoke out – criticising in particular the government’s Sustainability and Transformation Plans (STPs) which were renamed the Slash, Trash and Privatise plans.

Janet Sang, from Sussex Defend the NHS, said: “These plans mean nothing but cuts and closures – £860 million is going from our region, hospital beds will be reduced, we are being kept out of hospitals and staff will be cut.

“We are marching today to tell our council to reject these plans before it’s too late and instead insist that our NHS is run properly and funded to do the job that it was intended to do – to provide a universal and comprehensive health service based on need.”

A national demonstration about the NHS is being planned in London for Saturday 4 March.