One in 20 Brightonians signs anti-Trump petition

More people in Brighton Pavilion have signed a petition calling for a ban on a state visit by US President Donald Trump than anywhere else in the country. 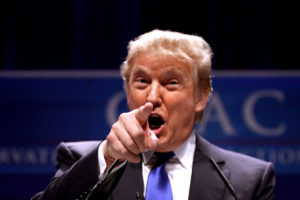 Donald Trump speaking at CPAC 2011 in Washington. By Gage Skidmore from Flickr

As of 10am, 5.5% of people living in the central Brighton constituency had signed the petition demanding that Mr Trump should not be invited to meet the Queen because his “well documented misogyny and vulgarity would cause embarrassment to Her Majesty”.

A protest is also being held today against Mr Trump’s so-called “Muslim ban”, an executive order suspending travel to the US by citizens of seven Muslim-majority countries, at Brighton Town Hall at 6pm. So far, 1,800 have indicated they are going on Facebook – although typically protests attract fewer people than register on Facebook events.

The number of UK citizens signing the petition, which was started yesterday morning, has just tipped 1 million, and is still continuing to rise at a rate of scores of signatures every second.

The number signing in Brighton Pavilion has now reached 6,000 signatures, which 4,000 have signed in neighbouring Hove – 4% of constituents.

Brighton Pavilion MP Caroline Lucas pledged on Twitter last night to do all she could to ensure the petition was debated, which it became eligible for when it reached 100,000 signatures.

Thanks wonderful people of #Brighton – leading the way as ever in standing up to discrimination, hatred & intolerance #MuslimBan https://t.co/uDkFka36Bx

In a letter signed from Green party leaders published in The Guardian today, she said: “It is mortifying that the prime minister was photographed hand in hand on Holocaust Memorial Day (The new special relationship, 28 January) with a US president who, later that day, signed an executive order placing an immediate ban on immigrants from seven Muslim majority countries and all refugees entering the US.

“These measures are a barbaric attack on Muslims in the US, from the countries which are now banned and on all Muslims around the world, stamping upon all principles of liberty and civil rights and undermining the value system on which all our democracies are based.

“As UK Greens we are ashamed that the highest elected official of our country visited the US during this time and then spectacularly failed to take a serious stand against such hatred.

“We call upon our prime minister to condemn the order in the strongest terms. Half-baked statements simply aren’t good enough. All who value human rights must stand up against this alarming act, the rise in hatred it represents and these clear stirrings towards fascism.”

In Brighton Kemptown, which includes the Tory strongholds of Peacehaven and East Saltdean outside the city, almost 3,000 people, or 3% of constituents, have signed.