Varndean school students get down with the kids in the GoatsQuad

Youngsters at a Brighton school are down with the kids – five pygmy goats which they look after in the Varndean GoatsQuad.

Every lunchtime pupils take part in the school’s Goat Club, taking turns to feed and look after Maya, Bertie, Alan, Ethel and William.

With more than 100 youngsters keen to help, the school has had to bring in a rota.

Word of the goats’ popularity has spread – so that yesterday (Friday 3 February) the Varndean goats featured in the TES (Times Educational Supplement).

The TES said: “Hilary Goldsmith, who joined Varndean as director of finance a year ago, brought the goats in after noticing that an enclosed grassed courtyard could do with being grazed.”

The magazine quoted her as saying: “There are definitely students for whom we use goat time as a de-escalation technique and for whom we have noticed a significant change in engagement and behaviour.”

And it said: “While the school is not claiming to have scientific proof that goats improve behaviour, its records do show that behaviour incidents have fallen by 29 per cent compared with the same period (September to January) last year.” 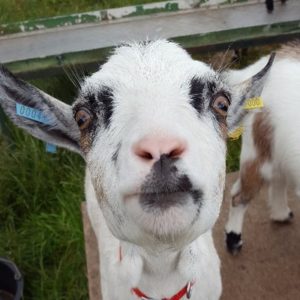 Alan – one of the Varndean goats

Ms Goldsmith said: “As a school we always try to use a restorative approach to dealing with behaviour incidents.

“So you might well find a member of staff taking a student out to the goats’ quad to have a restorative conversation in a neutral environment.”

Four of the goats – Maya, Bertie, Alan and Ethel – were named after the four schools, or houses, within the school: Maya Angelou, Bertrand Russell, Alan Turing and Ethel Ellis. The fifth is named after head teacher William Deighan.

Ms Goldsmith added: “Goats don’t cost a lot to run. We ask parents to donate when they go online to pay for school dinners – and students fundraise through selling rope bracelets and badges.

“At the winter concert, we sold chocolate raisins as ‘goat poo’. We cover the costs through donations and everything else is voluntary.”

And one positive lesson has been that there’s no shortage of students willing to volunteer.