Crowd rallies in Brighton to show solidarity with migrants

A crowd rallied at the Clock Tower in Brighton to show solidarity with migrants last night (Monday 20 February).

They asked people to imagine “one day without us” – one day without the migrants who live, work and study in Britain. Locally they include doctors, dentists and nurses, carers, cabbies and cleaners.

The Brighton gathering was one of several across the country being held on UN World Justice Day as Parliament debated the proposed state visit of the American President Donald Trump.

One of those present, Jane Allen, said that she was supporting valued friends, neighbours and workers: “People from all nations get on living together for a common cause.

“My dentist is Greek. My physio is German. I am not from Brighton. I left Norfolk when I was one year old. Does that mean I should go back to Norfolk?

“I voted against Brexit because I was worried about people who might want to come to the UK.

“It never occurred to me, I never had any doubt that people who have been here for 20 years could be under threat of having to leave.

“I don’t want them to have to leave. I am here today to show how much I value them.” 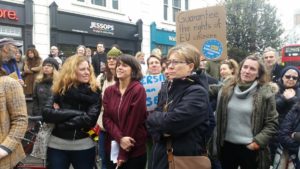 Another of those supporting the event, Jane Matthews, said: “The more people that stand up, the better. Show solidarity. If only everyone came by for 20 minutes. We’re all a bit complacent. It is very easy to ‘sofa shout’.

“I don’t know when multiculturalism became such a dirty word. Cultural diversity should be something we want to bring richness into life. It’s completely bonkers that people don’t want it.

“I challenge you to find me an indigenous Brit. Scaremongering and xenophobia is just all wrong.”

She said that Spanish people had precarious living and working conditions and, because of that, many young people were forced to emigrate.

“I am one of them,” she said. “We come here looking for a job. We do not come here hoping to become rich, stealing from you or taking advantage of your people and country. 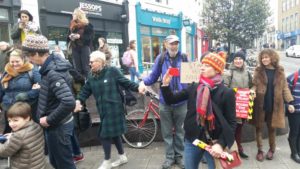 “We just want to live with dignity. In exchange, we offer a lot of things to this country.

“Our hands and bodies to work – most of us are young people, between 20 and 45 years old.

“We are the nurses and doctors that look after you. We are the engineers that design your computers or buildings. We are the waiters and waitresses who serve your drinks and we are the kitchen porters that clean your plates.” 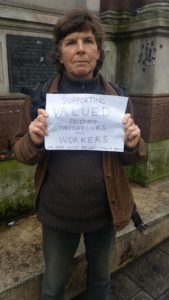 Dorothée Fritze-James, who came to the rally with her daughter, spoke about the impact of Brexit on her family and the dehumanising of EU citizens.

She said: “I have been here since 1979. Now I have no right to be here. I am desperate, depressed. The kids, including my grandchildren, are deeply affected. I can’t sleep.”

She said that she was lucky that she could afford an immigration lawyer to help her apply for UK citizenship.

Many can’t – and she resents the UK using EU citizens as a bargaining chip and ignoring their pleas for clarity and security.

She has had a permit for 33 years giving her indefinite leave to remain in the UK. It may not be enough.

She said: “My daughter, who was 10 months old when my ex-husband and I moved to the UK, must apply for ‘permanent residency’. This is her home here.

“She has children and is married to a UK citizen. One of her children is no longer sleeping because of the anxiety, fearing that she’ll lose her mother.

“My daughter was educated in the UK and has never lived anywhere else.” 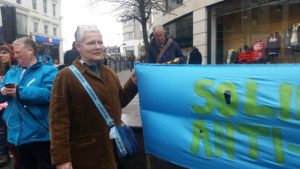 Special needs teacher Angie Parker is a German citizen carrying an EU passport and a Jew but has been a UK taxpayer for 30 years.

She said: “I am going back to Germany because I don’t want to be a pawn in Mrs May’s stupid game. At least Germany is a positive democracy.

“I work in education but it is not enough to stay here. I am sick and tired of being told to pack my bags.”

Councillor Mac Cafferty urged people to promote directly the voice of the vulnerable and to become champions of compassion and concern.

He said: “Ignoring prejudice does not make it go away. The call is to be better than this.”

Yel Karavan, a dancer and physical performer, said that her father was an artist and that she had been travelling since the age of three.

She said: “It is beautiful when cultures learn from each other and open our minds. We all have a heart. We are all human. We are an organism and only when the organism works together, there is life.”

A petition to Parliament about the rules relating to permanent residency has been set up. It has gathered almost 28,000 signatures, including more than 450 from Brighton and Hove. To sign it, click here.