A burger van parked on double yellow lines opposite hundreds of council officials and police officers has prompted a review of traders’ permits.

The Munchbox burger van has a permit to park on double yellow lines in Norton Road, Hove, even though the lines are supposed to be used to prevent dangerous or obstructive parking.

And the site is yards form a zone where mobile traders are not permitted – to protect those businesses that pay rates and rents to fund services for the public.

The opposition Conservatives have asked for a review after different Brighton and Hove City Council departments gave conflicting explanations for the way that the system operated – and apparently appeared to break the law.

The Conservative group leader Geoffrey Theobald said: “This is wrong on so many levels.

“Firstly, the van is parked on a double yellow line all day, all week. If I were to do that, I would quite rightly be ticketed and probably towed away.

“Secondly, it is in direct competition with a whole suite of restaurants and cafés in Church Road, yet unlike these shops, it doesn’t have to pay business rates. That’s not a level playing field.”

Councillor Theobald added: “And all this in full view of the council and police at Hove Town Hall. 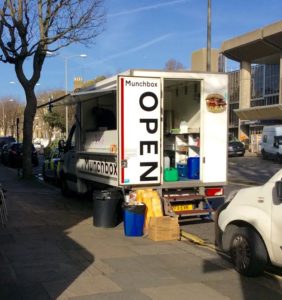 “If this is all above board, as the council seems to be saying, then there must be something seriously wrong with the system of giving out licences – hence our reason for requesting a review.”

At the council’s Licensing Committee, which met at Hove Town Hall yesterday (Thursday 2 March), another Conservative councillor, Lee Wares, said that the permit trading zones were “designed to protect our shopping areas from the impact of mobile traders”.

Councillor Wares said: “Our guidance notes say that mobile traders are not permitted in the town centre but permits can be given in the outskirts of Brighton and Hove.

“A mobile trader parked 10ft the other side of the demarcation line in Church Road is not on the outskirts of the town and flies in the face of the purpose of having zones.

“As was reiterated in the council’s letter to Councillor Wealls (the Conservative ward councillor for Central Hove, Andrew Wealls), the regulation of street trading covers infrequent and itinerant trading.
“Permanently parked in the same place for 12 months is neither infrequent nor itinerant.

“If we accept that our shops and businesses, particularly in the town centre, are crucial for employment, wealth creation and for paying rents and business rates that this city relies on to pay for other services, we must do all we can to protect them.

“Let’s not forget, a mobile trader only pays a fee that can only be used to administer the licence and enforce it. Not one single penny goes towards the cost of running the city.

“I’m clearly not averse to mobile traders and the benefits they bring but only a review will ensure we protect our commerce as our policy intended. 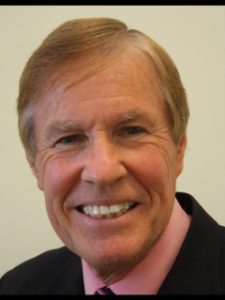 “I suggest that the council can also rely on the Local Government (Miscellaneous Provisions) Act 1976 that states the council may refuse an application on the grounds that ‘there are already enough traders trading in the street from shops or otherwise in the goods in which the applicant desires to trade’.

“Last time I looked, we were already quite well blessed with food outlets in Church Road and George Street.

“We prohibit street trading within a one-mile radius of the Amex football stadium. That sounds like a buffer zone to me.

“We have also got another perverse situation outside this building where quasi permanent traders are positioned on double yellow lines.

“The council’s website says that ‘yellow lines mean that you cannot park as it is dangerous or you would be causing an obstruction to oncoming traffic or pedestrians’.

“Either the necessity for double yellow lines exists or it doesn’t. If it doesn’t, we should get rid of them. If it does, don’t permit mobile traders to park on them.

“Perhaps somebody can square this circle for me.

“During the day, the busiest time for traffic and pedestrians, a mobile trader is parked on double yellow lines, immune from prosecution because of the traders’ licence.

“When they’ve gone and the streets are quieter, if I park on the same double yellow lines, I would get a ticket.”

He urged fellow members of the Licensing Committee to extend the zone for traders’ permits “to properly protect our town centre and ensure traders cannot break any road traffic regulation by virtue of having a traders’ permit”.

Labour councillor Adrian Morris raised concerns about itinerant traders in places like Western Road. He said: “They spoil the street scene and if I had a business there, I’d be furious, and I think we need to crack down on it.”

Conservative councillor Steve Bell spoke about the way some mobile traders put out tables and chairs. He was told that required a separate licence.

He added: “It does seem odd that outside Hove Town Hall, where we administer policies, and outside Hove Police Station a van can park on double yellow lines yet if I was to park there I could expect a ticket.”

The cross-party committee asked for a review of the council’s street trading policy. It called for options to change the restricted zones and prevent or restrict traders from pitching on yellow lines or otherwise breaking traffic or parking laws.