Police are appealing for witnesses after a man was robbed by a suspect in St George’s Terrace, Brighton. 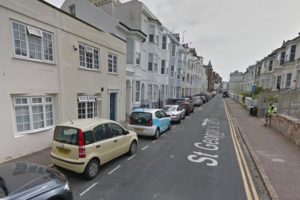 The 22-year-old victim was approached just after 12.35am on Thursday 23 February by a man who produced a weapon which the victim described as a gun. He demanded his phone and money. The victim handed it over and the suspect made off towards Upper Bedford Street.

He is white, 6ft, skinny and was wearing black trousers, a black zip up jacket, a black beanie hat and had part of his face covered.

The victim’s mobile phone was later found in Marine Gardens and handed into the Hand in Hand pub.

Detective Constable Tom Duffy said: “We would like to speak to the person who found the victim’s phone along with any witnesses who may have seen the robbery.”

Anyone with information please report online https://sussex.police.uk/contact-us/response-to-appeal/ quoting serial 19 of 23/02 or email 101@sussex.pnn.police.uk