Seafront traders fear they could go under if paving works overrun

Seafront business have been venting their frustrations this week at how seafront building work – or the lack of it – is hurting their trade. 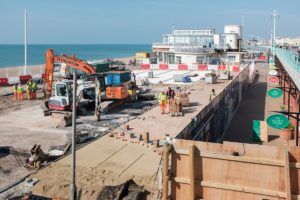 To the west, traders in the new West Pier Arches say they fear that work to repave the area outside their premises with near-identical bricks to match the i360 landscaping will overrun into the Easter holidays, costing them thousands of pounds in lost business.

And to the east, Concorde 2 has made an angry comparison between the money spent on the area around the i360 and the current state of the seafront east of the Palace Pier.

One of the West Pier arches traders, photographer Finn Hopson, has already been told the work is not going to be finished by the original deadline of April 3, and says he fears it will not be done by Easter.

He said: “We have no confidence at all that it will be complete by Easter. Nor do the council.

“This all started with their original plan last year to close us down completely so they could swap one type of paving block for an almost identical paving block outside.

“We agreed that they would complete one half of the area outside followed by the other to leave us with reasonable access for public/customers. Most of that plan was ignored from day one on Jan 3 and we’ve been behind a much bigger building site than we agreed ever since.

“The council got in touch yesterday to say that although the majority will be done by the 13th (the day before Good Friday and already two weeks longer than planned) there would still be some fenced off areas, some incomplete things and some restricted access for public, particularly around the staircase to the i360.

“We still don’t have a firm date for the final completion of everything, it seems likely to be just after the Easter holidays finish, which is the wort possible outcome for all of us.

“The original council statements about this project talked about the scheme supporting the traders and making things better, so far it has been the most detrimental thing we’ve experienced and without Easter we can’t really recoup the losses.

“I keep remembering that originally the was all due for completion by tomorrow, but as i write this I have two guys slicing up bricks outside and a huge crane lifting things around a mostly unpaved site.

“The bottom line is that there are nine small businesses who have already endured two+ years of i360 construction, followed by three months of no income (footfall has been reduced almost to zero for me) and we’re all considering whether its really possible to continue.

“If the project leaves us closed off for the holiday period we will all lose a huge amount of money. It seems rather unfair to expect the smallest businesses on the beach to foot the bill for a mismanaged council project.”

£36m secured borrowed funding by @BrightonHoveCC for a faulty isore whilst the whole of the East #Brighton side of seafront looks like this! pic.twitter.com/gRbP1CaY0G

Council leader Warren Morgan and chief executive Geoff Raw went to the seafront office this morning to speak to staff and discuss ways of improving the appearance of the eastern side of the seafront.

A council spokesman said: “The original target of finishing the landscaping by April 3 has slipped because of bad weather – an unavoidable hazard of working on a seafront at this time of year. We now hope to get all or most of that newly-landscaped area open by Easter – particularly the bit near the traders.

“We’re sorry for the inconvenience but we’re trying to implement the investment and improvements traders and residents want – and that inevitably involves some disruption.

“As a council we’re trying to encourage the message that despite the works, people should still come to Brighton and the seafront as there’s still a great time to be had.

“We still await news of our Coastal Communities Fund bid for Madeira Terraces funding – but we made the strongest possible case we could to the government last year.”