Former council leader Mary Mears has hit back in the political row over funding to restore the Madeira Terraces on Brighton seafront.

Councillor Mears said that Brighton and Hove City Council’s bid ignored key criteria set out as part of the application process for money from the Coastal Communities Fund.

She responded after the current council leader Warren Morgan said on Monday (3 April): “I cannot understand why the government has let us down so badly.

Mr Kirby said that he was surprised by the criticism as Councillor Morgan had not contacted him about the Madeira Terraces bid or asked for his support.

But the Conservative MP for Brighton Kemptown said that on Monday he wrote to the Communities and Local Government Secretary Sajid Javid about the failed bid. 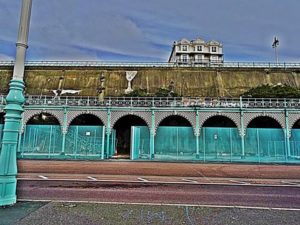 Mr Javid said in his reply to Mr Kirby: “Competition for funding was extremely high and we were only able to support those bids that aligned with the programme’s stated outcomes and criteria.

“Sadly, Brighton and Hove City Council failed to meet the planning requirements of the fund.

“Significant design work has yet to take place, a planning submission has not yet been submitted, match funding has not yet been secured and building work is not expected to start before January 2019 at the earliest.”

Mr Javid also said: “I recognise that this decision is disappointing to the council, given their, entirely welcome, ambition to restore this grade II listed seafront arcade to bring it back into productive commercial and leisure use.”

And he added: “If the council can address these practical concerns about the deliverability of their project, they may wish to consider reapplying to the fund in a future bidding round.”

Councillor Mears, who led a Conservative council in Brighton and Hove from 2008 to 2011, criticised her Labour successor.

She said: “The present leader of the city council, Councillor Warren Morgan, stated ‘the government has let us down badly’ as the funding bid to launch a project to restore Madeira Terraces fails.

“As a former leader of the council, in my view, Councillor Morgan has misled local people, let the city of Brighton and Hove down and is now trying to pass the blame.

“The leader of the council has also stated he is ‘bitterly disappointed’ and criticised the government along with Kemptown MP, Simon Kirby.

“What he has completely failed to mention is that the fault lies solely with Councillor Morgan and the council.

“This is confirmed by the letter from the Secretary of State for Communities and Local Government to Simon Kirby MP.

“The letter confirms the city council’s bid for arches money was found lacking in many areas.

“Simon has said previously, after reading Councillor Morgan’s quote in the local press, that he was surprised the leader of the council had not discussed the bid with him.

“And as Simon rightly points out, he could have worked with Councillor Morgan on the application, instead of keeping him, Simon, in the dark.

“In the light of these new facts, perhaps Councillor Morgan would like to apologise to the city and admit the blame – and the responsibility – is his.”

Today Councillor Morgan wrote to Councillor Mears: “I’m sorry that you feel the need to criticise officers publicly for the bid that they put together within the extremely short timescales that your government allowed us to bid for this limited sum of money.

“Our bid was approved at Stage 1 and in subsequent discussions none of the conditions stated by Sajid Javid were raised as potential obstacles.

“I’m happy to ask officers to circulate documents relating to our bid to show that it was thorough and sound.

“The council bid made in June 2016 successfully made it through to Stage 2, where it was made clear that prior planning approval was not expected.

“A Stage 2 submission made in December 2016 also made this clear but further invitations were made by the Big Lottery Fund to submit further information which was supplied in two stages in January 2017.

“The council has waited since January 2017 for news of the bid and only at this point, this week, has any indication been given of any non-qualification.

“Ongoing conversations and correspondence were held with Big Lottery which did not indicate that a lack of a planning permission would indicate exclusion from the process.

“The council has a good track record of bidding for government funds and most recently achieved £12 million for the Waterfront project among others.

“It is often the case that government funding bodies wish to see funds expended quickly. Putting together a complex project such as Madeira Terraces restoration is a time and cost-intensive exercise that requires resources that are simply not available to the council without some external funding support.

“CCF funds are intended to help kick-start regeneration in coastal towns and the project clearly meets this criteria.

“It would therefore appear to me that to protect Simon Kirby from embarrassment, the Secretary of State is moving the goalposts after the final whistle so that this own goal by your side is disallowed.

“I would like to take the opportunity you have afforded me to ask what steps you and your administration took to survey, repair and maintain the Madeira Terraces during your four-year period in office prior to your defeat in 2011 as very many residents are asking me why the arches were allowed to fall into such a state of disrepair that this extensive and costly work is now urgently required.”