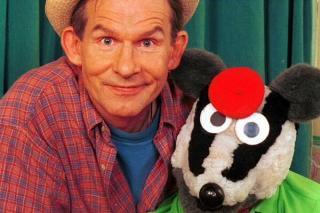 Andy as Bodger, with Badger

Mr Cunningham, who also played several uncredited roles in Star Wars: Return Of The Jedi, including Jabba the Hut’s bodyguard Ephant Mon, had reportedly been suffering from cancer.

His younger sister Tessa told Press Association: “”He had a quicksilver brain, a rebellious attitude, boundless compassion particularly for the underdog, unstinting levels of generosity and, of course, a passion for mashed potato.”

He is most famous for Bodger and Badger, which aired on the BBC between 1989 and 1999, which featured lots of mashed potato, Badger’s favourite food.

Brighton politician Nancy Platts shared a memory of Andy entertaining children at a community event in Hanover. She said: “I am so sorry to hear that Andy Cunningham has died.

“I met him when I went along to help at a family fun day in Hanover Community Association. He threw his heart and soul into entertaining the children, helped along by Bodger making buckets of mashed potato.

“As the show went on, the potato mashing got ever more frantic and you could feel the kids’ excitement mounting ahead of the finale when Bodger sent mashed potato flying around the room.

“It went over the floor, on our clothes and we even had to pick it out of our hair. The children thought it was hilarious. He will be missed.”