The Greens won Brighton Pavilion with Caroline Lucas gaining a bigger majority again despite spending much of her campaign supporting colleagues in other target seats. 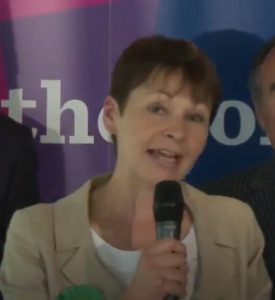 He was sitting his final exams at Sussex University where he has been studying for a degree in politics while trying to put together his second general election campaign as a candidate.

They were trailed by Independent candidate Nick Yeomans, with 376 votes, more than twice his tally of 116 votes at the May 2015 general election.

The Liberal Democrats stood aside in the seat to give the Greens a better chance of success as part of what has been described as a progressive alliance.

The result was the last to be declared at the American Express Community Stadium – the Falmer home of Brighton and Hove Albion – as breakfast-time approached this morning (Friday 9 June).

In her acceptance speech Caroline Lucas said: “I’m proud that we’ve pushed the boundaries of the politically possible.” 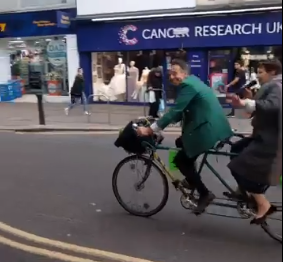 On polling day (Thursday 8 June) she was spotted in the centre of Brighton on the back of a tandem – with her husband Richard Savage – urging people to vote for her.

With her wireless microphone, the sight was reminiscent of candidates’ cars trawling the streets with loudhailers or roof-mounted speakers in the 1970s.  But more green, of course.