A builder has admitted leaving a father of three from Hove for dead after a hit and run in Kemp Town. 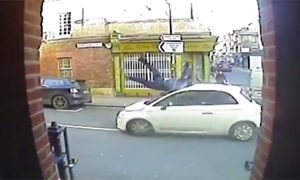 He was behind the wheel of his girlfriend’s Fiat 500 when he smashed into Andy Payne, then 53, in Montague Place, Brighton.

McDermott drove off without stopping but the horrific crash was caught on CCTV and posted on YouTube as Sussex Police tried to trace the driver.

Miraculously Mr Payne survived and, Sussex Police said today (Tuesday 3 October), has since made a recovery.

The force said: “Three people have pleaded guilty to their part in a hit and run in Brighton in January last year.

“Adam McDermott has pleaded guilty to causing serious injury by dangerous driving, conspiring with Clark Walker to pervert the course of justice, fail to stop at an injury road traffic collision, no insurance and no licence.

“Robyn Burns, 30, unemployed, of South Coast Road, Peacehaven, pleaded guilty to conspiring with Adam McDermott to pervert the cause of justice.

“Clark Walker, 32, unemployed, of Ditchling Rise, Brighton, had previously pleaded guilty to perverting the course of justice with Adam McDermott.

“McDermott and Burns, a couple, were due to stand trial at Lewes Crown Court but pleaded guilty on Tuesday 3 October.

“At 3.40pm on Thursday 14 January 2016, emergency services were called to a serious collision in the Kemp Town area of Brighton.

“A 53-year-old man had been hit by a Fiat 500 as he crossed Montague Place from St George’s Terrace.

“The victim, Andy Payne, was rushed to hospital has since made a recovery.”

Sergeant Dan Pitcher said: “We have worked extremely hard as a team to bring these three to justice for the Payne family.

“How Andy is still alive and has no major long-lasting physical damage is a miracle.

“McDermott’s actions that day were awful. He drove without regard for anyone’s life and when he did hit Mr Payne he didn’t even stop.

“He would have known how hard he hit him and he didn’t even brake. For all he knew Mr Payne was dead.

“Thankfully this investigation has not been into Mr Payne’s death. This only comes down to luck.

“Burns and Walker conspired with McDermott to cover up his actions and claim the car had been stolen.

“Burns has already been charged and sentenced for insurance fraud for the car, having been given 80 hours community service.

“She now faces a much more severe punishment for perverting the course of justice.”

All three are due to be sentenced on Friday 17 November.