Pussy Riot – clever, enthralling and not a guitar in sight

“Please be as punk as possible,” show producer Alexander Cheparukhin politely requested as he introduced Pussy Riot in the first of two sell-out Brighton shows. 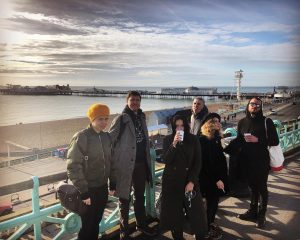 But actually an hour of pogoing or crowd-surfing wasn’t really possible as the audience was gradually drawn in and enthralled by the tale of the Russian rebels jailed by the Putin regime.

Only one of the three women imprisoned for their 40-second gig in a Russian Orthodox Church in 2012 was performing at The Haunt, just off Brighton seafront.

Masha Alyokhina enlisted two musicians – a sax player and an electronics/keyboard player – to the cause, and a Belarus Free Theatre actor Kyril Masheka to recount the tale.

She and Masheka narrated the Pussy Riot trio’s tale in Russian as an accompanying film bearing English subtitles told the tale of the women jailed for their subversion on “sacred” church territory.

Some danced to it, most read the subtitles intently and enjoyed the discordant, occasionally funky soundtrack as Masha and Kyril told the story.

Masha was sentenced to two years’ jail for her 40-second performance in Moscow before being released early from her sentence ahead of the 2014 Winter Olympics in Sochi.

And she’s still angry. The punkiest part of the show was when the Masha and Kyril emptied about 16 bottles of 500ml water over the crowd – for no obvious reason – making me very glad I didn’t park my parka in the cloakroom.

A cleverly thought-through show, the story never flagged, the visuals were always arresting and the music – not a guitar in sight – enhanced the spoken tale of fearless women driven to distraction by their government.

It went down a storm, so well perhaps that Alyokhina, perhaps shocked, looked visibly moved by the reception.