A pedestrian has been seriously injured after stepping out in front of a bus by St Peter’s Church this lunchtime. 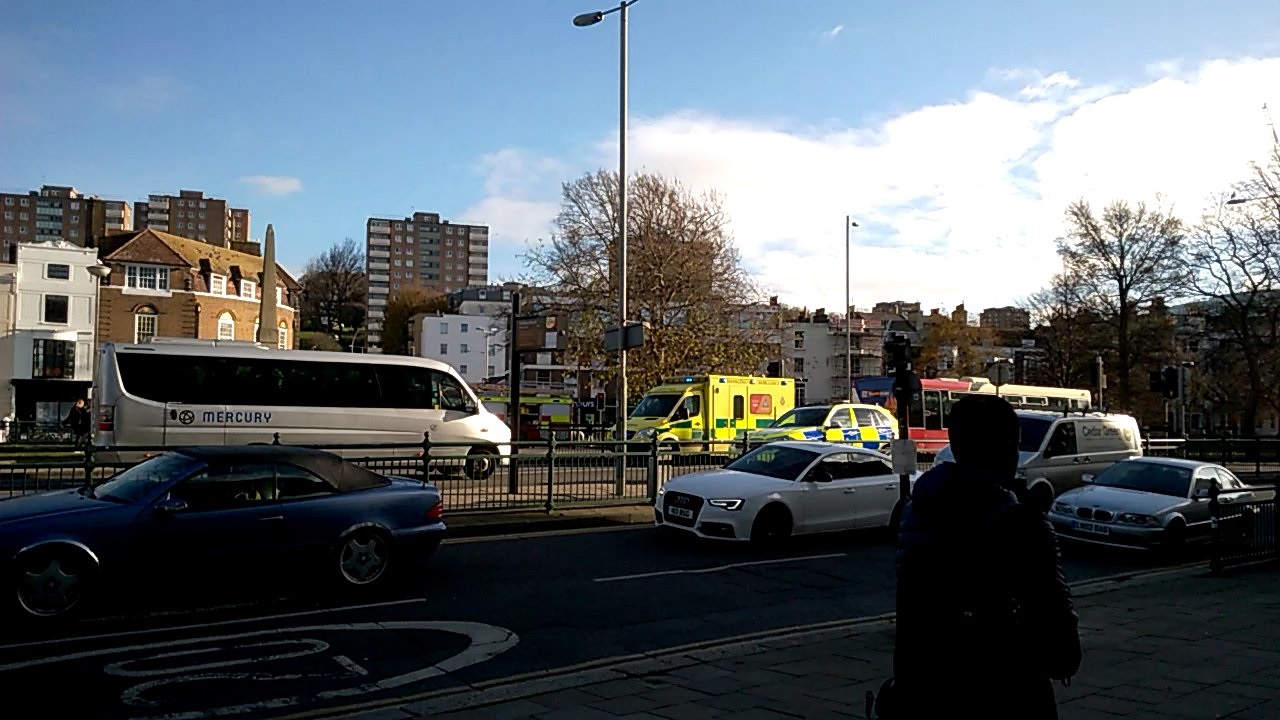 The man was treated at the scene before being taken to the Royal Sussex County Hospital.

Roads were closed and traffic diverted along London Road as emergency services work at the scene.

Brighton and Hove Buses Managing Director Martin Harris said: “We regret to report a pedestrian stepped out in front of a bus earlier today and was hit. He’s been taken to hospital where we understand he is being treated for a serious injury.

“The accident happened at the bottom of Lewes Road on the St Peter’s Church bus lane in the direction of the Old Steine.

“Our thoughts are with the pedestrian. We dearly hope he makes a full recovery. We’re staying in close contact with the hospital so we know how he’s doing. We’re also taking care of our driver who was badly shaken by the incident.

“CCTV footage shows the pedestrian was – sadly – looking the other way when he stepped off the kerb and into the road. Our driver was driving at less than 15 miles per hour as he was moving towards the traffic lights and, though they were on green, he was alert to them changing and braked immediately.

“No passengers were hurt. Disabled passengers were helped off the bus and escorted to the London Road bus stop they required by our Accessibility Officer – who called ahead to the service they wanted to alert the driver they were waiting.”

⚠ ❗ Due to an incident at St Peter's Church, northbound buses are using the main carriageway – St George's Place/York Place. Southbound services are unaffected! ⚠

A spokesman for South East Coast Ambulance Service said: “We were called at approximately 12.40pm today to reports a pedestrian had been hit by a bus on York Place, near St Peter’s Church, Brighton.

“Ambulance crews in two ambulances and two cars attended the scene. A man was treated at the scene for serious injuries before being taken to Royal Sussex County Hospital.”

A police spokeswoman said: “Emergency services were called to York Place, Brighton at 12.43pm on Thursday (November 30) to a collision between a pedestrian and a bus.

“The road has been closed while emergency services are on scene. The pedestrian is believed to be in a serious condition.”

The fire service said they assisted on the scene until 1.07pm.

The accident happened a couple of hundred metres away from where a six-year-old girl was left with potentially life-changing injuries to one of her feet after being hit by a coach as she crossed Marlborough Place by the Mazda Fountain in June this year.

The police investigation concluded last month with a recommendation for no further action.