As a city where visitors and tourism are a key part of our economy, we have always known that sunny bank holidays are a major boost.

However, we are also a city where residents want to enjoy the best that the city has to offer too.

So we should never be surprised when our beaches are full, our cafés and bars bustling and suddenly everybody wants to enjoy the good life by the sea.

But such large influxes of visitors bring their own problems. We all know that traffic on sunny weekends can become not just a problem in the city but that queues can sometimes extend far north of the Downs.

Similarly not all visitors have the same level of love and respect for our city that we all share. But then not taking care of our city can sometimes be our own failing too.

That’s why I was pleased to see over the recent bank holiday weekend that staff from our seafront team, Cityparks, Cityclean and a wide range of services were working hard to make sure residents and visitors alike could enjoy the city’s attractions.

Unfortunately beaches it appears do not keep themselves clean, nor do parks, or even our streets.

But while visiting beaches and parks over the weekend, I could see crews at work making sure that the mess that people had left behind was efficiently cleared up, so it wouldn’t spoil things for the rest of us.

Bins were regularly emptied, and for the most part the city was looking great considering the sheer number of visitors to the seaside.

However, there are some things that even the council cannot plan for. On Monday evening the vast majority of the beach was clear from rubbish but in patches you could see where less community-minded visitors had decided that the best place for empty chip containers was on the shingle – not in the bin a few yards away.

And when people did manage to struggle to one of the many bins, they would rather try to ram their waste into a full bin than use the empty bin five yards away. 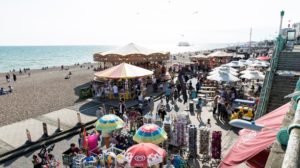 As a council we are committed to working hard to keep the whole city free from mess and rubbish. We want the city to be a clean place to visit and to live in. But everyone needs to play their part.

We want a city tourism offer and economy that works for the many, not the few. Where the benefits of living in a city by the sea can be enjoyed by all and not spoiled or reduced by the actions of a small minority who care more about their own enjoyment than the impact of their waste ending up in the beaks or bellies of our wildlife.

To the few who left the city a bit dirtier I say – please try harder next time.

Councillor Daniel Yates is the Labour leader of Brighton and Hove City Council.