Home delivery? A bit too close for comfort in one Brighton street 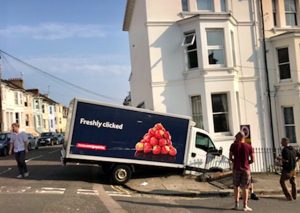 The driver was not thought to have been at the wheel of the Tesco lorry when it rolled down the hill and crashed into a building the corner of Vere Road.

The accident, at about 6pm, was just a few blocks up from the Signalman pub near London Road station.

A crew from East Sussex Fire and Rescue Service turned out within minutes and later a recovery crew took the lorry away at about 10pm. 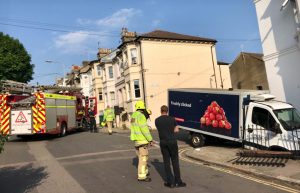 Firefighters were called to the crash in Ditchling Rise 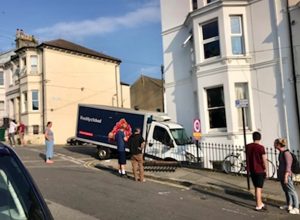 No one was hurt was hurt in the accident which attracted a crowd of onloookers.

But the railings at the property were damaged as the lorry came to rest against the basement wall.

Tesco is understood to have accepted liability and offered to help rectify the damage promptly.