Thousands of London to Brighton charity cyclists ride into town

Thousands of cyclists are pouring on to the seafront at the end of the annual London to Brighton bike ride. 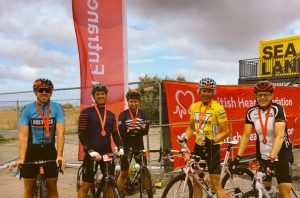 They are taking part in the 54-mile charity fundraiser, having started at Clapham Common at 6am today (Sunday 17 June).

The event is the biggest of its type run by the British Heart Foundation.

A covering of cloud and gusty winds have kept the temperatures down compared with some years.

But that didn’t prevent the first five riders from crossing the finish line in Madeira Drive by 9.15am.

The organisers, as always, emphasise that it isn’t a race although unsurprisingly many of those taking part are keen to challenge themselves.

As has become tradition, a fleet of lorries has been laid in to transport bikes back to London from the seafront for anyone down from London who can’t face riding home.

And as has become tradition, the railways and train companies are turning away anyone with a bike – despite a new fleet of Thameslink trains with freight wagon style interiors.

The road from St Peter’s Church to the seafront and Madeira Drive will remain closed to all traffic except bikes all day. 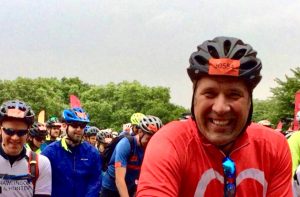 Among those taking part this year are the footballer and former Arsenal and England goalkeeper David Seaman, making his London to Brighton debut.