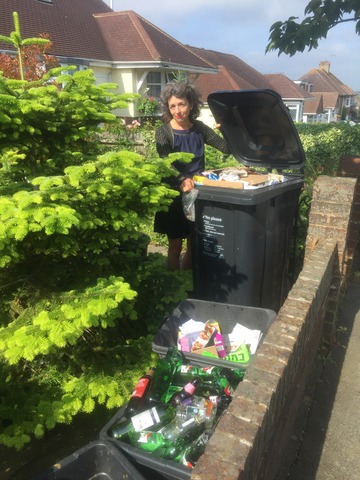 A woman’s recycling has finally been picked up after two months with no collection – and more than a week after her plight hit the headlines.

It was last collected from her home in Larkfield Way, in Hollingbury, on Thursday 19 April. When it was missed two weeks later she made her first complaint, and another when it was missed again a fortnight later.

When she contacted the press in early June, a council spokesman promised that the cardboard, bottles and cans would be collected within 24 hours.

Nine days later it was still there, having been ignored once again by refuse and recycling workers.

Mrs Turner qualifies for an assisted collection as osteoporosis puts her at risk of a fracture. Her recycling bin and boxes are next to a low wall in front of her house.

She said: “It is not in a difficult place. They don’t have to take it back for me.”

She said: “I’m quite distressed about my recycling situation because it is over eight weeks since it was collected.

“I’m repeatedly reporting it as missing.”

What she finds particularly frustrating is how her recycling is visible from the road but ignored.

After hearing how Mrs Turner repeatedly reports the issue, and how she was assured her recycling would be collected within 24 hours, he was astonished.

He said: “What is it that residents need to do for Cityclean to respond to complaints?

“This is a basic service that the Labour administration are failing to deliver despite saying they’re going to deliver.”

He said one possible reason the recycling was not being picked up was because missed refuse collections across the city mean a lot of recycling is now being picked up by relief teams, who might not know Mrs Turner needed help.

A Brighton and Hove City Council spokesman said: “We have visited Mrs Turner to remove her recycling and apologise for the problems she has experienced.

“We have reinstated her assisted collection request and are confident that there will be no further problems.”