Lottery bosses have turned down a £4.2 million bid for funds to help restore the Madeira Terraces on Brighton seafront. 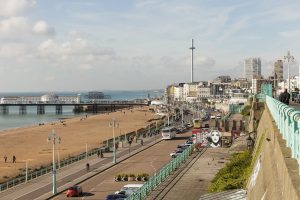 Brighton and Hove City Council is asking for an urgent meeting with the Heritage Lottery Fund with a view to resubmitting its bid next month.

In the meantime the council intends to keep working towards the restoration of the first three arches using money raised by crowdfunding last year.

Fundraising has continued and this week a second raffle in support of the Terraces, organised by community campaigner Jax Atkins, added a further £9,000.

The council said: “The demand for Heritage Lottery Fund funding is highly competitive and this has been compounded by recent cuts to HLF’s annual budget which have been reduced by around 50 per cent from £380 million to £190 million.

“It’s not unusual for a project to be unsuccessful first time around. HLF has stated that the project was a very strong project and a perfect fit for the Enterprise Grant.

“Unfortunately as they had to take decisions on far more projects than the available budget would allow, our application was rejected due to insufficient funds and not for any other reason.”

The Heritage Lottery Fund has supported a number of other projects in Brighton and Hove in recent years. Substantial sums have gone to

The council said: “Decision makers noted the great heritage value of Madeira Terrace, and recognised Yuven more support. We recognise there is more competition than ever out there and funds are dwindling.

“Lots of very successful and important conservation projects have not got there first time but they happened. And few are more important than this.”

Raffle organiser Jax Atkins said: “It’s disappointing that HLF haven’t chosen to help with the terraces yet but we’re not giving up.

“There is such strong feeling in the community and so many people are determined to get the project under way. We will not be waiting around.

“Our midsummer raffle on Saturday raised £9,000 and I’d like to thank everyone who bought tickets and donated prizes – we had over 800 in the end.

“Every penny we raise sends a clear message to the council and to funding bodies that the people of Brighton are serious about saving Madeira Terrace so we can once again be proud of our beautiful heritage and the shop window of our city.”

The council added: “Next steps for the Madeira Terrace project include appointing a design team and obtaining planning and listed building consent.

“Work on the first three arches is expected to start towards the end of the year.”