Stay of execution for Same Sky and Annexe artists 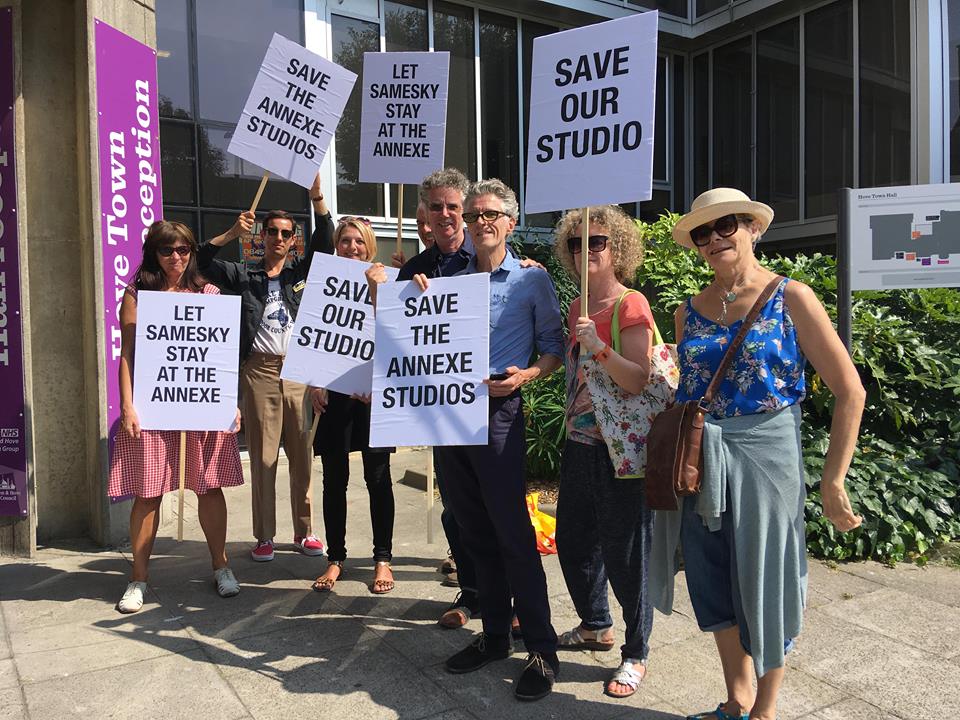 Artists working in Belmont Street may get to stay in the building if Brighton and Hove City Council members are persuaded of its social value.

Designers and creatives based in the building staged a protest outside Hove Town Hall before a meeting of the council’s Policy, Resources and Growth Committee this afternoon (Thursday 12 July).

Green councillor David Gibson asked for a report into the social value and impact of moving the artists, including community arts charity and Children’s Parade organiser Same Sky, into New England House.

This was seconded by his fellow Green, Councillor Phélim Mac Cafferty, and supported by Labour members.

The council wants to sell off the property at 43 Belmont Street, known as the Annexe Studios, to invest in a better performing rental property.

Tenants want to buy it at above the market rate, but the owner of the neighbouring building in Cheapside has put in a higher offer to redevelop the site as flats.

Councillor Gibson said: “Given the clear synergy with lots of creative people in a shared building with coffee rooms and shared space that would be a significant loss.

“Same Sky is a fantastic organisation with social value. I am concerned they may be driven away from central Brighton or Brighton as a whole.”

Before the meeting, designer David O’Connor wrote to councillors reminding them of the  work carried out by Same Sky as well as the importance of the creative industries to the city.

He has put forward a bid to buy the building but was frustrated he could not speak to the committee.

In his email he wrote: “We are very concerned that the alternative suggestion for our relocation to New England House will be much more expensive than our current space and that that the creative community who make up the annexe will be dispersed and fragmented.

“Many will not be able to afford the new spaces. By making a commercial bid for the building, we believe our bid has commercial integrity.

“The social value of the Annexe is very high given Same Sky’s highly regarded work.”

Councillors of all parties voted unanimously to delay their decision for a social impact report.