Recent days have seen the news emerge that Momentum is attempting to deselect all existing Labour councillors in Brighton and Hove, with the exception of one.

Of course this comes as little surprise, following, as it does, the vicious attacks against the previous council leader and the partially successful campaign of harassment and intimidation mounted against incumbents to discourage them from standing for re-election.

I signed myself up to get updates from Momentum in the city and as a consequence got to see a little of their operation ahead of the Preston Park shortlisting meeting held on Tuesday 17 July.

I received an email and texts urging me to vote against automatically reselecting the ward’s one sitting councillor and to shortlist the Momentum slate.

I am not completely innocent. I know there have always been slates. But as a pluralist and as someone who believes in treating my comrades with enough intelligence and sophistication to make their own minds up, I have always seen slates as divisive, and a tool for political control — the enemy of the consensus and inclusivity that I cherish.

Like tens of thousands of others down the years I’ve invariably voted across the left-right spectrum, according to the views, ability and character of candidates and a strong belief that a broad balanced ticket delivers the mix of idealism and pragmatism that’s most likely to get us over the line and ensure we use office effectively.

But while there’s nothing to stop me continuing to vote as I have always done, it’s now obvious that in the current period in this city I have no chance of seeing an outcome that reflects my preference for pluralism and balance — or indeed the experience of sitting councillors.

Momentum is the only organisation within the party locally with a slate and organisation. They have burnt the broad church to the ground and now have a clear run. Crucially they are able to continue to ride the Corbyn wave and mobilise activists around a crude proposition that their people are for the first ever socialist council and everyone else is against.

There is no opposition or counterpoint.  And apart from anything else, this ignores the fact that there was a successful majority Labour council in Brighton and Hove between 1997 and 2003  and Labour majorities on the earlier councils that subsequently merged to become the current authority.

Unfortunately this is isn’t just a disaster for my own sensibilities. It’s also grim for the whole party in Brighton and Hove because it shifts power from transparent, democratic, party structures and ordinary members to the opaque, closed off world of a separate organisation. 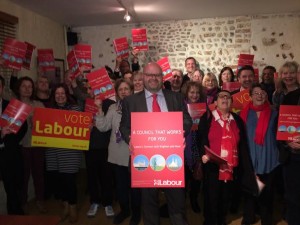 Although nationally and in other parts of the country Momentum might be said to have contributed to some positive campaigns, in this city it is, in effect, an organisation dedicated to taking over control of the Labour party and council.

This sorry state of affairs casts a shadow over the integrity of party structures. How will ordinary members be able to hold councillors to account if they even partly owe their selection (and reselection in later years) and thus their allegiance to a separate shadowy organisation — one that includes non-Labour members?

And how will party members be able to engage in meaningful debate about the choices and challenges we face, on everything from Brexit to the local government manifesto, when the real decisions are taken and the votes marshalled elsewhere.

The massive irony in all of this is that we supposedly operate at a moment when party democracy is at its apogee. And while I do not doubt the idealism and democratic intent of all of the approximately 1 in 10 party members who have joined Momentum across the country, I would expect them to ask themselves how they justify the power grab to the 9 in 10 who are not members.

The new members I spoke to at the Preston Park shortlisting meeting were bewildered to say the least when learning of the slate. Put simply, the party at constituency level requires a level playing field. None of this Orwellian  “some members are more equal than others”.

Worst of all is that the current state of affairs gives an open goal to our political opponents. Who, they may well ask, is really pulling the strings? What’s more in the run up, potentially, to a close general election our council will be in the spotlight.

Do we really think the current state of affairs reflects well on Labour? Shouldn’t all party members be worried that we are beginning to stink of the fumes coming from the current Brighton and Hove Momentum chief’s gaslight?

David Arnold is a Labour Party member and previously agent to Nancy Platts and party organiser.