What I said to Sussex University students on graduation day

Sometimes things happen that make you stop for a moment and think. I’ve just had one of those moments.

I had to apply three times to Sussex University before they accepted me as a student. Yesterday, 14 years after I graduated, I got to address their graduation as guest of honour. 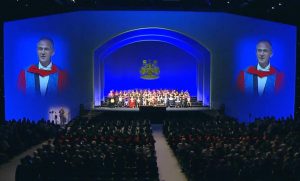 I’ve attended graduations at both Sussex and Brighton Universities in the last year. I find them so emotional. Students of all ages, from all backgrounds, celebrating their own achievements, discovering what they can achieve, and sharing that achievement with family who are whooping with joy from the audience.

Sitting on the stage I get to hear what students say to the Chancellor when they get their degree. Often it’s really funny, joyous. But I don’t mind admitting that my eyes filled with tears when a very shy student came on to stage, put his arms around the Chancellor and just said: “I’m so happy.”

The power of education is not lost on me. The chance to speak to students yesterday was something I’d been looking forward to, and nervous about, for ages. There was a lot I wanted to say to them at such an important moment in their lives.

So, for those of you who have five mins to spare, here’s what I said in my address.

Once again, thank you from the bottom of my heart for allowing me to do this, University of Sussex, and congratulations to every student who graduated this week.

Chancellor, it is a true privilege to be standing here with you today.

Fourteen years ago I was sitting where you are, graduating with a Sussex degree for the second time.

I remember looking at this stage, full, as it is today, with successful people.

People who have made it to the top of academia, entertainment and journalism. Or in my case getting elected to the House of Commons.

And of course once someone succeeds, it seems logical, inevitable even. 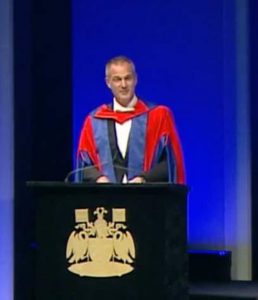 But if, rather than looking at us, you could see the world through our eyes, you would see something very different.

Because my simple message to you on this great and wonderful day that marks the start of the next chapter in your lives, is this:

There is nothing inevitable about success.

Take my life, for example.

There are countless moments where the pathway to me being here with you today was so blocked, barricaded and littered with challenges that I simply wasn’t able to see a way forward.

I went to a comprehensive school down the road in Bognor Regis.

It was a very well-meaning school but not geared-up for someone like me. This was the 1980s. 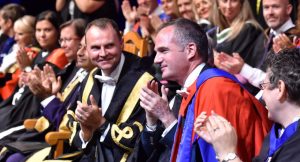 I am acutely dyslexic with a reading and writing age of just 8 years and 3 months.

I only found this out later in life but at the time the school didn’t recognise dyslexia as a condition.

So I was sent off to a quack therapist in London who made me wear a wooden contraption on my head every night after school.

I was put into what was called “remedial”, taken out of class and sat in a room where I drew weird shapes for hours on end.

And there was something else too.

Back then government had passed a law that banned schools from talking about same-sex relationships on equal terms as straight relationships. The law was called “Section 28”.

I remember very well an English teacher, mid-way through class, stopping to point out that the relationship being described in our books was not a “natural” one. 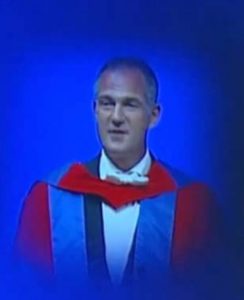 I’m very proud stand before you as a gay man.

And I’m pleased to report that I’ve had some very lovely – and entirely natural – relationships in my time!

But back then I was confused, scared and angry.

It’s fair to say that the system wasn’t on my side!

So I ended up leaving school without any usable qualifications but set my heart on getting a job at the Body Shop’s head office close to where I lived.

So one day when I arrived in their reception, I sat there the entire day until somebody took pity and gave me an interview. 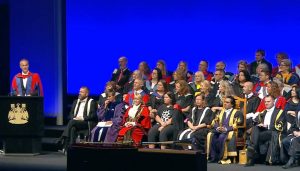 I was offered the lowest paid job in the company, inputting invoices into the computer in the accounts department.

It was the worst job imaginable to give to a dyslexic.

And I loved the company’s founder, Anita Roddick. She not only founded a retailing empire, she was also the recipient of an honorary doctorate from Sussex University.

It’s just a shame I was so terrible at my job!

So terrible that I used to go in on Sundays just so I could keep up with my work without anyone knowing.

That was how I met Anita. One Sunday we were the only two people at work and she spotted me at the other side of the massive office. She came over to talk and my life changed.

From that moment I was championed, pushed and challenged. 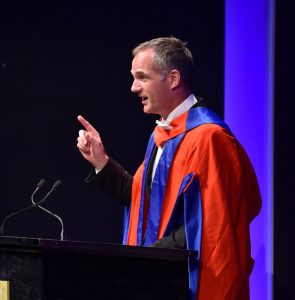 I followed my instinct and became an aid worker, working across the Balkans during the war years.

Travelling together one time, I was telling Anita about the problems I was seeing within the aid industry itself. Many of those problems are now out in the open at last.

But as the close friend that she had become, I also said to her: “I have no formal training. What’s to stop me ending up like one of these people who aren’t good enough to be caring for such vulnerable people?”

She then said something to me that no one else ever had: “You’ve done all this work with your heart. Now it’s time to shift it to your head. You should think about going to university.”

So I went to see a friend at a university, looked around and thought: “I could do this!”

After loads of research, I decided which was the best university in the WORLD for Development Studies – and of course applied to Sussex.

And then, I was rejected.

So, to get the qualifications these people sitting behind me said I needed, I returned to my old secondary school, at the age of 25, and spent a year in a class-full of bewildered teenagers.

Then, I applied again.

And … was rejected, again.

It was on my third attempt that I was finally accepted to study at Sussex.

For me, Sussex was a revelation. I was cocky and outspoken but also sincere and hard working.

Anita Roddick was the first person to see potential in me.

But Sussex University – once I’d battered down its doors – was the first – and remains the only – institution that saw my potential. And term after term it gave me the keys to unlock it.

Thanks to Sussex, I became the first in my family to get an A level, then a degree. And as somebody who never knows when to stop, a doctorate too.

These experiences bequeathed me with many things, most of all a burning political mission and, thanks to Sussex, the skills I needed to capitalise on it.

How many young people just take “no” for an answer and move on? Too many.

How many young people keep going until they succeed? Going back for a second chance? A third?

That’s why we need to get it right for young people the first time, because most won’t come back asking for a second.

And that’s why when I look out across a group of people these days I wonder to myself: how many degrees don’t exist because people took “no” for an answer?

How many doctorates don’t exist, companies not set up, because people didn’t persist?

And for me, worst of all, how many MPs don’t come from backgrounds like mine?

This is what motivates me.

And for you, everyone graduating today has fresh knowledge, networks of friends that span the world and even an institution that will remain here for you, in different ways, for the rest of your lives.

It’s now down to you as to how you put all this to use.

Chance plays a limited role from now on. The major one will be the decisions that you take.

Big decisions are landmarks in our lives. But believe me, the little ones soon add up.

Take responsibility for all of them.

And try, if you like, to remember the lesson of my life so far, which is:

There is nothing inevitable about success.

And there is nothing inevitable about failure too.

But for today, just realise that everyone in this room takes pride in what you have accomplished.

I for one am cheering for each and every one of you who collects a degree today – because I know the struggle behind every success.

So enjoy every moment – and thank you for having me.