Every time I walk past the piano in Brighton railway station I smile. It makes me so happy for lots of reasons. 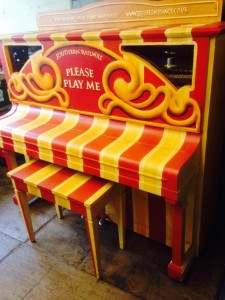 It was four years ago that I put it there and the story behind it is quite funny and taught me a lot of lessons about politics.

I had only been a political candidate for a short time, and the election was a long way off. I was a commuter like thousands of others and was one morning standing on the concourse on a cold, wet day. My train was cancelled and all you could hear was the silent misery of fellow passengers.

I’ve always been interested in how we as a community can fill anti-social space with social activity. Food, music, performance, exercise … I don’t mind, but just *something*! So I took out my phone and posted a tweet saying: “Brighton Station needs a piano. I’ll buy one, if you like!”

The next day I got a shock. The Argus ran a big story along the lines of “Labour candidate to buy piano for station” and BBC Sussex did a morning’s phone-in about “what songs should we play on Peter’s piano at Brighton station”.

Yikes … I was only half serious but I’d better make this happen now. I realised that you can’t say things publicly, even in jest, without thinking it through (Political lesson number 1)!

So I wrote to the CEO of Network Rail and asked if I could put a piano in their station. He wrote back saying “no” but I could speak to a manager to discuss it.

When I called, he said I couldn’t do it “for health and safety reasons”. I asked exactly what the concerns were. There was a long pause and he rather feebly said that the sound of the piano would drown out the tannoy in the event of an emergency. I stifled my laughter and offered to pay for acoustic tests to see if that was true. He said he’d get back to me.

Two days later we spoke again. I was told that they’d overcome their health and safety concerns but they were now going to refuse permission on the grounds that they don’t allow political campaigning on the concourse. Once again I stifled my laughter and said I had two questions. Firstly, can you name a political campaign that was won on the back of an anonymous piano (I wasn’t going to put my name on it, nor my political party. I just wanted it there).

And secondly, I asked him why it was possible for me to buy advertising space on the screens and boards in the station if there was a ban on political campaigning?

There was another long pause and he finally said: “Please, we don’t want this to happen and we don’t know how to make you go away.” This is true, I promise! (Political lesson number 2: Persist.)

So, I met with Network Rail, Southern Rail, the station master, platform staff, and everyone else with an interest and I reassured them that I wouldn’t make life difficult for them and I would take a list of their concerns and make sure every one was taken into account. (Political lesson number 3: Don’t bully people. A little bit of charm goes a long way in politics!)

And then, like an angel sent from the heavens, I got a message from the Brighton Piano Warehouse. They loved my idea and wanted to work with me to supply the perfect piano for Brighton station. (Political lesson number 4: It takes many people to make great things happen and usually the most amazing people are those who really want to do something special but have never had the opportunity before.)

It took 10 months to pull it off. Like our trains, there were many delays. Regulations that needed complying with. Promises about locks and keys and maintenance. But then, finally, we got the date: 1 August 2014.

We all came together, unloaded the piano with all the station staff joining in the fun. And there it’s been ever since.

So now you know why I love it so much. It seems like such a small thing, but to me it means the world. Every time I see it being used it makes me so happy. But I also have a favourite story about it.

I was coming home from work one day and heard the piano as soon as I got to the barriers. It was being played so beautifully. There was a crowd and I went to join it. The guy who was playing was wearing high-vis clothing and next to him was a huge plastic bag full of rubbish from the train. His job was to collect the rubbish we leave behind, but between train arrivals he used to play the piano.

When he finished, the whole concourse erupted in applause as he picked up his bag and headed off to the train I’d just arrived on to collect the rubbish.

Think about it. Day after day after day, this man cleans up without most of us even noticing. But there it was, the whole station applauding him! It took the piano to make that happen and I was bursting with pride at what we’d all done in putting it there.

So political lesson number 5 is this: politics isn’t always about who’s up, who’s down or who’s screaming in the Commons. It can be a simple act that helps us see people in a different light or change the way we interact with the space around us. It really can be as simple as that.

Despite all the problems with our rail network, I hope you can spare a little affection for that little old piano when you next pass. I do every time!