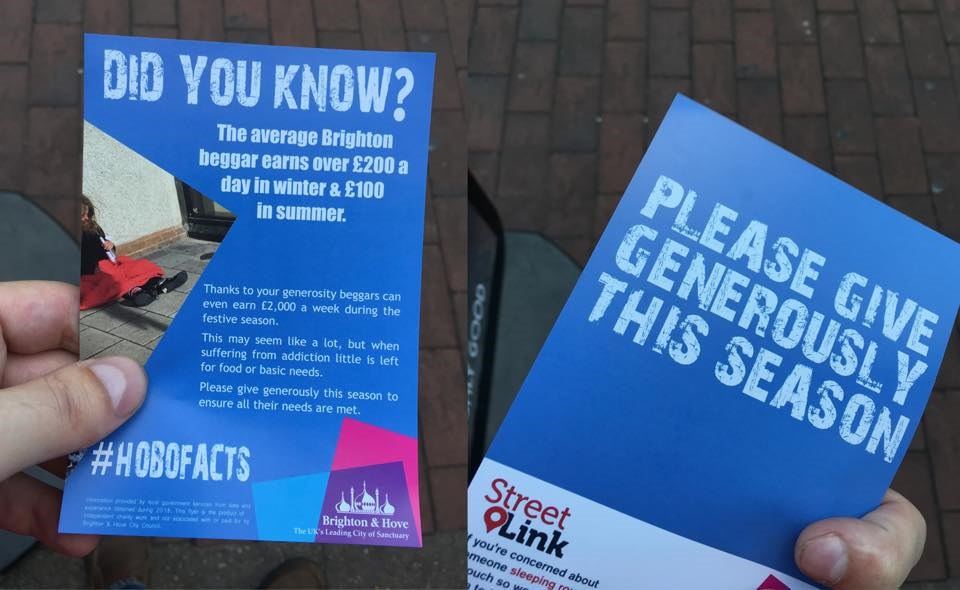 “Nasty and irresponsible” flyers claiming beggars earn £2,000 a week and urging people to give more as after “addiction little is left” have been handed out in Brighton this week.

The leaflets come just a few weeks after posters, also bearing the city council logo, announcing that communal bins had been designated as rough sleeper accommodation were put up around the city.

They have been condemned by the council, which urged people to donate to the homeless through its Make Change Count initiative.

A picture of the flyer was posted on Twitter by Tom Pickard, whose friend was given one by someone wearing a t shirt bearing the same logos near Churchill Square.

“Someone got handed one near Churchill Square. He thought it was real as it had loads of correct information and he said the person handing them out had a t-shirt with the logo on etc.

“It’s a very good fake, trying to cause trouble I think. I really hate stuff like this, and in a world of fake news it’s taken as is.”

A council spokeswoman said: “The flyer about street begging is irresponsible and nasty and nothing to do with the council. Despite the flyer’s small print which says it’s not associated with or paid for by Brighton & Hove City Council, the misuse of our logo is misleading and a breach of copyright.

“If you’re worried about homelessness or concerned about people sleeping rough in the city, please visit www.brighton-hove.gov.uk/homelessness for advice about what you can do.

“You can also find advice on donating to charities who support people living on the street by searching for Make Change Count on our website.”